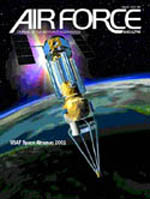 The Purpose of War

By John T. Correll
The objective is not to destroy the enemy but to gain a strategic result.

Washington Watch: In Pursuit of a Strategy

By John T. Correll
The QDR is on a "forced march" with Rumsfeld and top Pentagon leaders calling the cadence.

Send in the UCAVs

By John A. Tirpak
The Air Force is pursuing Uninhabited Combat Air Vehicles in a big way.

By Adam J. Hebert
Air Force Special Operations Command wants the CV-22 and believes its problems can be fixed.

By Stewart M. Powell
The Kremlin wants to tackle long-festering problems, and painful reform can't be avoided much longer.

USAF supports scientists at one of the most inhospitable places on Earth.

By Tom Philpott
Mismanaged health care budgets pull funding from base hospitals, readiness, and other programs.

By Peter Grier
US Indicts 14 in Khobar Towers Case A US federal grand jury on June 21 indicted 13 Saudis and one Lebanese national in the 1996 terrorist bombing of the Khobar Towers complex in Saudi Arabia–a terrorist act which killed 19...

By Robert S. Dudney
The End of Infamy “The Pentagon did not take an active role in trying to influence the portrayal of Japanese forces [in the controversial Disney movie “Pearl Harbor”], but we noted from the outset that the film did not intend...