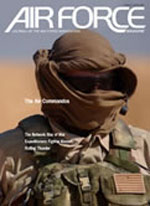 By Robert S. Dudney
Many still find it easy to discount the value of airpower.

The Network Way of War

By John A. Tirpak
Data flowing to and from all Air Force elements will cause a dramatic new form of combat.

By Adam J. Hebert
Air Force special operators are in heavy demand and perpetual motion around the world.

By Rebecca Grant
The Air Force says it wants a STOVL F-35. Is it right for today’s combat environment?

These rare World War II images offer a portrait of dedicated airmen in an all-but-forgotten corner of the world.

The Rumsfeld Pentagon focuses on other dangers.

By John T. Correll
It was our best chance to knock North Vietnam out of the war, but it was doomed to failure.

By Walter J. Boyne
The genius of this singular officer lives on in the modern United States Air Force.

From Air to Ground

By Bruce D. Callander
In World War II, troops came on parachutes and in gliders, and the pathfinders helped them get there.

By Adam J. Hebert
Reservists Take Guam Rotation Approximately 300 airmen with the 93rd Bomb Squadron, Barksdale AFB, La., deployed in January to Guam to fulfill an Air and Space Expeditionary Force (AEF) rotation of heavy bombers to the region. They relieved an active...

By John T. Correll
Part of History “In five years or 10 years or 20 years when you’re talking to your children or your grandchildren, you’re going to be able to look back on your service here and what’s been accomplished in this country...