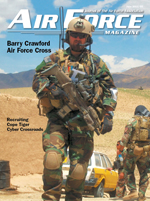 By Adam J. Hebert
USAF must solve the F-22’s oxygen problem to change this narrative.

Caught in the Crossfire

By Marc V. Schanz
US forces go to “war” with the Thai and Singaporean Air Forces in an ever more important large-force e

By Michael C. Sirak
The Air Force’s recruiting service, smallest among the military branches, is reinventing itself to att

By Aaron M. U. Church
Air Combat Command aims to place Active Duty pilots and maintainers in every Guard and Reserve fighter

By John A. Tirpak
Air Mobility Command is carefully realigning its plans to accommodate the new defense strategy and tig

At a Cyber Crossroads

By Amy Hudson
The Air Force is at the front of the cyber frontier, where the threats are numerous, nebulous, and dan

The Austerity Budget Hits the Hill

By Peter Grier
Nancy Hoover, AFA’s National Teacher of the Year, uses a multidisciplinary approach to get kids hooked

They Called It Star Wars

By John T. Correll
The critics sneered at it, but the Soviets weren’t so sure.

By Rebecca Grant
The North Vietnamese forces massed, and that opened them up to attack from US airpower.

By John A. Tirpak
Replacing aircraft on the fly; No rest for the weary Air Force; The essential F-35; A Hostage warning;

By Aaron M. U. Church
First C-17 Retires The Air Force’s prototype C-17 transport recently retired to the National Museum of the US Air Force in Dayton, Ohio, ending 21 years of testing at Edwards AFB, Calif. “This aircraft will serve as the representative C-17...

Is the “Oil Weapon” Fading Away?

Yeah? No. I take exception to Lieutenant Colonel Piowaty’s critique of John Correll’s article, “The Man From Thud Ridge” [“Letters: Lie, Cheat, Steal,” May, p. 8]. I flew a tour in Thuds from Takhli and knew both Broughton and Piowaty....

By Frances McKenney
Doolittle Raiders: 70th Reunion Air Force Association Chairman of the Board S. Sanford Schlitt attended the Doolittle Tokyo Raiders reunion in Dayton, Ohio, in April. AFA Board Chairman Sandy Schlitt (standing, at right) applauds during a B-25 flyover at the...