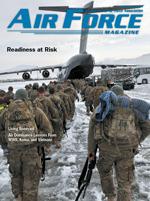 The Perils of Air Parity

By Aaron M. U. Church
Air Force Global Strike Command’s bombers and missile forces are at an increasing level of readiness.

By John A. Tirpak
The Aerospace Maintenance and Regeneration Group runs a warehouse, not a graveyard.

By Peter Grier
The Atlantic alliance is as important as ever, but the US will face new challenges in getting its part

By Marina Malenic
Military aircrews are mastering the art of treating injured troops on the move. 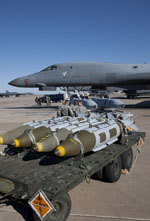 Blue Skies for the B-1

The Crucible of Vietnam

By Rebecca Grant
From 1964 to 1973, the Air Force paid a terrible price in lives and aircraft.

By Walter J. Boyne
The crash reports were a sobering litany of human error and design problems that are unthinkable by to

By John T. Correll
In the Spanish Civil War, the Luftwaffe practiced for World War II.

The Blooding of America’s Jet Fighters

By Jack Broughton
The first US pilots in Korea had to learn on the job, in the toughest possible way.

Air Dominance From Normandy to the Bulge

By Richard P. Hallion
With control of the skies, the Army Air Forces relentlessly pounded the Germans.

By Robert S. Dudney
No Fun, Part I “Let’s not even pretend we’re going to get a Secretary [of Defense] who can keep the force from going hollow. For the next couple of years, this job just isn’t going to be a lot of...

What Wilbur Thought of Gas Bags

Sniveling, Immature Whiners [“Editorial: Walking on a Cliff,” December, p. 4] should be mandatory reading for every member of our “moaning-groaning” legislative and executive branches to inspire them to quit the argumentative partisan attitude and get this matter resolved in...

By Frances McKenney
How To Make a Big Splash When Howard L. Burke of the Red Tail Memorial Chapter in Florida received his Air Force Association Medal of Merit, he garnered prominent coverage—both for himself and for AFA. The local Star-Banner daily newspaper...