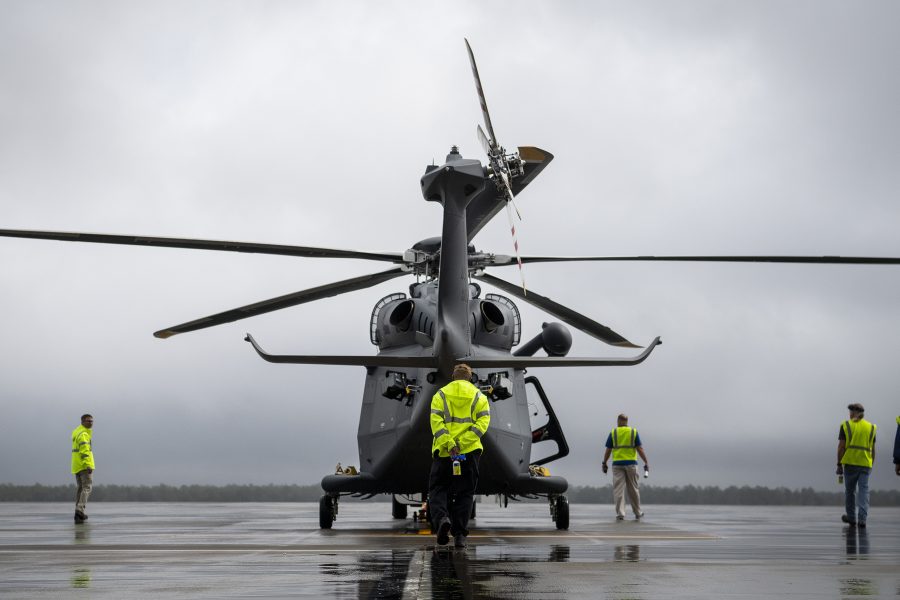 The Air Force completed its first combined test flight of the MH-139A Grey Wolf with manufacturer Boeing on Feb. 11, the service said in a Feb. 19 release.

Testing at Eglin Air Force Base, Fla., is the first time Air Force pilots get to vet the new helo, which will replace the Vietnam War-era UH-1N Huey as a nuclear missile field patrol and VIP transport aircraft.

Air Force Global Strike Command, which is buying the chopper fleet, did not immediately provide more details about what the Grey Wolf did during the event.

A test detachment stood up at Eglin’s Duke Field in December, and that work will last into mid-2022. The Air Force plans to buy up to 84 operational and test aircraft at a cost of $2.4 billion, starting with eight deployable helicopters in fiscal 2021.

The service’s buy plan laid out in the 2021 budget request shows the service wants to purchase eight each year until 2023, then ramp up to 15 a year starting in 2024.

At Eglin, a small number of airmen and a few aircraft are just not starting up the aircraft’s developmental testing. Five pilots, six special mission aviators, and four helicopters will go through the ringer in the Florida Panhandle for this earlier phase, before moving north to Malmstrom AFB, Mont., for operational testing next year, said Lt. Col. Mary Clark, commander of Detachment 7 at Eglin, which is overseeing developmental tests along with the base’s 413th Flight Test Squadron.

The crews assigned to Eglin come from all the areas and mission sets that the UH-1N currently serves.

There are hundreds of test points to accomplish. Each one requires days of behind-the-scenes work on top of the flying hours, with briefings before and after flights, test plan development, and more.

This first test plan is linear, with clear-cut requirements to meet. In early 2020, as pilots are starting to get to know the aircraft, they will focus on “really binary” characteristics of the aircraft, Clark said.

For example, does the Grey Wolf “fly as fast as Boeing said it can fly? Does it carry as many people as they say it carries?” Clark said.

The Air Force asked for armed, armored helicopters that can carry at least nine troops and cruise at a minimum speed of 135 knots, among other specifications.

As the test program progresses, “We’ll start getting really into the meat of it, its handling qualities, how the aircraft performs with different inputs, conditions, power settings,” she said.

The service expects the MH-139’s test effort to be significantly shorter than usual because it is based on Leonardo Helicopter’s civil AW139.

“While we’ve militarized it, the basic platform has been known for so long,” Clark said.