Skip to content
An HH-60W Jolly Green gets hit with 45 mph winds and drenched under 130 gallons-per-minute rain in the McKinley Climatic Lab April 1 at Eglin Air Force Base, Fla. The Air Force’s new search and rescue helicopter and crews experienced temperature extremes from 120 to -60 degrees Fahrenheit as well as torrential rain during the month of testing. The tests evaluate how the aircraft and its instrumentation, electronics and crew fare under the extreme conditions it will face in the operational Air Force. Air Force photo by Samuel King Jr.
Expand Photo 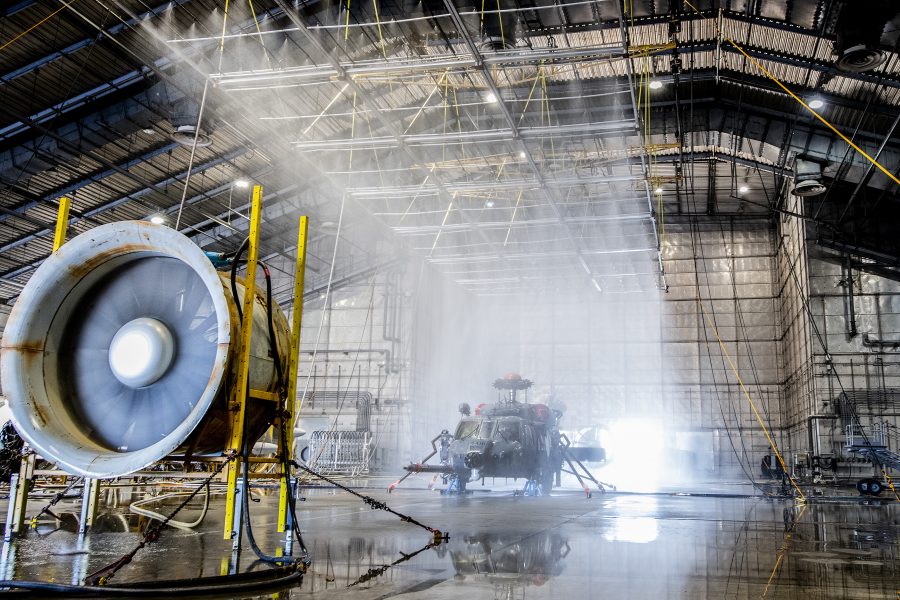 The Air Force’s new combat rescue helicopter recently faced extreme temperatures and winds to prove the HH-60W Jolly Green II can be sustainable in any environment.

The helicopter on April 2 finished a month-long test process at Eglin Air Force Base, Fla., in which it faced temperatures ranging from 120 degrees to negative 60 degrees Fahrenheit, along with 45 mph winds and rainfall, according to a base release.

Eglin’s McKinley Climatic Lab hosted the tests, in which aircrews would enter the helicopter after it was exposed to the environments to conduct preflight checklists and other steps to see if the wide range of conditions impacted the chopper’s avionics, electronics, and engine, according to the release.

“Checking system performance under the stress of heat, cold, heavy wind, and rain will give us real-world data regarding the helicopter’s capability to perform the rescue mission worldwide in various environments, which is exactly what the operator needs to make solid employment decisions,” Lt. Col. Ryan Coates, a pilot with the 88th Test and Evaluation Squadron, said in the release.

To conduct the test, lab personnel were forced to remove the helicopter’s blades and create a new system for the aircraft’s exhaust, the release states.

Following the successful tests, the HH-60W heads back to Sikorsky for additional evaluation.

The recently named Jolly Green II is under production as part of a $7.1 billion program, with a planned buy of 112 helicopters to replace the current HH-60G Pave Hawk. Deliveries are scheduled to begin in the second quarter of fiscal 2021.