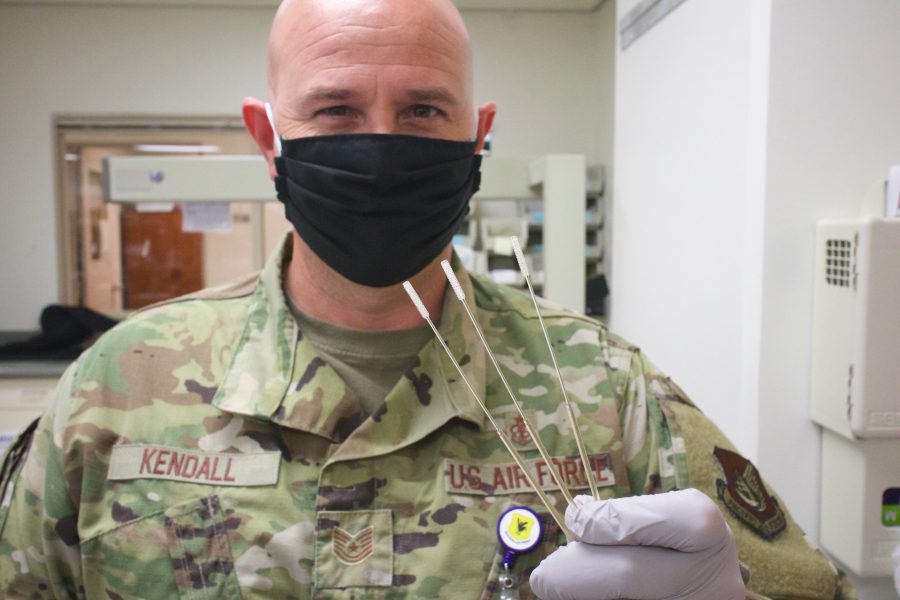 KADENA AIR BASE, Japan—The Regional Dental Laboratory here usually uses its 3D printer to make dental prostheses for Active-duty troops and dependents from around the Indo-Pacific Command area of operations. But when the new coronavirus pandemic caused Defense Department medical facilities to stop non-emergency procedures, the Airmen of the 18th Dental Squadron decided to use their skills and resources for something other than dental work.

Initially, the Airmen were making N95 masks with the printer. But with so many other military units printing masks—and medical guidance that came out later advising against 3D printing N95 masks—the team got online and “started looking for more innovative ways” to help out, Master Sgt. Cory La Salle, the lab’s flight chief, told Air Force Magazine.

They made personal door handles, so people wouldn’t have to touch the common-use door handle. They made face shields. And then Maj. Junhyung Park, the lab’s flight commander, read about 3D printing nasopharyngeal swabs.

The swabs, which resemble large Q-tips, are a critical component of COVID-19 testing.

Park said the article he read mentioned the manufacturer of the 3D printer that made the swabs, and it was the same company that made the printer in the dental lab. So he reached out.

The design and method for printing the swabs was developed by the University of South Florida and Northwell Health—New York’s largest health care provider—and is patent-protected, Park said, but they were able to get it through the 3D printer company. But printing the swabs is not as easy as just programming the printer with a ready-made design.

“This is a medical device, so it needs to go through a rigorous process” of testing to make sure it’s safe for use on patients, Park said. The lab has printed hundreds of swabs to determine the best way to do so, establish standard operating procedures, and work through any problems.

The swabs are made of resin, so Park said they initially thought they would be too rough for their intended use. But because of the way it prints, it comes out soft.

After they come off the printer, La Salle said, they’re washed in alcohol, dried, then light-cured to harden. They print 324 in a batch, and because of an update by the company, the process now takes from 11 to 15 hours, instead of the 30-plus hours it took previously.

The lab has documented its efforts and put together a package that is almost ready to send to the Food and Drug Administration for approval, but there’s one problem: Kadena hasn’t had enough positive patients to complete the testing process.

“We’re kind of on hold right now,” Park said, adding that they have sent what they’ve learned to the COVID Additive Manufacturing Task Force, or AMTF, which is overseeing the 3D printing effort across the Air Force, so others have been able to use the information.

La Salle said the pivot from making dental protheses to face shields and testing swabs was not unusual, because innovation is “in a dental lab’s blood.” Lab techs “already kind of have that thought process,” he said.

And though they haven’t been able to use the swabs yet, Park said that doing “non-dental was a great opportunity” for the team to work together, and helps empower the Airmen while supporting a “culture of innovation” in the squadron.