Skip to content
This Kadena Air Base courtesy photo shows smoke from the blaze.
Expand Photo 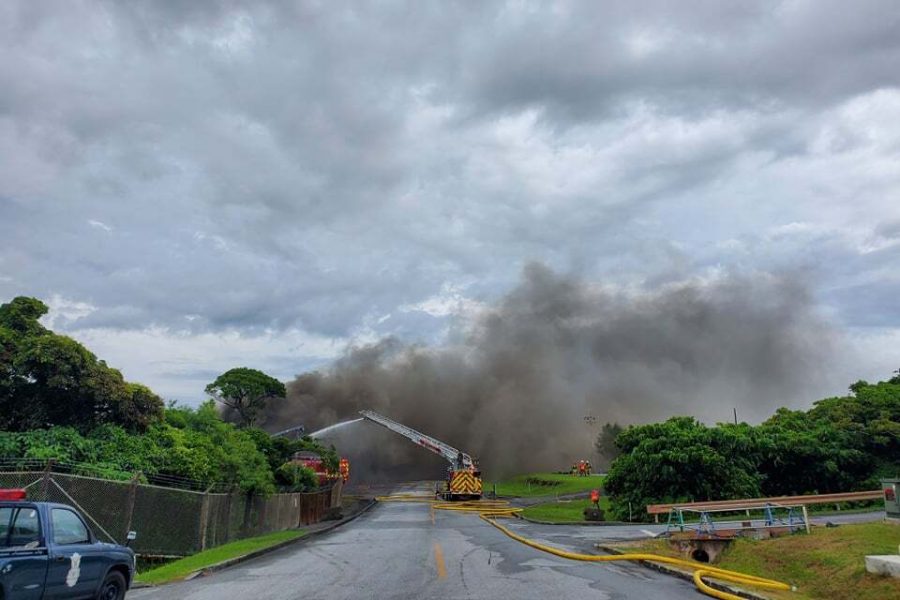 Kadena Still Investigating Cause of Fire at HAZMAT Facility

OKINAWA, Japan—Kadena Air Base officials have moved into the “recovery phase,” which includes a thorough investigation, after a fire at a hazardous materials storage facility June 22 resulted in about 100 people being treated for symptoms of smoke and chlorine gas exposure.

Chlorine gas was released into the air when the water sprayed to put out the fire mixed with calcium hypochlorite stored in the building, according to an 18th Wing press release. Airmen from the Bioenvironmental Engineering Flight “determined the chlorine gas traveled no farther than 1,000 feet from the building,” the press release states. Base officials do not know what caused the fire.

June 22 was very rainy, with precipitation ranging from light sprinkling to torrential downpour throughout the day. That water, combined with the water firefighters used to put out the blaze, may have caused residual hazardous materials to run into the storm drains, though base civil engineers who monitored the storm water did not find “anything unusual” in the run off, the wing said.

Members of the Okinawa Defense Bureau visited the base June 23 to see the site of the fire and get an update on recovery and response efforts, the base said.

In April, 38,000 gallons of firefighting foam leaked from the Marine Corps air station on Okinawa into a local stream and neighborhood after the fire-suppression system inside a hangar was triggered, prompting a Marine general to apologize to the Okinawan government, Stars and Stripes reported.