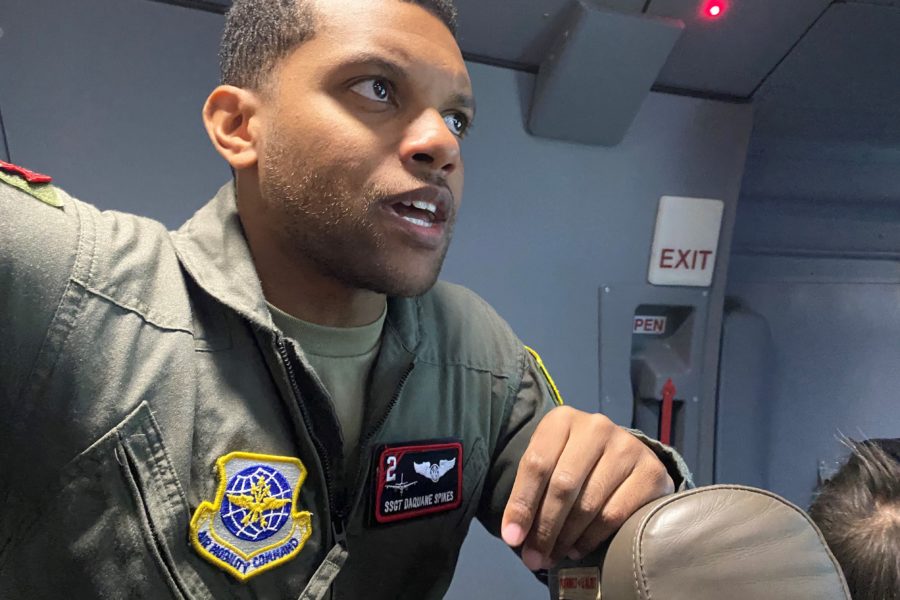 JOINT BASE MCGUIRE-DIX-LAKEHURST, N.J.—The KC-46 boom operators stopped talking and leaned in as New Jersey Air National Guard F-16s approached a refueling mission over upstate New York in July. The fighters were visible on a 1,080-pixel, black-and-white screen as they lined up behind the boom. The cockpit went quiet, too, and the pilot flipped to a visual of the aerial refueling as he listened for possible instructions from the boom operator, who chatted with the receiving aircraft.

Blackouts and washouts on KC-46s’ video displays during refueling, caused by shadows or direct sunlight, will remain a problem until the fleet’s Remote Vision System (RVS) 2.0 is ready. But after hundreds of hours of missions from the Pacific to NATO’s eastern flank, the boom operators have nevertheless learned to refuel most types of aircraft the Air Force flies.

Workarounds include software upgrades and a procedure by which receiving aircraft have to back away and approach again as the boom operators toggle between different visual displays. The results have amounted to better refueling accuracy but more delays.

“It can take anywhere from five minutes to 30 minutes,” explained Staff Sgt. Daquane Spikes of the 2nd Air Refueling Squadron, 305th Air Mobility Wing, of Joint Base McGuire-Dix-Lakehurst, N.J., describing the delays as he looked over the shoulder of a fellow boom operator instructor during the F-16 refueling.

“As far as the washout and the shadows, I normally notice it as the receiver is coming into contact,” he said.

Depending on how dark the shadow is, the boom can be completely blacked out on the display screen as it nears the receiver.

“You would probably not be able to see the receptacle in the boom, which would make you expect to lose your depth perception,” he said. “Then, you send them back and alternate your 3D camera scenes.”

Senior Airman Jon Vermont, sitting at the left boom operator console, explained how changing the scene gets around the defect.

“As the sun is changing [in] distance over the horizon, and [depending on] what degree it’s at, we need to change our scenes to match with it, to keep a good visual on the receiver itself,” Vermont said. “We’ll switch views, but the only time that we’re switching views is when the receiver is at 50 feet or farther aft.”

The limit on when a boom operator can switch scenes is due to another deficiency in the system: The screen blacks out for an instant with each turn of the knob. The Air Force requires that every time conditions such as clouds or lighting degrade the visual display, a boom operator must send the receiving aircraft back to 50 feet astern, then change the scene, before the aircraft begins a new approach.

“If we’re in a position where the sun is just beaming down on us and we can’t find a correct scene, we have to bring the receiver in and back them out multiple times,” Spikes said. “In a wartime situation, the less time that the receiver is around the boom, the more time they have to do whatever mission set they have that day.”

As of May 31, the KC-46 had received interim capability releases that permit it to refuel 97 percent of U.S. Transportation Command taskings. That includes most bombers, tankers, and fighters as well as airlift and intelligence, surveillance, and reconnaissance aircraft. The only aircraft still not approved for refueling from a KC-46 include the A-10, B-2, CV/MV-22, and E-4B.

Still, however, the KC-46 is not approved for combat operations.

RVS 2.0 is expected to alleviate problems in depth perception with new cameras and a full-color, high-definition screen. Also, between scene changes, the screen will no longer blink black, meaning the boom operator will not have to send the receiver aircraft back aft.

‘A Sense of Deliberate Haste’

Commander of Air Mobility Command Gen. Mike Minihan told Air Force Magazine that the series of interim capability releases he issued over the past year have been meant to make the KC-46 operational and its crews trained and ready for the upgrade.

“Certainly, there are challenges that we have to plan a way through,” Minihan said in a July 28 phone interview.

“Some of the sunlight, some of the angles, some of the weather can make the crew have to do some planning that overcomes the limitations of the first [RVS] series,” he said, referring to coordination between receiving pilots and boom operators.

In some cases, boom operators may wait to begin aerial refueling until the receiving aircraft is positioned differently relative to the sun. Boom operators communicating directly with the receiving pilots may ask them to reposition the aircraft.

“I’m making sure that we all understand that there is a sense of deliberate haste when it comes to getting the 46 on step with RVS 2.0 and also them coming off the line with all those fixes already incorporated,” Minihan said of his discussions with Boeing.

Many KC-46s have upgraded to an “RVS 1.5” system, but the KC-46 on the July refueling flight was still operating on a lesser software upgrade, Vermont said.

Boeing has promised to deliver the RVS 2.0 system by fiscal 2023, but Minihan could not provide any further specifics on that timeline or how upgrades to current aircraft would be coordinated without losing AMC refueling capacity.

One thing is certain, boom operators with hundreds of hours of experience on older refuelers still prefer the KC-46, even with its current drawbacks.

Unlike KC-135 boom operators, for example, the KC-46’s boom operators don’t need to continue controlling the boom once it locks in to a receiver.

A number of other advantages benefit receiving aircraft, Vermont said. The retiring KC-10’s third engine on the tail creates a draft as receivers approach the boom, while older KC-135s are “a little shaky,” making it harder for receivers to close in on the boom.

“I’ve never had an auto-disconnect on me while doing AR,” Vermont added. “In previous tankers like the 135, if I had a C-5 behind me and he did a rapid movement, it could kick off our autopilot and cause a dangerous situation. I’ve never had anything like that happen.”

The KC-46’s autopilot also makes the possibility of a midair collision less likely. That’s because the newer system is able to adjust to the bow waves created by any sudden changes made by a larger cargo plane receiver, instead of shutting off and handing controls over to the pilot.

One way Minihan has sped up operational use and experience with the new plane has been to send it on employment concept exercises. In April, four KC-46s deployed to Moron Air Base, Spain, to help refuel NATO air policing missions over NATO’s eastern flank, and in June, KC-46s were used in an Indo-Pacific exercise out of Yokota Air Base, Japan.

The result has been more flying hours for crews on the new platform in priority theaters.

“The people that fly, fix, and support it love it. If you talk to the receivers that are refueling off it, they love it, too,” said Minihan, who has regular in-person meetings with Boeing executives to ensure that the coming RVS 2.0 upgrade remains on schedule and is quickly adopted across the AMC KC-46 fleet once ready.

“My favorite soundbite from one of the most experienced KC-46 boomers is, ‘I’ve never missed a plug,’” said Minihan, while emphasizing that AMC is preparing “an exquisite ballet” to ensure that no operational units are affected by the RVS 2.0 upgrade. “The timelines are still being worked, but it’s sooner rather than later.”