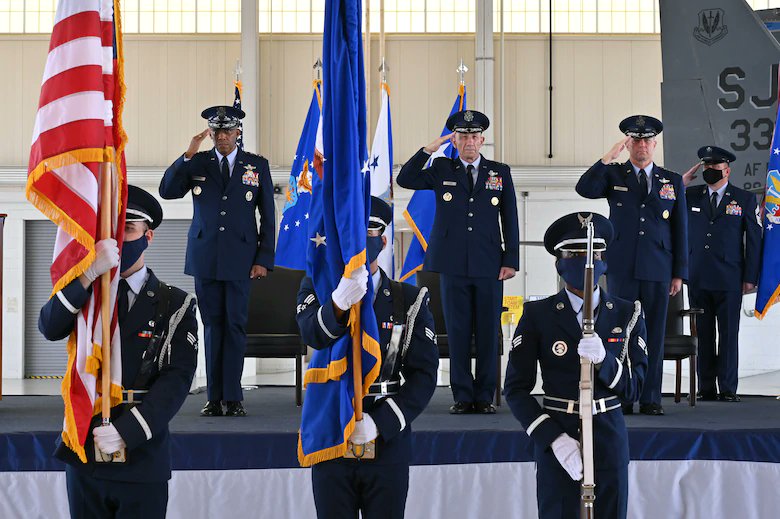 Gen. Mark D. Kelly on Aug. 28 took charge of Air Combat Command from Gen. James M. Holmes, who retired after a 39-year career. Holmes was regarded as a visionary by his peers, and was one of the most influential commanders of Air Combat Command, making more structural changes than virtually any other head of the command since it was created in the early 1990s.

Kelly is an ROTC graduate whose 34-year Air Force career has largely been in the F-15E. He had an exchange tour with Australia, where he flew the F/A-18, and has been a combat commander in Afghanistan, with tours in the Pacific, Alaska, and Southern Command.

New Chief of Staff Gen. Charles Q. Brown Jr., who presided over the change-of-command ceremony at Joint Base Langley-Eustis, Va., said Holmes was an intellectual leader in the Air Force. In addition to the callsign “Mobile,” Holmes’ peers referred to him as “The Sensei” and “Graybeard,” Brown said, “not because he’s the oldest, … but because he brings the most wisdom, the most experience, and the most vision” to the senior leadership. Holmes led ACC since March 2017, and before that, was deputy chief of staff for strategic plans and requirements.

Kelly praised Holmes as having not big shoes to fill but “it’s his hat size that’s daunting, because about 45 seconds ago the collective IQ of Air Combat Command took a hit.”

Holmes has “never been afraid to challenge the status quo” in pursuit of greater combat capability, Brown asserted, calling him “laser focused on bringing the future faster, accepting risk, and pushing limits to combine and improve weapon systems and tactics in new, faster, and cheaper ways.” Holmes looked for “untapped capabilities” to increase USAF’s fighting power without requiring more resources.

Holmes never failed to deliver requested combat capability during his tenure, Brown added, providing more than 5,000 aircraft across 22 separate contingencies with 80 percent combat capability, including the first combat deployment of the F-35 strike fighter in the U.S. Central Command theater.

Among Holmes’ marquee achievements during his ACC tenure was the creation of 16th Air Force, cobbling together USAF’s cyber, weather, and intelligence, surveillance, and reconnaissance enterprise in a single coherent fighting information warfare organization. The new enterprise is “exactly the type of command our Air Force needs to compete and deter; and if deterrence fails, to fight and win in an age of Great Power Competition,” Brown said.

Brown praised Holmes’s devotion to the mantra “mission first; people always,” and his having taken “good care” of the 159,000 Total Force people under his command. On Aug. 27, Holmes was inducted into the Order of the Sword by USAF enlisted personnel; their highest honor for officers.

Holmes led the recovery after natural disasters scoured Tyndall Air Force Base, Fla., virtually off the map and flooded Offutt Air Force Base, Neb. He “secured the funds” and began the restoration of both facilities, Brown noted. Holmes also used the event to consolidate the F-22 force into fewer but more robust formations, which helped increase their mission capable rate.

Holmes received the Distinguished Service Medal later in the day, the citation noting in part that he increased the mission readiness rate of ACC assets 40 percent in two years.

In order to address the chronic pilot shortage problem, Holmes also pushed for a new fighter pilot training system, called Reforge, that will reduce the time necessary to “grow” a student pilot into a fighter flight lead by as much as 18 months. The new system is expected to deliver more pilots, faster, for fighter units, which in turn can devote more of their precious flight hours to employment operations and less to training.

Before the National Defense Strategy was created in early 2018, Holmes was already alerting the defense community to the need for a re-think of American military posture. In November 2017, in an AFA speech, Holmes explained how the U.S. can no longer expect “sanctuary,” either at home or in its wartime preparations, due to ubiquitous satellite coverage and precise long-range fires. He was the first to start referring to China and Russia as “peer adversaries” rather than “near-peers,” and warned that the U.S. needs to shake off the complacency of believing itself unchallenged as the world military leader. The currency of future war will be reliable data, he said, and playing offense in information warfare to get adversaries to doubt their own data.

He also warned that the U.S. can no longer take 20 years to develop a new combat platform, and embraced acquisition chief Will Roper’s digital Century Series idea of fewer, but more frequent iterations of new systems, even pushing his ACC strategists to re-think the question, “What is a fighter?”

“No one is more qualified to take the reins” of ACC than Kelly, callsign “Grace,” said Brown. He praised Kelly’s “intelligence and tenacity,” extensive combat experience, ability to build and lead teams, and two stints as a wing commander. Holmes said Kelly, who taught him to fly the F-15E Strike Eagle, “made me a better aviator and officer.” The backdrops for the event were an F-15E from Seymour Johnson Air Force Base, N.C., and a T-38 from Joint Base Langley-Eustis, Va.

Kelly, who pinned on his fourth star just hours before, promised to maintain “the intellectual rigor” of Holmes’ tenure and the “foundation of trust” between ACC and the rest of the combat team. He offered a comment from former Joint Chiefs of Staff Chairman Marine Corps Gen. Joseph F. Dunford Jr., who made an “unscripted, unsolicited” comment about ACC when the two ran into each other last year. “Whether it’s air, space, or cyber, Airmen thrive where there is no precedent, step forward where there is no predecessor, they do so with pride, energy, and efficiency, and they find a way to win,” Kelly said, quoting Dunford.