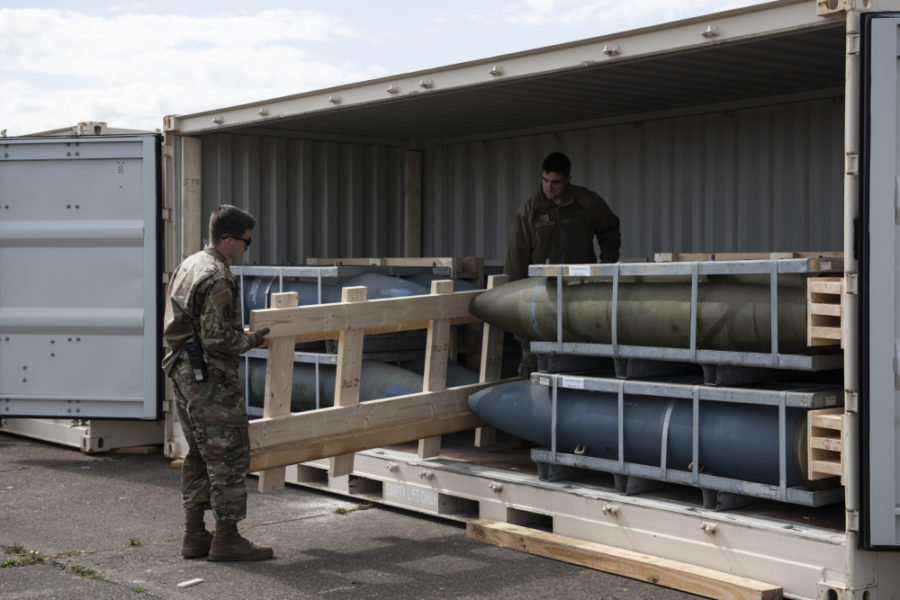 Frank Kendall, nominee to be Air Force Secretary, told Congress he may support dual-sourcing munitions in order to ensure a surge production capability.

Among 58 pages of written answers to SASC committee member questions prior to his May 25 confirmation hearing, Kendall said he will revisit the munitions requirements process if he is confirmed, such that it involves allies who use similar munitions. He will take a look at “the cost and benefits of creating additional industrial capacity to meet surge requirements to support contingencies.”

Kendall also said he’d oppose any new jointly run acquisition programs, particularly command and control systems, and hinted that he doesn’t think the Air Force’s mix of fourth- and fifth-generation aircraft will be “optimum” for the next decade or more. Such answers for the record must be carefully worded such that the nominee does not seem to be presuming confirmation.

The Air Force suffered several bouts of munitions shortages in the 2000s and 2010s, driven both by its underfunding munitions accounts and because allies drew upon U.S. stocks during conflicts in Libya, Syria, and Iraq. It was later revealed that some allies expected to draw on U.S. stockpiles in any coalition conflict, with the plan to reimburse the U.S. for those weapons expended. The Air Force has since urged allies to restock, warning that the USAF may be able to fund only its own munitions needs in the future.

Kendall said he would “assess the requirements system to ensure our partners remain combat relevant in support of combatant commander regional objectives.” He also said he would see to it that “ally capability and capacity requirements are understood and integrated” into Department of the Air Force processes.

He would further explore “consolidation of program elements to generate flexibility to meet changes in replenishment rates,” as well as more efficient business practices, including multi-year procurements “based on design maturity.”

During the Cold War, the military services often maintained dual-source industrial capacity on radars, engines, munitions, and other critical defense goods to ensure sufficient surge capability in wartime. Frequently, a competition was held for a system, and the winner’s design was developed and produced, with a second source—often the loser of the competition—later brought in to offer a similar product that met the same form, fit, and function. Annually thereafter, the two sources competed for the larger share of production orders. The inherent inefficiencies of dual-sourcing were often overcome by aggressive competitive pricing between bidders. A noteworthy example of this approach included the “great engine war” between Pratt & Whitney and General Electric on the F100 and F110 fighter engines.

Kendall also discouraged pursuit of jointly managed acquisition programs, saying they have an “abysmal record” and that acquisition success is far more likely if one service runs a program that the other services then simply buy.

Joint acquisition programs, “especially [command, control, and communications] programs, have an abysmal record,” he said. The most successful joint programs have “a single-service lead and are purchased by other services once they get into serial production.” Directly answering whether he would encourage such efforts, Kendall said he would suggest joint programs only “where there was a clear lead service, strong commitments by all participants, and strong economic incentives.”

Kendall, whose last job at the Pentagon was as undersecretary of defense for acquisition, technology, and logistics, has previously criticized joint programs for poor performance; notably the structure of the F-35 Joint Strike Fighter program.

If confirmed as Air Force Secretary, Kendall would likely have to argue against an overall joint multi-domain command and control system, potentially pushing for the other services to simply adopt the standards and architecture of the Air Force’s Advanced Battle Management System.

He further hinted at this in other answers, where he said there are “challenges in making the Air and Space Forces more effective contributors to joint and combined operations.” Some of these, in which the Department of the Air Force “will play a critical role,” include, “the operational resilience and support to operations provided by the Space Force, and the achievement of integrated command and control between both the Space Force and the Air Force and with our other services and allies.”

Asked about the right mix of fourth- and fifth-generation fighters, Kendall answered that “some mix” of the two kinds of aircraft “will be a reality for over a decade.” Based on his previous experience as the USD/AT&L, “it will still be some time before we can purchase enough fifth-generation fighters to have an optimal mix,” suggesting he thinks the Air Force won’t have enough of the more advanced aircraft. He said he understands that the Air Force has recently wargamed the ideal mix of fourth- and fifth-gen fighters alongside the developmental Next-Generation Air Dominance (NGAD) fighter. Once he’s able to review those results, he can “apply appropriate budget constraints and choices that balance near- and longer-term risk.”

Kendall also said he endorses the 2018 National Defense Strategy, but said it fell short in that it “underemphasized the importance of our allies and partners.” He also said that as the Biden administration conducts its Global Posture Review, USAF will have to explore new operational concepts.

It will require “an understanding for the need to make some global presence tradeoffs as we reprioritize for near-peer competition.”