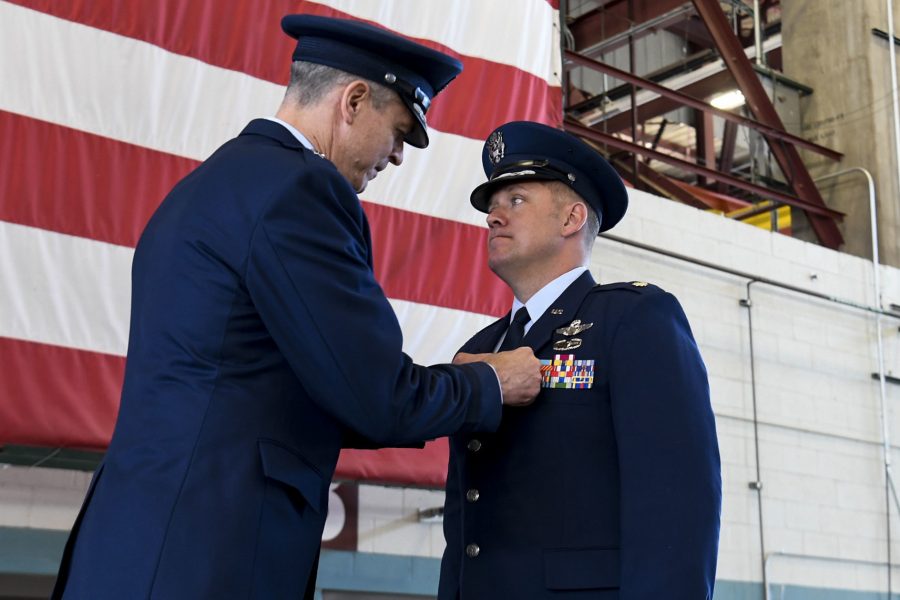 Two special operations CV-22 Osprey pilots and a special missions aviator on Nov. 3 received awards for evacuating forces before and after the Jan. 7 Iranian ballistic missile attack on al-Asad Air Base, Iraq.

The attack, which came in response to the U.S. killing of Iranian Quds Force commander Qassem Soleimani, injured more than 100 personnel and heavily damaged al-Asad. U.S. forces near Erbil also were targeted. U.S. space-based and other intelligence gave early warning to the attack, which did not kill any U.S. or Iraqi forces.

“Today John Leachman, Adam Darrow, and Samuel Levander join in the pantheon of Air Force heroes,” 19th Air Force Commander Maj. Gen. Craig D. Wills said at the ceremony, according to a release. “Their names [are] forever associated with courage and bravery, mission accomplishment, and excellence. They follow in the footsteps of the thousands of Airmen who have gone before in the service of our nation and fought so we can enjoy freedoms and prosperity that most Americans take for granted. Most importantly so that we, our people and our allies, can live in peace.”

On Jan. 7, Darrow and Levander were deployed as part of the 7th Expeditionary Special Operations Squadron, Special Operations Command-Central when they received a notice to evacuate because of an “imminent theater ballistic missile threat.” The Airmen prepared for a three-ship of aircraft to evacuate 194 special operations forces, and within about 90 minutes of the initial notification they had flown 132 personnel out of the threat area. To conduct the ordered evacuations, the Airmen filled their Osprey to the aircraft’s maximum gross weight limit.

However, Iraqi forces prevented a runway landing, so the Ospreys flew a minimum separation, maximum gross weight formation to rolling landings at a parallel taxiway. When the aircraft returned to the threatened location, they loaded another 62 special operators on board but had to divert to a third location because of a blocked refueling point and a “critical fuel state,” the award citation states. While at the third location, the crews came under missile attack.

“Ensuring his aircraft was safe to continue, despite several flight control malfunctions and an ill crewmember, he flew with the formation to a desert landing site to link up with other contingency forces and executed a zero illumination, low visibility landing in close proximity to 18 other aircraft, 19 hours into a standard 12-hour crew duty day,” Darrow’s citation reads.

Lastly, Darrow and Levander infiltrated special operations forces as part of a 13-aircraft dissimilar formation assault force to reoccupy the attacked base, ultimately ending the flights 24 hours after his crew day began.

Leachman distinguished himself by meritorious achievement during an operation “in support of a Presidentially-directed combat mission,” his award citation states. He led a deployment of Ospreys from RAF Mildenhall, England, to al-Asad, departing within 24 hours of notification. He was tasked with integrating with 15 other aircraft, including fixed-wing and rotary-wing close air support aircraft, rotary-wing assault aircraft, special operations mobility aircraft, and both manned and unmanned intelligence, surveillance, and reconnaissance aircraft, the citation states.

On Jan. 7, while preparing for rehearsal missions, he was alerted to evacuate al-Asad because of the missile threat. He was able to quickly locate all 68 on- and off-duty personnel, loading them on an Osprey within 90 minutes of the notification.

Eighteen days after the attack, Leachman’s unit was specifically requested to carry a fallen service member from the Syrian border through poor weather, long distance, and in a high-threat environment, the award citation states.

“Through his leadership, multiple other missions were flawlessly accomplished, including Army Special Operations Aviation support for ammunition and refueling equipment, Army Ranger movements, and airlift from the Baghdad Embassy helipad for key personnel,” the citation states.