Skip to content
An F-15E and Airmen from the 492nd Fighter Squadron depart RAF Lakenheath, England, for a CENTCOM deployment. Photo via U.S. Air Forces in Europe-Air Forces Africa on Twitter.
Expand Photo 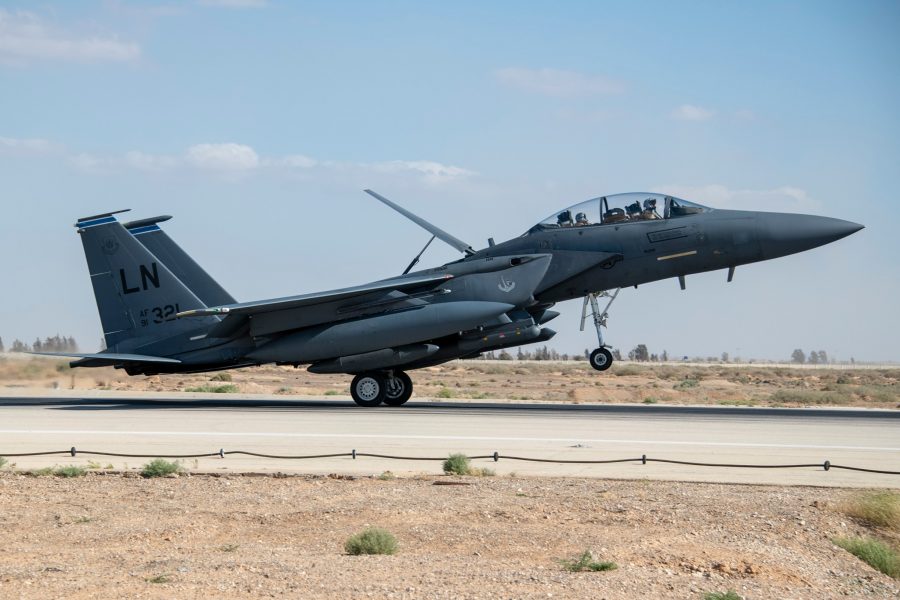 F-15E Strike Eagles and Airmen from RAF Lakenheath’s 492nd Fighter Squadron deployed to the Middle East in early May as part of ongoing combat operations in U.S. Central Command.

The undisclosed number of aircraft and personnel from the squadron, nicknamed the “Bolars,” deployed to the 332nd Air Expeditionary Wing at an undisclosed location, U.S. Air Forces in Europe announced.

“Last week we sent the 492nd Fighter Squadron and Maintenance team downrange to continue the fight,” 48th Fighter Wing boss Col. William Marshall said in a Facebook announcement. “AFCENT asked us to hold [the] announcement until they had an opportunity to make an announcement, which is why you are just now seeing this. Proud of the Bolar team and know they will do great work down there.”

The wing replaces the 389th Fighter Squadron from Mountain Home Air Force Base, Idaho, at the 332nd AEW.

The 492nd Fighter Squadron had to prepare for this deployment while facing restrictions because of the new coronavirus outbreak. Airmen with the squadron told Air Force Magazine last month that they broke up into two teams, alternating on a one-week-on and one-week-off schedule to fly. The squadron conducted all briefings virtually, with planning done remotely, so pilots could arrive shortly before taking off.

“The COVID-19 response has been a significant event for everybody involved,” Marshall said at the time. “Here at the Liberty Wing, our key task has been to balance the protection of our force, along with ensuring that we can continue to provide the combat airpower.”