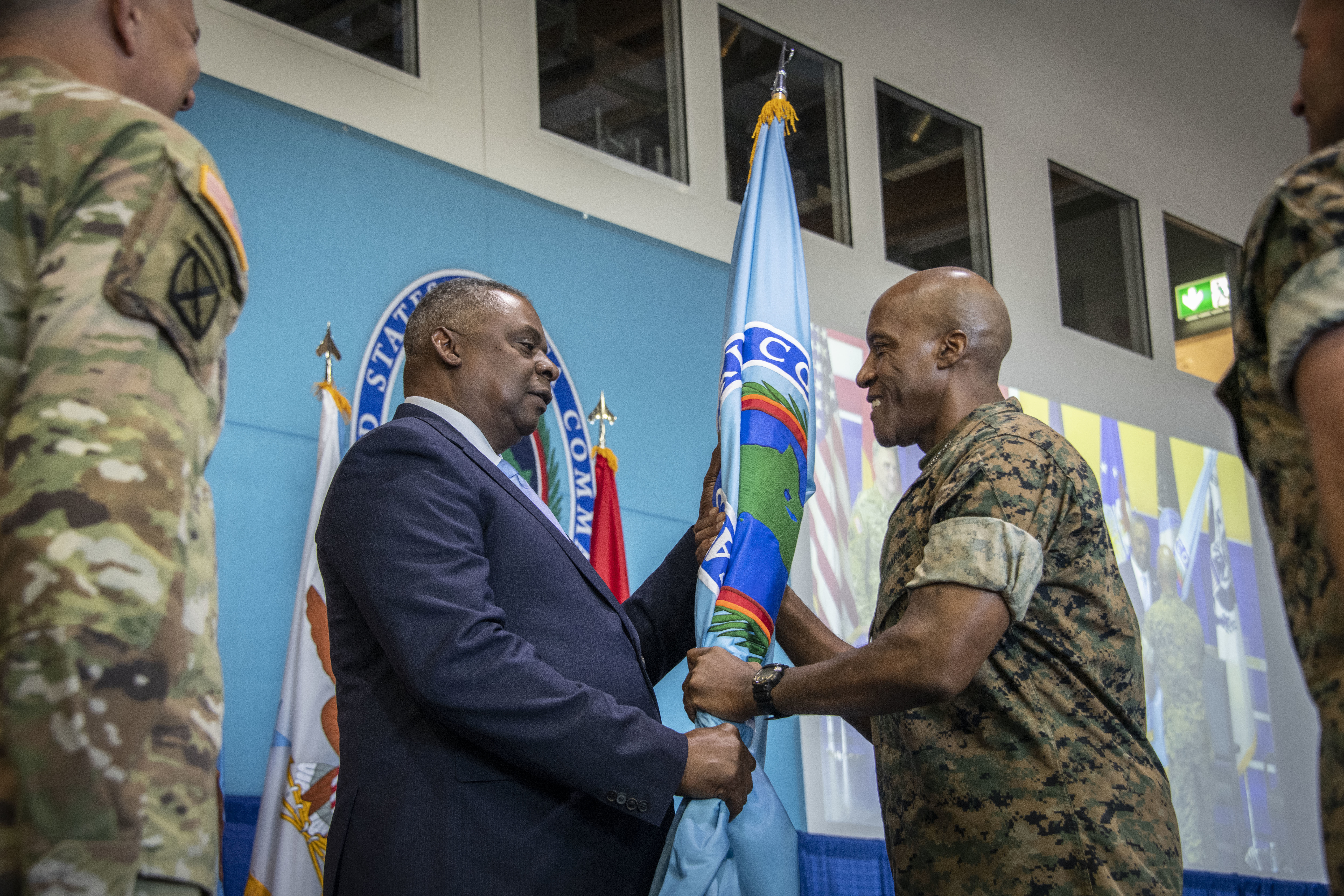 Defense Secretary Lloyd J. Austin III swore in Marine Corps Gen. Michael E. Langley to lead U.S. Africa Command in Stuttgart, Germany, in a change of command ceremony Aug. 9. Langley’s swearing-in comes as governments such as China’s and Russia’s increase their influence in Africa and terrorist groups expand in Somalia and from the Sahel to the littoral states.

“The continent is on the front lines of many of this century’s most pressing threats,” Austin said at the handover ceremony, naming challenges such as terrorism, great power competition, autocracy, mass migration, and food insecurity.

“Violent extremism and instability are also on the rise in the Sahel,” Austin added, citing the expansion of al-Qaida and ISIS.

“Terrorist groups are exploiting weak governance and political turmoil,” Austin said. “These groups have taken thousands of lives, and the havoc that they cause threatens to spill across borders to undermine security in southern Europe and beyond.”

In Somalia, Austin said Langley will face a “more lethal” al-Shabaab terrorist group with its sights set on the U.S. homeland. There, the new AFRICOM commander will oversee the reestablishment of a small U.S. military presence in Somalia to operate intelligence, surveillance, and reconnaissance platforms and help train Somalia’s elite Danab counter-terrorism force.

In his July 21 confirmation hearing, Langley said AFRICOM does not have enough ISR to fight the growing terrorist threat on the continent.

“ISR is an active deterrent. ISR is the commander’s sense to make sense, and it underpins all activities,” Langley told members of the Senate Armed Services Committee. “Al-Shabaab has increased capacity, and that really is the first ranking as far as affecting U.S. interests and U.S. people. So, they have aspirations for external operations, transnational operations.”

The United States has coordinated closely with 5,000 ground troops from France’s Operation Barkhane in the Sahel, which was kicked out of Mali in May after a Russian-backed military coup. The Russian mercenary Wagner Group has since expanded its influence and presence with some 1,000 operators.

On an Africa regional trip, Secretary of State Antony J. Blinken spoke about the recently released White House sub-Saharan strategy, noting that most countries of Africa are democratically aligned with the United States and that they oppose military dictatorships but require stronger defense forces, a principal mission of AFRICOM.

“The United States recognizes that African countries face real security concerns and that countless communities are afflicted by the twin scourges of terrorism and violence. But the answer to those problems is not Wagner—it’s not any other mercenary group,” Blinken said in Pretoria, South Africa, on Aug. 8. “The answer is working to build more effective, accountable African security forces.”

Nonetheless, State Department restrictions on working with military governments prevent the United States from operating with or helping to train soldiers in three of the five Sahel countries that have been integral to containing terrorists in the region.

The Secretary of Defense said America’s adversaries are contributing to the political instability and breakdown of the rules-based order on the continent.

“The People’s Republic of China is expanding its military and economic footprint—and seeking to build bases in Africa and to undermine U.S. relations with African peoples, governments, and militaries,” he said.

China maintains a naval base in the Horn of Africa country of Djibouti, site of the only U.S. base on the continent. China has also aggressively pursued basing agreements that would give it a major military port on the Atlantic coast.

“Meanwhile, Russia is peddling cheap weapons and backing mercenary forces,” Austin said, referring to the presence of Russian proxy soldiers of the Wagner Group in Mali, Libya, and elsewhere.

“That’s yet another reminder of Moscow’s willingness to sow chaos and threaten the rules-based order,” he added. “It goes far beyond Putin’s reckless invasion of Ukraine.”

Departing commander Gen. Stephen S. Townsend warned that Langley will have to face the challenges with a constrained budget.

“At AFRICOM, there’s a new challenge every day, and we don’t have resources to throw at those challenges,” he said. “So, we have to think.”

In recent weeks, Townsend warned that among Russia’s moves have been providing air defenses to the new military government of Mali.

“America cannot afford to ignore Africa,” he concluded. “A few bucks and a few troops can go a long way in Africa, and I think America can afford that.”

“This is history,” Austin said, after previously joking that Langley grew up in an Air Force family and had wanted to become a fighter pilot prior to joining the Army.

“Gen. Langley, as you stand here today, young Marines around the world are watching, and your extraordinary achievement reminds them that they belong,” he said, as Langley appeared to tear up. “It reminds them that the United States military is deeply committed to making progress and to breaking down barriers and to opening its arms wide to all qualified Americans who hear the call to serve their country.”

In his own brief remarks, Langley thanked his father, retired Air Force Master Sgt. Willie C. Langley, who left Active duty after the passing of Langley’s mother to help raise him and three young siblings.

“When I look at my career, I’m an extension of Master Sgt. Willie C. Langley, of his career,” Langley said. “This one’s for you, Dad.”