Skip to content
Reserve Citizen Airmen with the 714th Aircraft Maintenance Squadron, 514th Air Mobility Wing, board a KC-10 Extender with the 514th AMW to deploy overseas on May 26, 2020. Airmen from the 514th AMW deployed to support Air Forces Central Command’s mission to deliver decisive air and space power on behalf of U.S. Central Command for the security and stability of the region. Air Force Reserve photo by Staff Sgt. Sean Evans.
Expand Photo 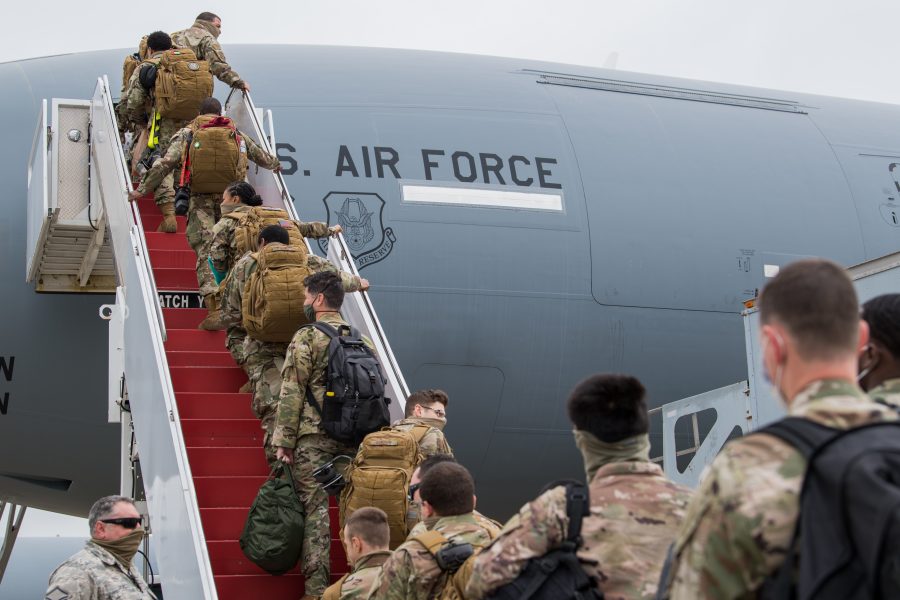 A revamped version of the Air and Space Expeditionary Force model—one that should make presentation of forces more standard and understandable—is a key topic at this week’s Corona meeting of USAF’s top leadership, Chief of Staff Gen. David Goldfein told Air Force Magazine. The meeting, which usually happens at a host base, is being conducted virtually June 1-4.

The AEF model has been overhauled by Gen. Mike Holmes, head of Air Combat Command, and Lt. Gen. Mark Kelly, deputy chief of staff for operations, plans, and requirements, Goldfein said, and they will make a presentation to the assembled USAF leadership for the group’s discussion and possible approval. Service leaders said the plans are “pre-decisional” and after the meeting, more work may follow before the new AEF construct is officially rolled out.

“This is about … force generation,” Goldfein said in an interview. “It’s about … how do we present forces to combatant commanders?” Almost since he came into the Chief’s job, Goldfein said, he has been seeking a better-working construct that is fair to the troops and understandable to COCOMs, their staffs, and Congress.

“This was one of the questions I asked at the beginning,” he noted. “If not AEF, what?”

The new model is the fifth attempt to revise the system during Goldfein’s tenure, he said, and seeks to spread out the duty of overseas deployments as fairly as possible among Airmen, while also recognizing the need for specific capabilities and shortages that require longer dwell-time overseas for some, such as special operators.

“So that work is now complete. It’s taken a while to get it to the point where it’s decision-ready,” Goldfein said. “It’s an Expeditionary Task Force model, but it lays out each echelon of command, how that echelon fits into the larger picture, and how we generate readiness and present those forces in a way that not only they understand, but just as importantly, that we understand, and that we can measure ourselves against when it comes to daily readiness.”

Goldfein said he’s reviewed the new idea and, “I think it’s a really, really good product, and this will be part of the transition to Chief 22.” Gen. C.Q. Brown Jr., commander of Pacific Air Forces, has been nominated to succeed Goldfein.

“Of course, he’s been part of it for the last several years, and so is very familiar, and coming in from PACAF, as our resident expert on all things Indo-Pacific, he’s the perfect guy to be able to take it forward,” Goldfein added.

One of the problems the new AEF seeks to solve is how to present forces so they are measured equally.

“Today, honestly, we’re a bit all over the map,” Goldfein said. “We present global mobility by tail. We present ISR [intelligence, surveillance, reconnaissance] by Cap or line, and we present fighters by squadron. And so, without a common standard for a force presentation model, it’s pretty hard to know and measure against that” in terms of readiness.

Without divulging the plan in whole, Goldfein said it will standardize along the lines of presenting forces by squadron, as “our fundamental fighting formation.”

“We now have a standard which we can be graded against,” and which will also describe the Air Force “state of readiness.” Without a standardized force presentation model, “it’s so easy to mask your risk,” Goldfein said. If “I’m counting tail by tail, and I’m asked for two tails, … well, that’s a hard one to answer, both internally and externally. It’s a lot easier to be able to tell the Joint Staff, the J3, Combatant Commanders, and our Majcoms what their state of readiness is based on impact to squadrons.”

The AEF will also have to align with the flexible basing model the Air Force has been exploring for the last couple of years. Under the new operational deployment model, a spartan force will arrive with its aircraft at an austere location, operate for some period of time, and move again in hours or days to keep adversaries guessing about their location and complicating the enemy’s targeting problem.

The service wants to be able to move 12-24 aircraft to a new location with just one or two C-130s full of people and equipment. Service leaders have talked about falling in on pre-positioned parts and munitions at such locations. They are also planning to train airmen in multiple disciplines in order to reduce the personnel footprint in such movements.

The original AEF—the “space” was added later, but the acronym stayed the same—dates back to the 1990s, when the Air Force was struggling with multiple post-Cold War deployments to hotspots in the Middle East and Europe. Because the same units were being consistently tasked for action, USAF leaders crafted the AEF concept as “buckets of capability” to more evenly distribute the duty, each a roughly-equivalent package of bombers, fighters, ISR, mobility, tanking, and support personnel. The original standard deployment time was 60 days, and that has more than doubled, along with the addition of differently tasked “bands” among high demand/low density capabilities. Taskings have ranged from individuals to portions of squadrons.