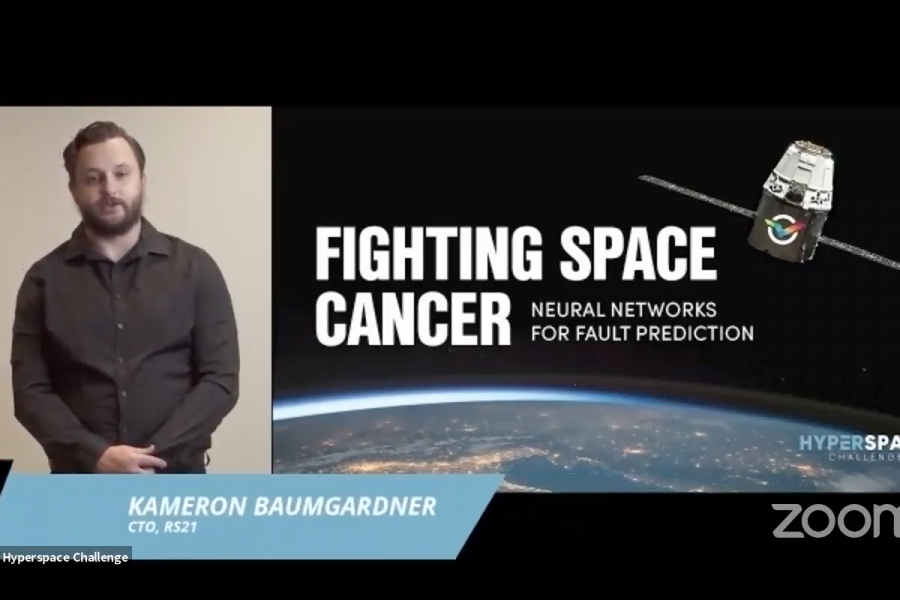 Resilient Solutions 21 took top prize in the Hyperspace Challenge, earning $25,000 for its artificial intelligence-based program that can predict the emergence of faults in satellite hardware and software using techniques originally developed to treat cancer patients.

A digital license plate that identifies spacecraft and an electrically propelled robot drone that can refuel and repair satellites on orbit were among the runners up in the Space Force Accelerator Program‘s latest competition, held Dec. 3.

Eleven start-ups and two university based teams took part in the third annual Hyperspace Challenge—competing for a total of $50,000 in prize money, divided amongst three winners—and the chance to present their solutions to program managers and other potential government customers at a recent demonstration day.

“We’re excited to include universities for the first time this year because it enables us to access innovation that we know is happening in the university systems across the country,” said Gabriel Mounce, who manages the Space Force Accelerator Program for the Air Force Research Laboratory’s Space Vehicles Directorate. Competing technologies were asked to solve four issue areas:

Resilient Solutions 21, an Albuquerque, N.M.-based start-up, is developing a neural network, an artificial intelligence, using techniques called “survival analysis” that were pioneered in precision oncology, Chief Technology Officer Kameron Baumgardner said. “This approach is well suited in an area where population level analytics may perform poorly; individuals are completely unique; and there are many different types of data which need to be evaluated to make an accurate prediction.” These characteristics were all present with satellites, he said. “By treating each satellite as a patient, we will be able to encode all of the data about them, train neural networks, and predict the chance that they’ll have a critical system fault … in the near future.”

The company has been training its AI using NASA telemetry data, but is eager to find new partners who might have additional datasets they could use, Baumgardner said. “These neural networks would need to be trained and built terrestrially. But the final model is a small lightweight application, which could be deployed in order to assist operators in making their decisions, or integrated with autonomous control systems to provide a valuable flag in triggering automated mitigations” for looming critical flaws.

Baumgardner said the AI can be “generalizable,” for instance to digital twin technology, which currently uses software-based models of critical equipment like generators or jet engines to predict when they might break down. “Digital twin capabilities typically rely on computationally intensive physics-based simulations,” he explained, but RS21’s models are “small and lightweight and can make predictions in a much more rapid and resource unintensive manner.“

The runner-up prize and $15,000 went to Starfish Space, a Kent, Wa.-based start-up founded last year by former NASA and Blue Origin engineers. Starfish is piggy-backing its autonomous flight software atop new developments in low-power electric propulsion to develop a relatively low-cost autonomous drone-type vehicle that could be used to repair, refuel, and reposition satellites on orbit.

Co-founder Austin Link said that satellite servicing—so-called rendezvous and proximity operations, or RPO—was predicted to be a $4.5 billion market by 2027. Autonomy and electric propulsion will enable Starfish to scale in that market, Link said.

The Space Object Identification System is “a low cost optical beacon that can be easily affixed to any object launched into space that will be used to positively identify that object and integrate orbital information seamlessly into existing space traffic management systems,” he explained.

Lee said that through their participation in the Hyperspace Challenge, the company had identified a number of “requirements for improved automatic hazard detection and avoidance” from U.S. Space Force, which is charged with ensuring U.S. freedom of action in increasingly crowded orbital space. Currently, “it can take weeks to positively identify a satellite and that’s only going to get worse,” Lee said. More importantly, he added, “timely intent determination is vital. Satellites increasingly operate autonomously and warfighters spend precious time determining whether a satellite maneuvered to avoid a collision, or whether it maneuvered to attack friendly assets, for example.”

The space object identification system has three parts that could help create an ecosystem in orbit that would help warfighters with situational awareness, Lee said:

SDA hopes to test a prototype of its beacon in space next year, and to be on a majority of the 1,100 smallsats expected to be launched in 2025, Lee said.

Space Force accelerators like the Hyperspace Challenge are designed to help start-ups make the difficult transition to selling to U.S. military or civilian government customers, noted Maj. Gen. Kimberly A. Crider, mobilization assistant to the Chief of Space Operations, in a colloquy with Capt. Roger Anderson, deputy director of the Space Force Accelerators program.

Indeed, there is a notorious gap—the so-called “valley of death”—between innovative contract vehicles like the Small Business Innovation Research grants, which several Hyperspace Challenge participants said they were seeking, and the large, long-running programs of record that make up the majority of Defense Department spending. Companies with viable technology can go broke waiting for government contracts, observers say. But Crider said the Space Force was determined to change that.

“We have to conquer the valley of death, that is my charge,” she said.