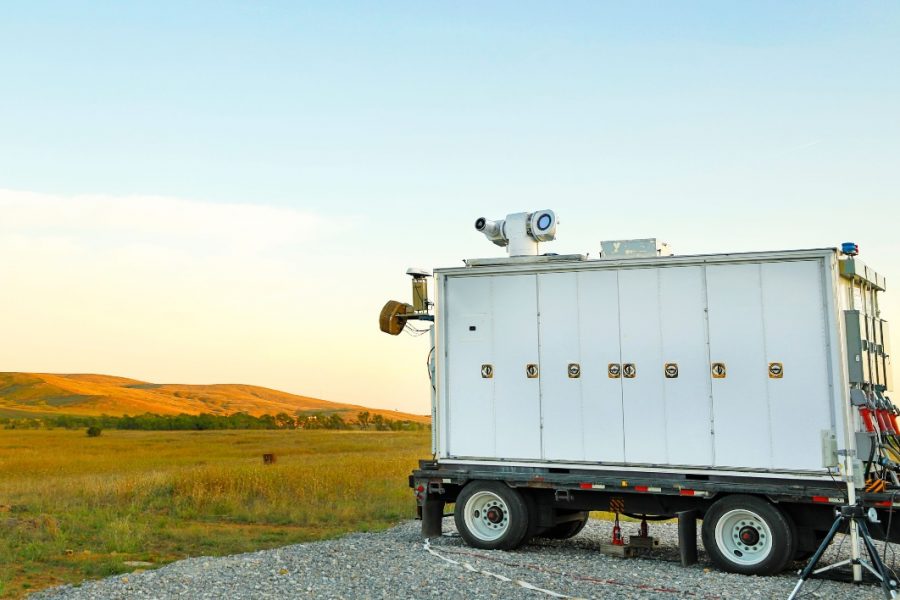 Lockheed Martin for the first time demonstrated a high-energy laser weapon’s ability to take out multiple small drones for the Air Force at the Army-hosted Maneuver and Fires Integrated Experiment last month.

The Advanced Test High Energy Asset, or ATHENA system, shot down multiple fixed-wing and rotary drones during the test, according to a Nov. 7 company release. Lockheed spokesman Mark Lewis said the exact number cannot be made public.

“[ATHENA] operated in a fully netted engagement environment with a government command and control system and radar sensor,” the release said. “The radar track was provided to airmen who operated ATHENA via cues from the C2, then ATHENA’s beam director slewed, acquired, tracked, and defeated the drone with a high-energy laser.”

Lewis told Air Force Magazine that, similar to other anti-drone systems, airmen direct ATHENA using a handheld controller and a single display that shows its engagement with a drone. One airman can take on the threatening unmanned aerial vehicle while a second airman handles communication, he said.

The Air Force is vetting laser and microwave weapons that can protect its bases from encroaching UAVs by melting them, frying their electronics, or confusing and redirecting them.

MFIX is hosted at Fort Sill, Okla. Air Force demonstrations took place in October, while the Army portion ran into early November. Lockheed previously showed ATHENA to the Army in 2015 and 2017, according to Lewis.

Lockheed argues ATHENA is cost-effective and can complement the Air Force’s other counter-UAV investments. The service is also interested in Raytheon systems, and other technologies including Dedrone’s tracking and defense package is deployed at Pentagon facilities like F.E. Warren AFB, Wyo.

While Lockheed declined to provide details about ATHENA’s beam output, Lewis said the laser was the most powerful and effective laser system tested at MFIX.

“This demonstration confirms this is very capable for the airbase defense mission,” he said. “The Air Force has strong interest in systems with ATHENA’s demonstrated success.”

The service is focusing its near-term directed-energy funding toward base protection instead of more complex applications like airborne weapons.