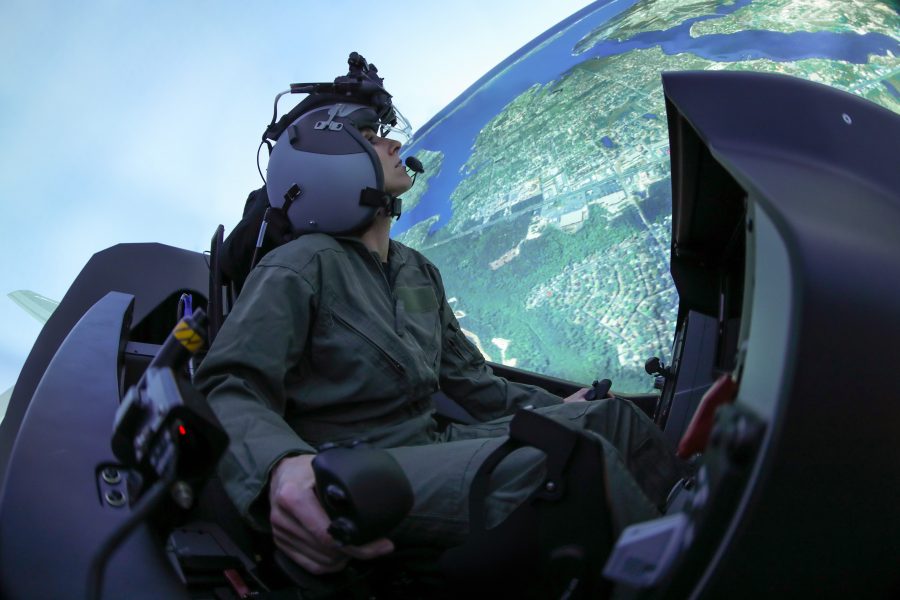 The DMT system connects F-35 full mission simulators over a network to other training systems across the Air Force, from different bases, so they can fly together in large-scale events. F-35s at Nellis connected with other trainers from different bases bases to fly a virtual mission in a simulated contested environment during the June 18 final test.

Chauncey McIntosh, Lockheed’s vice president for training and logistics, said a major challenge in developing the system and making it operational was connecting Air Force training systems for different aircraft that were made by different contractors. While they all spoke the same “language,” connecting them was akin to different dialects coming together requiring “heavy translations” to have them work seamlessly.

The Air Force system will operate at Nellis, but it also can work with mission rehearsal training simulators and deployed simulators. The DMT system is also certified with F-15 trainers.

Lockheed’s next step is delivering the system to the Navy later this year, and to the U.S. Marine Corps in 2021. While the current direction is to have the systems work within services, there is a capability that Air Force, Navy, and Marine Corps simulators could work together if the military decides to pursue that as well, he said. Lockheed is also developing a system for the United Kingdom.

Lockheed intended to deliver the system to USAF in April, but challenges and restrictions related to the COVID-19 pandemic delayed the final test exercise and in turn the acceptance of delivery.

U.S. Special Operations Command has awarded a contract for its Armed Overwatch program, selecting L3 Harris Technologies’ AT-802U Sky Warden as the winner of its competition for a low-cost aircraft to fly surveillance and strikes in austere locations. The deal could be worth up to $3 billion and will include…

The Air Force’s aging E-3 Sentry fleet is on its last legs. The service has already asked in the 2023 budget to retire half the fleet, and its replacement, the E-7 Wedgetail, has been selected. But now, lawmakers and observers are asking a new question: How quickly can the Wedgetail…

Air Force acquisition chief Andrew Hunter sees the need for faster design and development cycles for the service—they just likely won’t happen as quickly as his predecessor pushed for. As part of a panel discussion at Farnborough International Airshow, Hunter laid out his view of an Air Force acquisition and…