Skip to content
More than 300,000 parts from the aerospace industry go into the F-35’s assembly. Here, the jet comes together at the Fort Worth, Texas, Lockheed Martin production facility. Lockheed Martin photo by Alexander H. Groves via Flickr.
Expand Photo 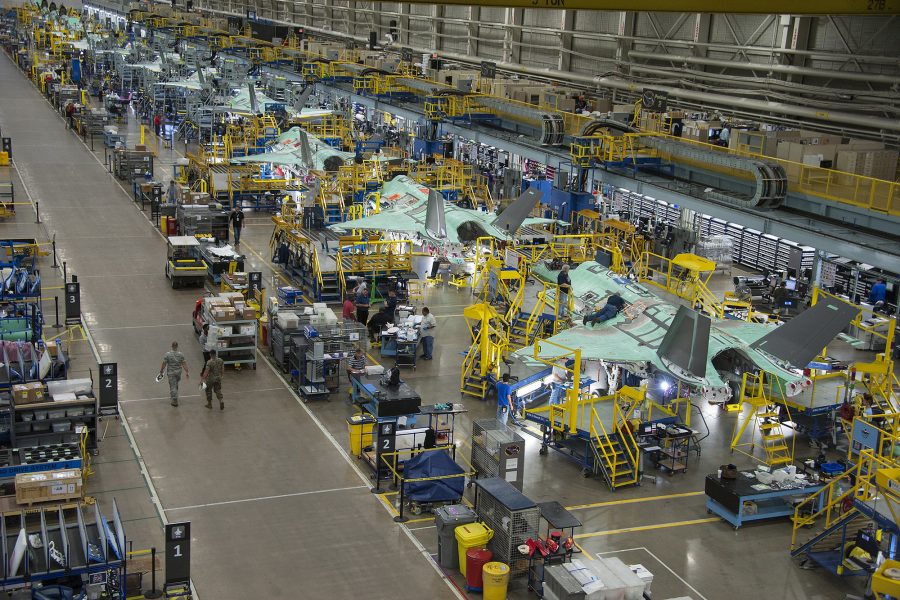 Lockheed Martin Potentially Mixed Up Structural Fasteners in Most F-35s

Hundreds of F-35s could have the wrong fasteners in “critical areas,” according to the Defense Contract Management Agency. But F-35 builder Lockheed Martin says the problem may not need to be fixed.

“All aircraft produced prior to discovery of this [problem] have titanium fasteners incorrectly installed in locations where the design calls for Inconel,” the F-35 Joint Program Office said in an email in response to a query from Air Force Magazine. “Because of this, the engineering safety analysis of the issue has assumed that each critical F-35 joint was assembled with the incorrect fasteners.”

Inconel is an alloy of nickel and chromium, and is supposed to be used in places where greater strength and corrosion resistance are required, while the titanium bolts are used in areas where its strength and lightness helps reduce weight. Titanium, however, has a lower shear strength than Inconel.

Both fasteners are called “eddie bolts” and are similar in appearance except for a number stamped on them. The titanium bolts cost about $5 apiece, while the Inconel parts cost about $20 each. A Lockheed spokeswoman said the two parts are “very difficult to distinguish, visually.”

The Lockheed spokesman said an initial analysis concluded that “titanium has sufficient strength in locations that called for Inconel eddie bolts.” Another Lockheed official said components are built with “twice the strength specified,” but he did not specify whether this was the case with the titanium eddie bolts.

The JPO said analysis as of Jan. 9 concluded “that no aircraft operating restrictions or inspections are necessary at this time.” It added that “the JPO will release a fleet guidance report” at the conclusion of the Root Cause and Corrective Action (RCCA) analysis, now being performed by Lockheed. The DCMA said it and the JPO are supervising Lockheed’s analysis to ensure it is performed without bias.

In addition to the F-35 production line at Ft. Worth, Texas, the commingling of the two types of bolts was also discovered at the Italian F-35 Final Assembly and Check-Out (FACO) facility, but not the one in Japan, the DCMA reported.

Lockheed plans to submit its report to the DCMA and JPO in February, and the company expects it “to be approved,” its spokeswoman said. As to how the issue occurred, she explained that “several fastener bins were found on the factory floor with commingled fasteners at Lockheed Martin locations and several supplier locations.”

Inspections of some aircraft—Lockheed did not specify how many, or who had conducted the inspections—“indicated high levels of compliant fastener installations,” and an engineering review “has been completed and is in review with the customer,” the spokeswoman said.

The company believes that once its analysis is approved, “no rework will be required for aircraft in the fleet,” she said, but did not identify other corrective actions.

Similar quality issues occurred with the F-16, where workers threw leftover fasteners into the wrong bin at the end of a shift. Such problems can often take months to be discovered.

The DCMA acknowledged that Lockheed had begun implementing a corrective plan in November and had “completed most action items in December 2019,” although it did not specify those actions.

It was not disclosed on which F-35 tail numbers the changes were implemented. Lockheed delivered 134 F-35s last year, so it’s likely that the last deliveries of 2019, or about 11-14 airplanes, as well as those delivered in January, are not suspected of having mis-applied bolts.

The DCMA said it hasn’t calculated what it would take, in terms of man-hours, to check all the fasteners on all previous F-35s, or what that would cost, because this was “not part of the corrective action.”

The JPO will work with Lockheed to “examine the structural impacts of having titanium fasteners installed in locations where the design calls for Inconel.” It left open the possibility that there could still be “inspections or replacements…required.”

The company and its suppliers “are validating correct fastener installations and have taken actions to improve fastener segregation and control,” the Lockheed spokeswoman asserted.

The RCCA was to examine “all aspects of handling this part, including, but not limited to, the manufacture, shipping, receiving, production, line distribution and production line work instruction,” the JPO aid in an email. “The F-35 Joint Program Office and Lockheed Martin will use the findings to update these procedures as appropriate to prevent a similar escape from occurring in the future.”

It will be up to the JPO to decide what expense, if any, the bolt mixup will entail, and who will bear it, the DCMA said.

In April of 2019, Lockheed was under scrutiny because of a problem with fastener holes that had either been improperly drilled or not properly treated with anti-corrosion materials. That problem was discovered by USAF maintenance people at Hill AFB, Utah.

A Pentagon official familiar with aerospace structures said it’s possible the titanium or Inconel bolts could be incompatible with the materials they’re attached to, causing a possible corrosion issue if left uncorrected.