Skip to content
Under Secretary of Defense for Acquisition and Sustainment Ellen M. Lord participates in an online Defense News conference from the Pentagon Briefing Room, on Sept. 9, 2020. Defense Department photo by Marvin Lynchard.
Expand Photo 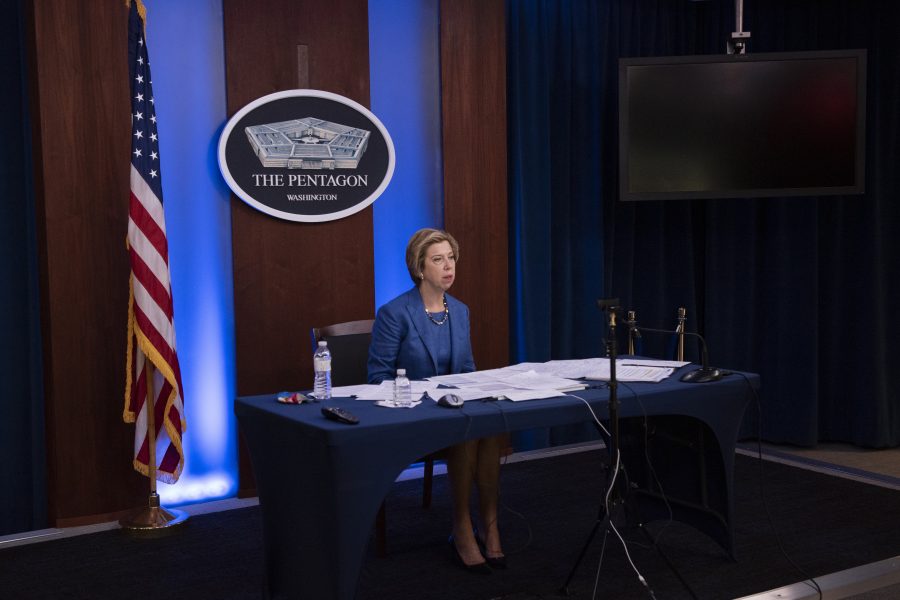 The defense industrial base has yet to feel the full impact of the COVID-19 pandemic, but the Defense Department already is planning to provide as much as $20 billion in assistance to industry.

“I would contend that most of the effects of COVID haven’t yet been seen,” and companies have “absorbed it up to this time,” said Ellen M. Lord, Pentagon acquisition and sustainment chief, in a Defense News online seminar Sept. 9. Companies initially reacted to the pandemic by giving employees time off, “they stretched out production, [and] they paid a lot of people for working 100 percent when perhaps they were only getting 50 percent” output, Lord said.

“Now we get to the point where payments, and incentive fees, and award fees earned” are coming up, and “if we haven’t done the deliveries, that’s where you’re going to see the hit of a delayed response.”

The Pentagon has been collecting data on these effects, and wants to do “a one-time accounting” of expenses incurred from March 15-Sept. 15, Lord said.

Companies will be asked to “send us a proposal, showing us what the impact was, [and] we’ll assess them all at once and then get back” with a response. She expects it will take five or six months to collect the proposals, and match them to DOD’s own data.

While there is an authorization for such aid, it can’t be provided yet because “we don’t have an appropriation.”

The Pentagon wants to make that one-time disbursement and “see where we go from there.” Though the affected period won’t end for another week or so, Lord said she expects the payout will be “somewhere between $10 billion and $20 billion.”

Once the appropriation is made, the Pentagon will send out requests for proposals, and larger companies “will have to flow those RFPs through their supply chain” for reimbursement. She thinks it will take two months to get that data back.

“We want to look at all the proposals at once. It isn’t going to be first-in, first out,” she said. There will have to be a “very data-driven” application of the rules governing “what would be reimbursable and what’s not.”

Lord acknowledged that quarterly reports from defense companies have not been bad so far this year, but “they don’t reflect the hits that were taken.” There have been “mixed reports in terms of revenue and profitability.”

Some Pentagon aid has already been delivered. Lord noted that aviation engine manufacturers were hit hard by commercial aviation “grinding almost to a halt” and said quick Pentagon awards under the Defense Production Act “literally kept them in business.” The Pentagon has “put out almost a billion dollars in DPA Title 3 over the last six months.”

The Pentagon has warned that key domestic suppliers could face extinction, and Lord said the pandemic helped “tell that story” by shining a light on the problem, particularly as it affected small unmanned aerial systems and rare earth element production.

The pandemic also has highlighted the need to move with speed and “peel away all the non-value added bureaucracy,” Lord asserted. A lot of the workarounds created to respond to COVID-19 have been “codified in policy” and are aimed at avoiding “backsliding” to more cumbersome approaches, she said.

Acknowledging an acceleration of mergers and acquisitions during her tenure, Lord said she moved early on to ensure that all affected agencies reported on whether such moves would reduce competition. The Pentagon “worked closely” with the Federal Trade Commission and Department of Justice, and insisted on “divestitures where needed.”

The Pentagon has tried to increase competition by bringing in more small businesses to get a “diverse group” of suppliers, she said.

“We like competition. It is our friend,” she said.