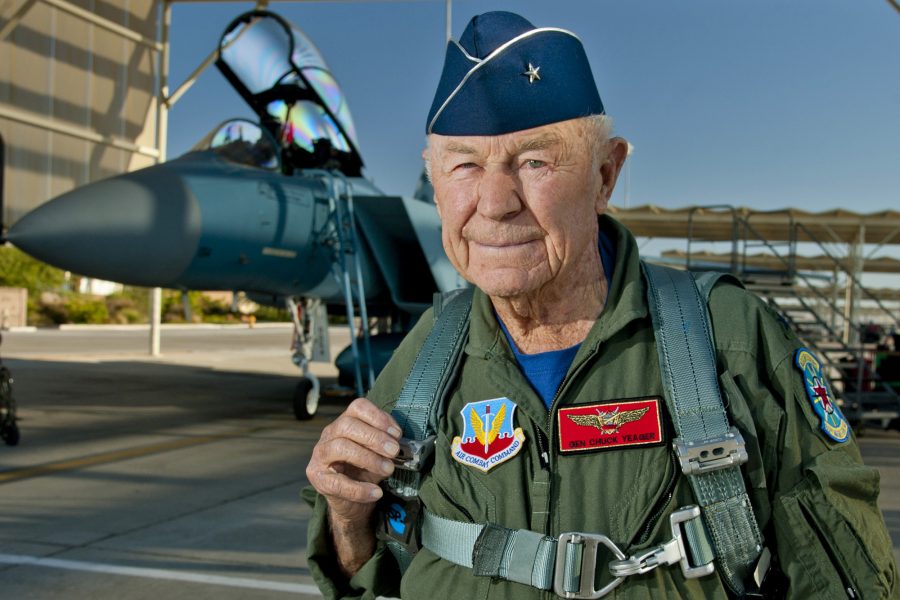 Charles E. “Chuck” Yeager, iconic test pilot, World War II ace, head of the Air Force’s test pilot school, and the first man to fly faster than the speed of sound in level flight, died Dec. 7 at the age of 97.

Air Force Chief of Staff Gen. Charles Q. Brown called Yeager “a leader whose innovative spirit had global impact in aviation and airpower. His legend will continue to inspire generations to push and break barriers.”

Born and raised in West Virginia, Yeager enlisted in the Army in 1941, serving first as an aircraft mechanic. After the Japanese attack on Pearl Harbor, he applied to become a “flying sergeant,” and he flew the P-39 Airacobra after winning his wings. Deployed to Europe in 1943, he was assigned to P-51 Mustangs, and shot down one German fighter before being shot down himself over France on his eighth mission.

Yeager evaded capture with the help of the French resistance, and during his time with them, helped assemble bombs. With the help of the Maquis, he made his way to Spain, making a harrowing passage over the Pyrenees and saving the life of a fellow evader, a B-17 bombardier, for which he later received the Bronze Star. From Spain he returned to England.

Pilots helped by the resistance were barred from flying combat again, out of fear that they would, if shot down and captured, reveal information about the underground network. Yeager appealed personally to Supreme Allied Commander Gen. Dwight D. Eisenhower, only a week after the Normandy landings, to let him return to flying combat, arguing that the Maquis was openly fighting the Germans and the no-fly policy was obsolete. Eisenhower relented, and Yeager went back to combat flying in August 1944.

It proved a good decision. Over the next five months, Yeager racked up an additional 10.5 aerial victories, including five ME-109s in one day and four FW-190s on another. He was also one of the first to shoot down a German Me-262; the first operational jet fighter. During this period he received a commission and was promoted to captain by the end of his tour in Europe. When he left the theater in January 1945, he had racked up 64 combat missions. He attributed much of his success to exceptional vision—better than 20/20, which he said gave him an edge in spotting the enemy first.

His combination of flying skills, maintenance experience, and evader status gave Yeager a choice of assignments, and he picked being a test pilot of repaired aircraft at Wright Field, Ohio. He impressed Col. Albert Boyd, head of the Aeronautical Systems Flight Test Division, who urged Yeager to study mathematics so he could advance as a test pilot. Yeager got tutoring help from other pilots. After graduating from test pilot school, Yeager was assigned to Muroc Army Air Field—now Edwards Air Force Base, Calif.—and over the next two years flew a wide variety of aircraft and tested modifications.

Partly at Boyd’s urging, Yeager was chosen for the Bell X-1 research aircraft program, meant to explore trans-sonic flight. Supersonic flight was an unknown, and an attempt at it had killed British pilot Geoffrey deHavilland in 1946, creating the mystique of a “sound barrier.”

On Oct. 14, 1947—despite having broken two ribs two nights before, in a riding accident—Yeager flew the X-1 to Mach 1.05 at 45,000 feet. He later described the sensation as “poking through Jell-o.” He told National Public Radio in 2011 that the X-1 experience was more a matter of “being in the right place at the right time” than of being an especially gifted pilot.

The feat was kept secret until Aviation Week revealed the event in late 1947 and it was acknowledged by the Air Force in 1948. In that year, Yeager was awarded the Collier and Mackay Trophies for the X-1 flight, and became famous enough to be featured on magazine covers.

Yeager became the Air Force’s “go-to” test pilot. In 1953, he was picked to secretly fly and evaluate a captured North Korean MiG-15 and compare it with the Air Force’s F-86, revealing its strengths and weaknesses in the air battles then taking place. Later that year, Yeager became the first man to exceed Mach 2, flying the Bell X-1A to Mach 2.44 on Dec. 12, besting the record of Scott Crossfield in the Douglas D-558 Skyrocket. Due to inertial roll coupling—a problem never encountered before—the X-1A went out of control at about 80,000 feet, spinning violently in all three axes and causing Yeager’s helmeted head to crack the canopy. After losing 50,000 feet in altitude in under one minute, he regained control at 29,000 feet. The following year, he received the Distinguished Service Medal for the record and the airmanship demonstrated in recovering the aircraft.

Yeager returned to the operational Air Force from 1955 to 1960, commanding at the squadron and wing level, flying F-86Hs in Germany and France and the new F-100 Super Sabre at March Air Force Base, Calif. He lost command of a squadron at Aviano Air Base, Italy, after members of his unit trashed a local bar.

After attending the Air War College, he was assigned in 1962 as commander of the USAF Aerospace Research Pilot School. Although only 39, and having flown nearly every high-performance research aircraft the Air Force produced over the previous 15 years, Yeager was deemed ineligible to be an astronaut because he lacked a college degree. During his time commanding the school, he trained astronaut-bound flyers and himself flew the M2-F1 lifting body, a research forerunner of the Space Shuttle, for NASA.

In December 1963, Yeager attempted to take the NF-104—an F-104 fitted with a rocket booster engine—to 100,000 feet. But the reaction control system, which steered the aircraft in the absence of enough air for control surfaces to be effective, failed around 80,000 feet. The aircraft entered an unrecoverable spin, and he had to eject. Struck in the head by the falling ejection seat’s smoldering rocket booster, Yeager’s face and hands were burned. He avoided permanent damage to his eyes. but lost portions of two fingers. It was his final record-setting attempt.

In 1966, Yeager commanded the 405th Tactical Fighter Wing at Clark Air Base, in the Philippines, frequently doing temporary duty in Vietnam. Flying mostly the B-57 Canberra as a bomber, he accumulated 127 combat missions in that conflict. By 1968, he was the 4th Fighter Wing commander at Seymour Johnson Air Force Base, N.C., flying the F-4. While there, he took his unit to South Korea during the USS Pueblo seizure.

Yeager was promoted to brigadier general in 1969. He served in a diplomatic assignment in Pakistan, was vice commander of 17th Air Force in Germany, and headed the Air Force Inspection and Safety Center from 1973 until his retirement in 1975.

Yeager returned to prominence with the publication of Tom Wolfe’s book, “The Right Stuff,” about the heyday of test flying at Edwards and the Mercury astronaut program, which featured Yeager’s exploits. Wolfe wrote that every pilot imitated Yeager’s West Virginia drawl and unflustered response to a crisis in the cockpit.

The 1983 movie version of “The Right Stuff”—in which he had a cameo role, as a bartender—made Yeager a household name, which he capitalized on with a two-part autobiography, titled “Yeager” and “Press On,” respectively, as well as TV commercial appearances promoting AC Delco car batteries.

He did not rest on his aviation laurels, however. He worked as an aviation consultant and did test flight work for Northrop and Piper into the 1990s. Across his career, he flew more than 350 types of aircraft, amassing more than 18,000 flying hours. In 1986, he served as a member of the Rogers Commission, exploring the factors that led to the Challenger Space Shuttle accident.

To recognize the 50th Anniversary of the Mach 1 flight in 1997, the Air Force flew Yeager in an F-15, going supersonic at Nellis Air Force Base, Nev. There were several more similar anniversary flights, the last in 2012.

Among his many other awards and honors, he received a special non-combat Congressional Medal of Honor in 1976 for his contributions to aerospace science, and was presented the Medal of Freedom by President Ronald Reagan in 1985. In 1966, he was inducted into the International Air and Space Hall of Fame, and in 1973, he was inducted into the National Aviation Hall of Fame. He also is honored by both the California and West Virginia Halls of Fame. Yeager Airport in Charleston, W.Va., is named for him, as well as a bridge in the area on Interstate 64. Senior members of the Civil Air Patrol receive the Charles E. “Chuck” Yeager Award as part of the Aerospace Education Program.

Yeager’s second wife, of 17 years, Victoria Yeager, announced his death over Twitter, citing “an incredible life well-lived” and calling him “America’s greatest pilot, and a legacy of strength, adventure, and patriotism.”