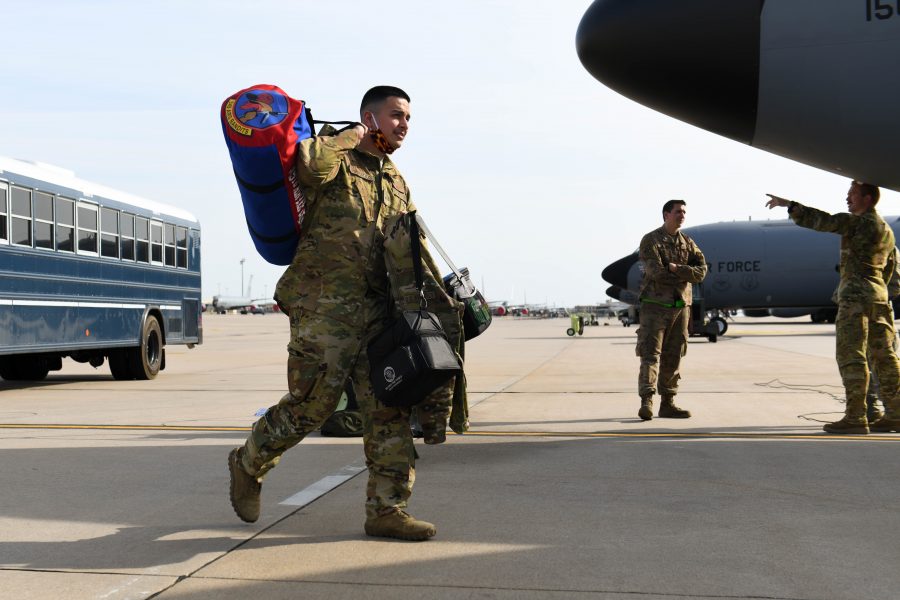 KC-135s and Airmen from the 349th Refueling Squadron at McConnell Air Force Base, Kan., lived in quarantine and dramatically changed their routine before heading to the Middle East earlier this month.

The early April deployment to Al Udeid Air Base, Qatar, is an example of how the Air Force is beginning to operate in what Chief of Staff Gen. David Goldfein calls the “new abnormal.” Although the Air Force has detailed how aircrews are protecting themselves from virus exposure while flying regular missions, the McConnell process is one of the first looks at how a squadron is deploying amid the outbreak.

“Often, times of crisis allow people an opportunity to step up,” the squadron’s commander, Lt. Col. Daniel Schone, said in a release. “And that’s exactly what we’ve seen from the 349th and the supporting agencies from across the base.”

For two weeks before the deployment, the squadron transitioned to minimal manning, sending deploying personnel to quarantine to protect them from COVID-19. Airmen used web conferencing instead of meetings to prepare for the long flight to Al Udeid, according to an April 22 release.

In the days before leaving, Airmen limited interactions by loading the aircraft in advance, sending needed documentation to the Airmen instead of being handed over in person, and doing preflight checks on KC-135s the day before leaving.

Airmen then reported directly to their aircraft, all wearing masks, and took off for the 16-hour flight.

“It’s obviously a different dynamic than what we’re used to,” said Senior Master Sgt. Aaron Tessmann, 349th ARS squadron superintendent, in the McConnell release. “But all the work that has been put in has made it incredibly easy for us to get out the door.”

Pentagon spokesman Jonathan Hoffman, in an April 24 briefing, said steps like quarantining crews before deployment, especially those who live in close quarters such as on Navy vessels, will “continue a little while” into the future and become a normal way of how the military operates.