Skip to content
U.S. Sailors raise a larne target to the fantail of the aircraft carrier USS Theodore Roosevelt (CVN 71) on March 21, 2020. The carrier is being sent back to dock in Guam, and every sailor aboard will be tested for COVID-19. Navy photo by Mass Communication Specialist 3rd Class Dartanon D. Delagarza.
Expand Photo 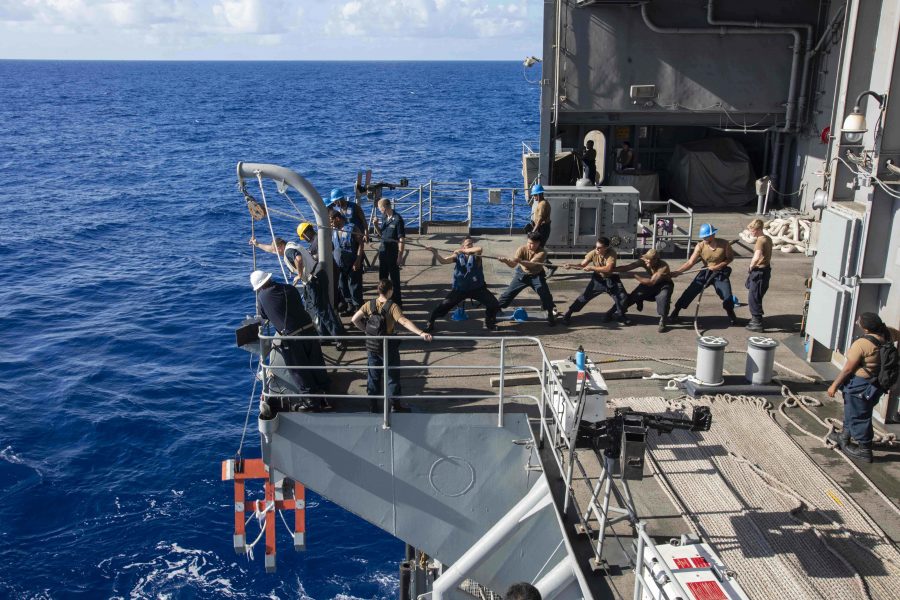 The new coronavirus is starting to have operational impacts in the Indo-Pacific, as the Navy sidelines a carrier that was previously underway.

Air Force Secretary Barbara Barrett, in a video to Airmen released March 26, said the outbreak is “a challenge we have not faced before,” and though the coming weeks “will test us,” the services will lead through the crisis. The Air Force is responding in several ways, including flying aid to Italy and evacuating U.S. citizens from Honduras, and the Air National Guard is activating across the country.

“What you are doing goes beyond the core mission of the Air Force and the Space Force, and I thank you,” Barrett said. “Wherever you are working today, you plan an important role in keeping jets flying, satellites operating, and our nuclear forces ready.”

The U.S. Navy is sending the USS Theodore Roosevelt to dock in Guam because of an outbreak, with at least 23 sailors testing positive for the virus. The carrier has 5,000 crew members, and the Navy will test every sailor aboard, Acting Navy Secretary Thomas Modly said.

“We found several more cases onboard the ship,” Modly said, according to USNI News. “We are in the process now of testing 100 percent of the crew of that ship to ensure that we are able to contain whatever spread might have occurred there on the ship. But I also want to emphasize that the ship is operationally capable to do its mission if required to do so.”

As the virus spreads, the military will begin releasing fewer details of its impact. Defense Secretary Mark Esper told Reuters DOD will only give out “aggregated numbers,” without specific breakdowns by location, because of concerns about operational security.

“We’re not going to disaggregate numbers because it could reveal information about where we may be affected at a higher rate than maybe some other places,” Esper told the news agency.

To help treat the spreading disease, the Uniformed Services University of the Health Services will graduate more than 200 medical students and nursing students early, so they can go into the military health system. The students, who are Active Duty uniformed officers in the Air Force, Army, Navy, or Public Health Service, include physicians, family, mental health, women’s health nurse practitioners, clinical nurse specialists, and certified registered nurse anesthetists, according to a release.