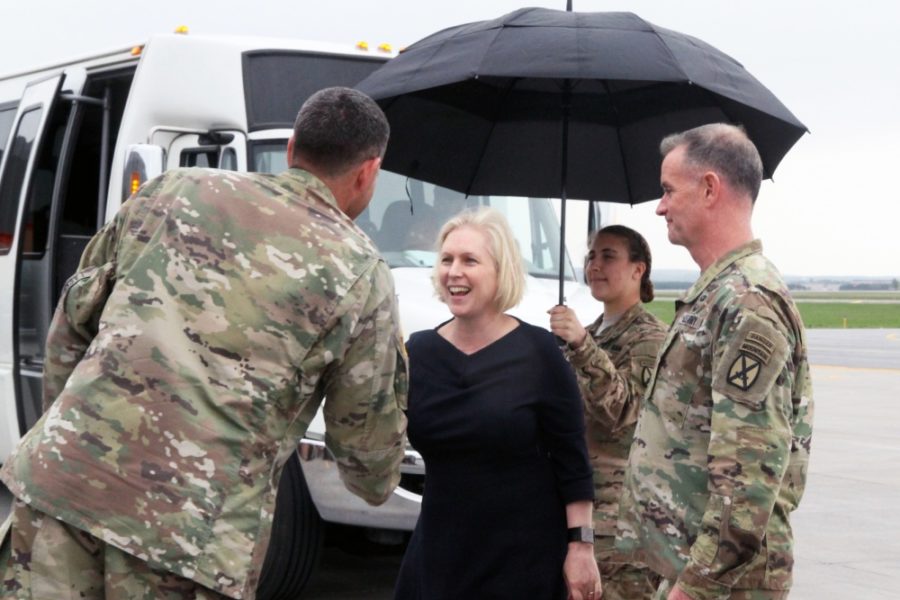 The Senate Armed Services personnel subcommittee voted July 20 to include New York Democrat Kirsten Gillibrand’s bill to remove prosecution of serious crimes from the military chain of command in its markup of the 2022 National Defense Authorization Act, setting up a debate in the full committee over just how far reforms of the military justice system will go.

Gillibrand’s bill, which would have a military attorney from a Judge Advocate General’s Corps review completed investigations for serious crimes, then decide if the case should go to court instead of to base commanders, has attracted broad bipartisan support, with 66 co-sponsors from both sides of the political aisle.

But while much of the focus on the bill has been on how it would combat sexual assault and harassment in the military, it would also change how prosecutorial decisions are made with regard to a range of other felonies not related to sex crimes, including murder, robbery, kidnapping, and bribery, among others.

That would go further than the military justice reforms proposed by Defense Secretary Lloyd J. Austin III, which focus more narrowly on taking decisions about crimes related to sexual assault out of the chain of command.

Senate Armed Services Committee chairman Sen. Jack Reed (D-R.I.) included Austin’s reforms in his chairman’s markup of the 2022 NDAA under general provisions, but Gillibrand, who chairs the personnel subcommittee, said during the July 20 subcommittee markup she was “deeply disappointed” that Reed did not include her more expansive bill in his markup. Reed and Gillibrand have opposed each other on this topic before.

“While I have disagreed strongly and publicly with the chairman on the substance and the merits of this bill, I do recognize that he is the first chairman of this committee to support at least moving sexual assault and related crimes from the chain of command,” Gillibrand said July 20. “That is an important piece of the puzzle, but we must resist the urge to isolate sex crimes and create a separate but unequal system of justice within the military for survivors.”

The personnel subcommittee voted 5-1 to include Gillibrand’s bill as an amendment, garnering support from some of the Senate’s most noted liberal and conservative members, including Massachusetts Democrat Elizabeth Warren to Missouri Republican Josh Hawley.

“I believe that when we have servicemen and women who have had serious crimes committed against them, felony crimes, as are addressed in this bill, it is absolutely imperative that justice is done to these men and women, and that the procedures and standards that they can expect are uniform and are predictable, that trained military prosecutors make the final call as to whether or not this will go forward, these cases will go forward for prosecution,” Hawley said in explaining his support for the broader bill.

The lone dissenting vote came from North Carolina Republican Thom Tillis, the subcommittee’s ranking member and only member that is not a cosponsor to Gillibrand’s bill. In explaining his reasoning, though, Tillis indicated his opposition was due to his belief that the amendment should have been introduced in the full committee markup.

As it is, that full committee markup, now including Gillibrand’s amendment, will come July 21 in a closed session.

During a House Armed Services Committee hearing on the topic, Rep. Ronny Jackson (R-Texas) raised concerns about the impact of removing commanders from the decision to prosecute. Jackson, a former Navy rear admiral, said “it is important that a commander is engaged in all aspects of his or her unit so that he or she has the entire picture when making decisions.”

Taking that responsibility away from commanders “could undermine the foundation of a unit,” he said.

Deputy Defense Secretary Kathleen H. Hicks, in response, said the issue of sexual assault and sexual harassment has proven unique in this regard. Service members have expressed concern about their trust in the chain of command, “and we believe that the price we are paying for that lack of trust is not acceptable.”

Hicks said by adopting the recommendations of the Independent Review Commission, the Pentagon aims to give commanders other tools “so that they are in a stronger position to stay connected.” Removing a leader from the decision to prosecute is a “best-in-class practice in the civilian sector” as well, she said.