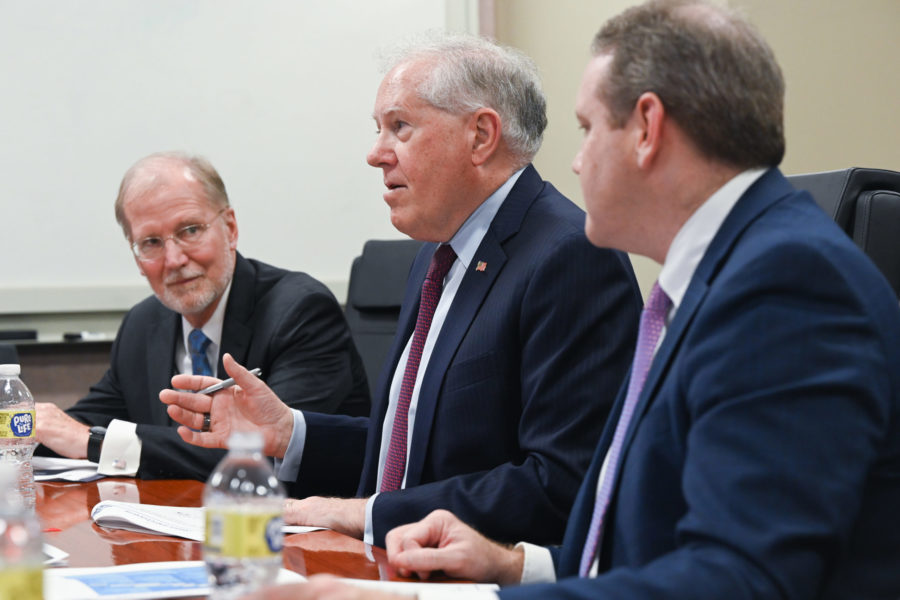 Air Force Secretary Frank Kendall distilled the services’ top fighting priorities into seven “operational imperatives” chiefly as a mechanism to identify the spending transitions needed in the fiscal 2023 budget. But they are likely to persist, and more—on electronic warfare, cyber and munitions–may be added as the Department of the Air Force continues to scrutinize the capabilities it will need to deter or win a fight with a peer competitor, service leaders said at an industry conference.

“I believe that [the operational imperatives] will be enduring,” Air Force acquisition executive Andrew Hunter said at the Life Cycle Industry Days conference in Dayton, Ohio, “because they are focused on operational problems that aren’t going away.”

However, if the DAF changes the “operational designs” of the future force, “that will have impact on the OIs,” Hunter said. Adding more OIs, Hunter later told reporters “is under active consideration.”

The seven OIs are: Space Order of Battle; Operationally-Focused Advanced Battle Management Systems; Moving Target Engagement; Tactical Air Dominance; Resilient Basing; Global Strike and Readiness to Deploy and Fight. USAF leaders list them in order of priority and they have become so intrinsic to service planning in the last few months that they are even referred to by number, such as “OI5.”

“There’s room…for some movement over time, across Administrations and perhaps within Administrations, on how we think through exactly what those operational problems are,” Hunter said in his keynote speech. Some, though—moving target indications in denied areas—will be needed “no matter what kind of operation” is prosecuted.

Being able to operate a B-21 “family of systems” in denied areas, for example, will be an imperative because of the necessity of the deterrence mission, “in any kind of strategy.”

The OIs will be enduring, too because the service combat leaders were heavily involved “in every stage” of creating the OIs: “in their selection, and in the way they were framed.” Operators and acquirers and technologists co-led each OI team, Hunter noted, so the best expertise was called on to develop them.

But “stand by,” he added, because “with the operational success of the imperatives that we have,” more may come up.

Even as the seven were being solidified, “we had three mission area reviews going on: one on the [electronic warfare] portfolio, one on munitions, and a third on cyber, which kind of overlapped on…the other OIs,” as well.

“So, there’s almost no element of the portfolio that isn’t in the game,” he said. “They may not be officially an OI, but we still assume that it’s there.”

The systems now being pursued “are all imperative to winning a fight…over the next decade,” Hunter asserted. “And there will probably be additional OIs that we’ll work on as we go into the [fiscal] ’25 cycle. There’s more to come. But those first seven, I think, were very well chosen.”

The seven OIs were picked not just by Kendall but “as a collaboration” between him, “the Chiefs, the operational community and the acquisition community.” While Hunter named the three he thinks might be added, “it’s got to be a collaborative process” that nominates more.

The push behind the OIs was to “stop waiting,” Thomas Lawhead, assistant deputy chief of staff for strategy, integration and requirements told attendees.

It’s been apparent for several years that the “pacing challenge”—China—has been increasing the “range…lethality…capacity” of their weapons and “most importantly, the ability to achieve their wartime objectives regardless of what we do. That’s the ‘overall imperative,’ if you will, of all the operational imperatives.” It was time to “stop waiting” and face reality, he said.

The OIs are a response to increasing risk, he said. Those risks are to “the ability to maintain our space superiority…being able to gather, mobilize and deploy forces where and when we need to….the ability to generate the number of combat sorties we have to generate to deny their objectives, and we’re increasing risk of getting to and fighting in that highly-contested environment.”

These risks “are unacceptable,” Lawhead said, because without facing and surmounting them…we lose. The reason we do this is to win.”

The OIs all represent “gaps…or deficits” In USAF’s capabilities today, or in the near future, Lawhead said.

He cautioned, though, that “even ‘winning’ is not a good thing,” and described the casualties and “decades” of economic catastrophe stemming from a war over Taiwan, even if the U.S. managed to prevent China “from seizing its objectives” there. The U.S. would lose aircraft carriers and nearby airbases, “and all the people on them,” as well as Army and Marine Corps fighting formations… “and that’s a ‘win,’”

Far better, he said, to convince China at all times to decide “not today,” he said. This, he said “is the sense of urgency Secretary Kendall has given us,” and the thinking behind the OIs.

“Because the force that wins” in that scenario “is also the force that deters,” he said, “and we would like to never have that fight.” The OIs are “aligned” with the Joint warfighting Concept, the National Defense Strategy and the Defense Planning Guidance, he said.

Hunter and Lawhead both said the OIs will be “iterative,” and are aimed at getting capability as fast as possible, enroute to a more assured superiority in the future. Hunter said USAF will accept more risk, both in a technical sense and in the sense that a long reach for a new capability “may end up” costing more. He also said the combatant commanders will also be consulted to see if, after asking for “a 15” of some measure, “and we tell them they can have a 12, is that still worth it to them?…And they nearly always say yes, they’ll take a 12.”

Lawhead said “we’ve tested the future fighting concept [and the] future force design to see if it actually wins” in the Joint Warfighting Construct.

“We found that…when we are able to fight an all-domain fight with our allies and partners, that wins that scenario, of denying our adversaries their objectives,” Lawhead said.

Asked by Air Force Magazine when the next tranche of OIs might emerge, Lawhead said that since the original seven were a “sprint to the 2024 POM” or program objective memoranda, any adds will likely come in the run-up to the next budget.

“That ‘sprint’ nature of the OIs, while focused initially on the ’24 POM, will continue on. We’ve made a downpayment  on the operational imperatives but the…work will continue,” he said. It will be folded into “multiple other capability planning efforts.”

Lawhead noted that since the OIs were drafted, only one significant change has occurred, and that is that “we’re going to take an operational pause” on collaborative aircraft attached to the B-21 family of systems. Kendall has said that on further reflection, developing very-long range unmanned aircraft isn’t a top priority at this time.

Instead, the B-21 focus is on the weapons it will carry, Lawhead said; “what are the right effects we need [from it] and when, and how best to use the B-21.” But the B-21 itself is needed, to be survivable and bring “a volume of fires” to heavily-defended targets.

Industry needs to understand that the OIs are not just a blueprint for the objective force of the future, Lawhead warned.

“We need to be ready tomorrow…We as requirements professionals, you, as industry and acquisition professionals and logisticians,” Lawhead said. “

“We must…build to the best capability we can in the next few years and then continue to work through those capability development plans, those roadmaps, via acquisition strategies and appropriate requirements documentation, to get us to the future force that actually fights and wins.” These will be “spiral developments” of increasing capabilities.

He added that “this is not a one and done. These are living documents, we’ll continue to work on capability development plans.”