Skip to content
Norway’s first F-35, known as AM-1, is lifted by an overhead crane from the Fort Worth, Texas, factory’s EMAS, where its major components were joined together to form the structure of the jet, in April 2015. Lockheed Martin photo via Flickr.
Expand Photo 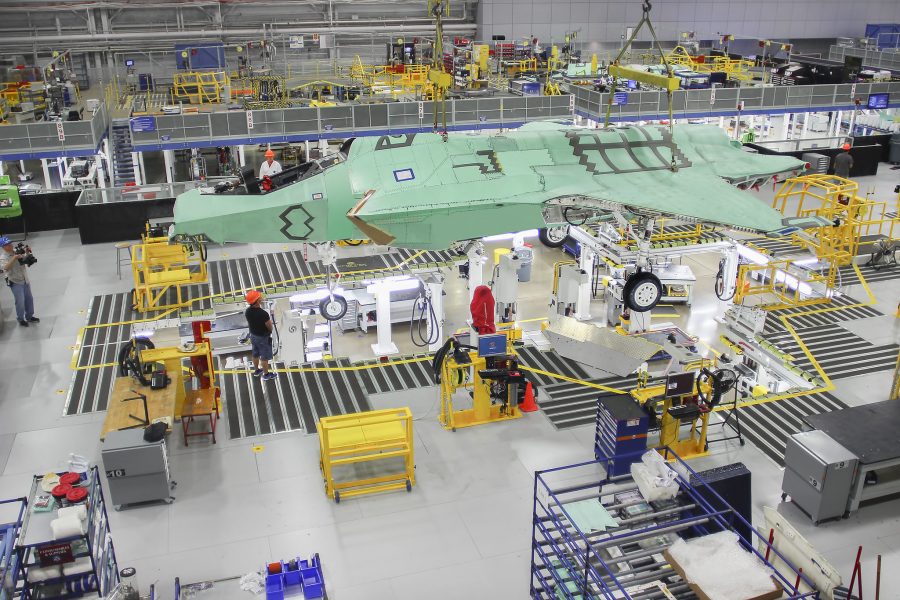 Editor’s Note: This story has been updated with information from a Nov. 13 White House press conference.

Lockheed Martin and Pratt & Whitney have largely re-assigned manufacture of the 850 F-35 fighter parts made by Turkey to themselves and a few other US-based companies, with about 20 percent to be built by overseas partners, company officials said Nov. 13.

In testimony before the House Armed Services readiness subcommittee, Lockheed F-35 Vice President and General Manager Greg Ulmer said the majority of parts made by Turkey—which is being drummed out of the F-35 program over that country’s purchase of the Russian S-400 air defense system—have been “re-sourced … within the US supply chain.” He later said the proportion is about 80 percent, with most of those to be built by Lockheed itself. Another 20 percent will be made by overseas partners who are already “making identical parts.” He did not specify companies or items.

Matthew Bromberg, president of Pratt & Whitney Military Engines, which makes the F135 powerplant for the Lightning II, said a similar proportion of engine parts has been brought back in house at the company, with the rest of the work going to overseas partners.

“We’re not quite there, yet,” Program Executive Officer Lt. Gen. Eric Fick testified. A new source is still being sought for 11 aircraft components and for “one integrated rotor” on the engine, he noted.

Asked how new sources were being chosen, Ulmer said, “We’re constantly looking at, do we have the appropriate supply base, and do we need to seek other sources for other reasons, other than political? It might be financial performance, … poor health of the company, … [or] poor-performing equipment.” Specific to Turkey, “We’re following our normal, … detailed process,…and sharing that information with the program office.”

Ulmer said Turkish companies are “strong performers” that “produce high quality, low-cost” items for the F-35—a comment echoed by Pentagon acquisition and sustainment czar Ellen Lord, testifying at the same hearing—and the only reason to discontinue the relationship is the political situation regarding the S-400. Turkish companies are anxious to continue in the program, he said, and would, if allowed. For now, though, Ulmer said no new contracts will be let to Turkish contractors for F-35 parts, except those needed to prevent delays to deliveries. Turkish companies will deliver parts as contracted through next March, at which point the industrial relationship regarding the F-35 will end, he said.

Commenting on why the Turkish companies are being continued in production into next year, Lord said it’s to ensure “we don’t waste money on [buying] partially built parts.”

Asked if the continuing resolution on the defense spending bill is affecting the F-35 parts supply situation, Lord said it is having no impact relative to Turkey, but “hurts the overall program” by limiting flexibility and schedule.

At a press conference at the White House also on Nov. 13, Turkish President Recep Tayyip Erdogan said his country is open to buying the US Patriot air defense system “under certain circumstances,” but he did not suggest he would abandon the purchase of the Russian S-400. President Trump, at the same press conference, lauded the military trade between the two countries and Turkey’s role in NATO, and said top US and Turkish diplomats are “working on” the S-400 disagreement, but he did not characterize whether he expected a change in the situation during Erdogan’s visit to Washington.

The US and its F-35 partners, as well as NATO leaders, have said that Turkey’s purchase of the S-400 is “incompatible” with that country also operating the F-35. They fear that Russian technicians assisting Turkey with the system could glean some of the F-35’s stealth secrets by observing the interaction of the two systems. Erdogan said last week he is contemplating a buy of the Russian Su-35 if the American F-35 continues to be withheld.