Skip to content
A family reunites on June 1, 2020, at Mountain Home Air Force Base, Ida. The deployment was extended by two months due to COVID-19, resulting in the Airmen being away from home for eight months. Air Force photo by Airman 1st Class Natalie Rubenak.
Expand Photo 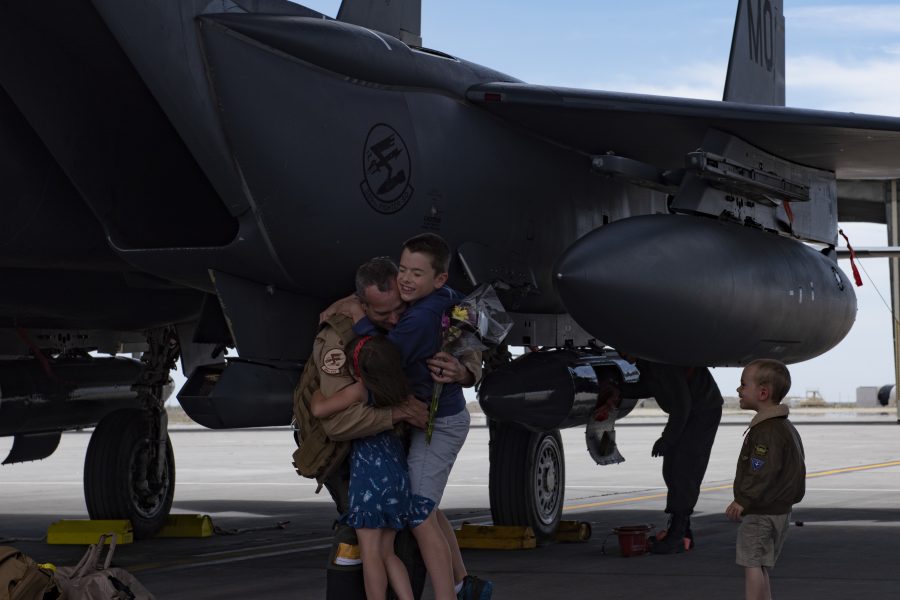 Airmen and F-15Es from the 389th Fighter Squadron at Mountain Home Air Force Base, Idaho, recently returned home from a deployment to the Middle East that was extended by two months because of the coronavirus pandemic.

The squadron was set to return home from an undisclosed location in April, but their travel was delayed by Pentagon movement restrictions enacted to keep troops healthy. The six-month deployment stretched to eight months, according to a Mountain Home release.

“Overall, everyone is in great spirits and very happy to be back with their families,” Lt. Col. Roderick James, the squadron’s commander, said in a June 10 release.

Airmen and their planes returned to Mountain Home earlier in June. They came in through a hangar that was large enough to let people stay six feet apart, per social distancing guidelines. The Air Force also tried to make sure no one carried the virus home.

“We kind of had to go back to the drawing board,” said Capt. Pal Cunada, 366th Logistics Readiness Squadron operations officer. “DOD guidance recently added that public health needed to do actual temperature checks, so they had little scanners on their forehead and some ear scanners.”

The fighter squadron was replaced overseas by the 492nd Fighter Squadron from RAF Lakenheath, England. The Strike Eagles are deployed in support of Operation Inherent Resolve, the ongoing fight against the Islamic State group in Iraq and Syria.