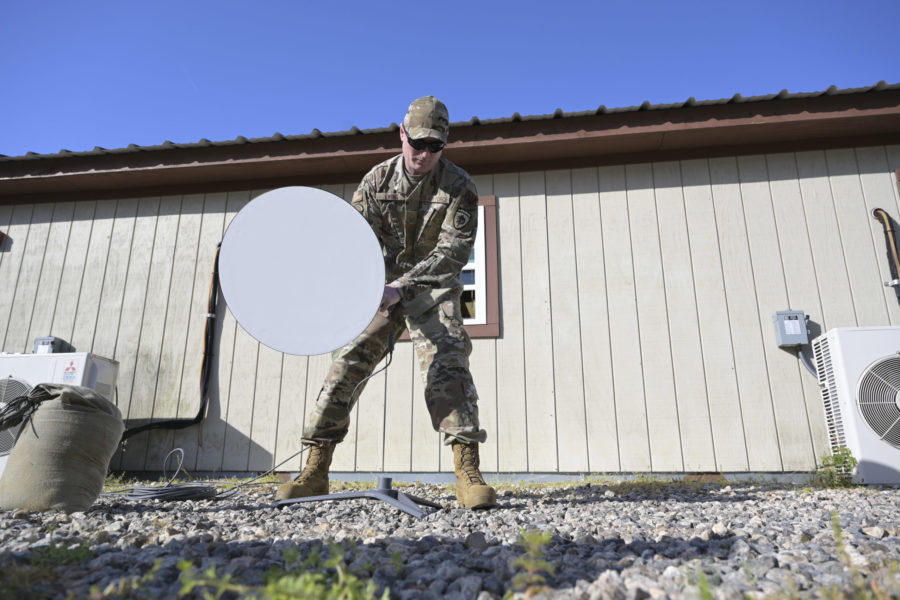 U.S. Air Forces in Europe-Air Forces Africa contracted SpaceX to use Starlink’s services from August 2022 to July 2023, principally for the 86th Airlift Wing, which is the host unit at Ramstein Air Base, Germany, and its tenant units.

The agreement states that SpaceX will “provide either First-Generation or High-Performance satellite terminals and internet service either static/fixed site or portable/mobile to the terminals enabling users to connect devices to the internet,” according to contract documents published Aug. 4. That internet service will provide low-latency connectivity and download speeds of up to 500 megabits per second.

The sole-source contract is worth a little more than $1.9 million and was not contested because “Starlink is the only LEO constellation communications company that currently provides this commercial satellite solution with services to Europe and Africa,” the documents state.

That contract will also cover a 12-month period, with SpaceX providing five Starlink terminals as well as access to Starlink’s internet services, for “operational evaluation.”

The exact unit that will receive the terminals was redacted from the contract documents, but the 1st SOCONS provides contract support for the 1st Special Operations Wing, one of five wings under AFSOC. The 1st SOW operates everything from CV-22 Ospreys to AC-130J gunships to U-28A Dracos.

The estimated cost of the contract was also redacted.

USAFE-AFAFRICA’s and AFSOC’s moves to purchase commercial satellite internet access come as lawmakers and analysts alike have called for the Department of Defense to rely more on commercial space capabilities for things such as communications and intelligence, surveillance, and reconnaissance.

Russia’s invasion of Ukraine has helped to highlight some of the areas where commercial capabilities could be useful. Satellite imagery before and during the conflict have shown Russian troop movements and buildups, and SpaceX has made Starlink available for Ukrainians, allowing the country’s government and civilians to more easily communicate despite the chaotic situation on the ground. Founder Elon Musk has even said the constellation has proven resilient against Russian cyberattacks.

“I would … say that commercial space has been very important in providing capabilities that have been helpful to Ukraine,” Chief of Space Operations Gen. John W. “Jay” Raymond said at the Aspen Security Forum in July.

The impact of Ukraine was even mentioned in USAFE’s Starlink contract documents.

At the same time, DOD, led by the Space Force, is still pursuing sizable low Earth orbit constellations of its own. In particular, the Space Development Agency is planning to launch hundreds of satellites as part of Tranches 0 and 1 of its Transport Layer, though those satellites won’t launch until 2023, rolling out over time into 2024.

Pacific Air Forces only recently developed the concept of agile combat employment in response to the growing threat to its air bases from China’s ballistic missiles, and already ACE is rapidly transforming Air Force planning, training, and doctrine. At its core, ACE is officially “a proactive and reactive operational scheme…