Skip to content
NASA’s Ingenuity Mars Helicopter took this shot, capturing its own shadow, while hovering over the Martian surface on April 19, 2021, during the first instance of powered, controlled flight on another planet. It used its navigation camera, which autonomously tracks the ground during flight. NASA photo.
Expand Photo 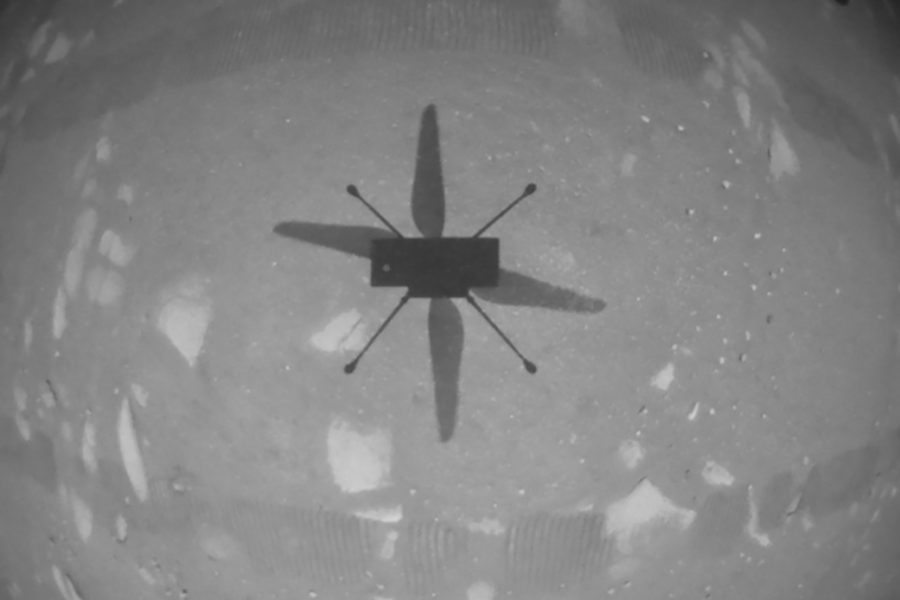 NASA’s “Ingenuity” robotic helicopter made a powered, controlled flight above Mars on April 19, paving the way for further exploration of the red planet—and others—from the air, the space agency announced.

“Altimeter data confirms that Ingenuity has performed its first flight; the first flight of a powered aircraft on another planet,” chief pilot Havard Grip said over NASA’s live feed of the event.

The four-pound, solar-powered helicopter spun up its two, four-foot-long counter-rotating rotors, ascended to 10 feet, hovered for 30 seconds, rotated 96 degrees clockwise, and landed in the course of its 39.1 second flight. Ingenuity imaged its own shadow on the ground below from its maximum altitude.

The event was also recorded by the “Perseverance” rover, which landed on Mars on Feb. 18, carrying the helicopter on its underside. After NASA identified a 33X33-foot flat area for test flight—now dubbed “Wright Brothers Field”—Perseverance released the coaxial aircraft and rolled about 200 feet away, where it will remain during a series of four more increasingly challenging test flights over the next few weeks. After that, the test flights will end and the rover will proceed to its main mission of exploring the area around Jezero Crater, an ancient river delta, which NASA thinks could harbor fossils or other evidence of past life on the planet.

The International Civil Aviation Organization has recognized the operating area with the code JZRO, NASA said. The aircraft’s callsign is IGY-1.

Ingenuity carries a tiny swatch of fabric from the Wright brothers’ original “Flyer,” which flew at Kitty Hawk, N.C., in 1903, to commemorate the connection to the first powered, controlled flight on Earth.

Acting NASA Administrator Steve Jurczyk, at an online press conference, said the event represents one of the rare times that NASA has integrated its aeronautics research arm with its space science arm. The success of Ingenuity will allow the space agency to “see how we can deploy this capability on future missions.”

NASA Mars 2020 team managers speculated that future such aircraft could be used on Mars to investigate interesting areas too treacherous for a lander or rover to go. These include steep crater walls where briny liquid water occasionally flows on the surface, or in one of Mars’ deep canyons, where water vapor forms lingering clouds. They could not say if a flight element will be included on NASA’s next Mars mission, which will focus on soil and rock sample return.

Other applications could be terrestrial planets and moons with an atmosphere, such as Venus, and Saturn’s moon, Titan. Flying on Titan would actually be easier, officials said, because its atmosphere is 50 percent thicker at the surface than Earth’s.

There are also earthbound applications for operating at extreme altitudes, such as at the top of the Himalayas.

“This is not a drone like the ones you can buy, … unbox, and fly,” said Ingenuity chief engineer Bob Balerum. The aircraft has to fly in an atmosphere only one percent as thick as Earth’s—comparable to flying at 90,000 feet on Earth—and tolerate nighttime temperatures plunging to 130 degrees below zero, Fahrenheit.

“This is a very, very special aircraft,” he said, requiring considerable research and development. There was a gentle breeze of 2-3 meters per second during the flight, which the aircraft automatically compensated for, he said. “Early concept design work has started” on future Mars and other-planet aircraft, he said.

“We are thinking of things in the 25-30 kilogram class, … or about 50 pounds,” with a science payload of 10 pounds, Balerum said. Anything larger, he said, and “the packaging of the blades becomes awkward; it might not be feasible in the near term.”

The first flight near local noon was chosen to maximize solar power energy and take advantage of environmental conditions. NASA officials said the drone carries a microphone as well as a camera, and audio may be obtained on the last mission. It won’t be attempted before then because of potential electromagnetic interference with the aircraft’s other systems.

Mimi Aung, Ingenuity project manager, said the next four flights must be accomplished within the next two weeks, as the Ingenuity technology demonstration was allocated 30 days at the front of the Perseverance mission. In two weeks, the rover will press on with its surface journey, taking it farther away from wherever Ingenuity sets down for the last time. However, she said it is possible the drone will fly ahead of the rover.

On the second flight, Ingenuity will fly to five meters height, fly laterally two meters and return to its takeoff point, Aung said. The third flight will again fly to a height of five meters, then laterally 50 meters away, and return to its takeoff point. On the fourth and fifth flights, higher speeds and distances will be attempted. The vehicle navigates with an inertial measurement unit as well as by imagery of the ground, but the latter becomes more difficult at higher speeds. The maximum altitude is also about 50 meters, due to the limitations of the laser rangefinder altimeter Ingenuity uses. She declined to say whether the vehicle was designed to crash-land on its final flight, when the highest speeds will be attempted. Its descent speed was about one meter per second.

The second through fifth flights will be “increasingly difficult … We intend to push it to the limit,” Aung said. This could mean a traveling distance of 600 meters and “as fast as we can go.”

Ingenuity was actually programmed to “fly through” the ground, turning off its motor when it detected an obstacle beneath its spindly legs.

The aircraft’s performance matched perfectly with computer simulations and its handling in an altitude chamber simulating Mars-like conditions. One pleasant surprise was that little dust was kicked up by the drone when it was near the ground.

Asked what the most challenging aspect of the Ingenuity project was, the team answered that it was weight, with one extended argument taking place over a two-gram sensor. Jurczyk said Ingenuity marks another step on NASA’s continuum of expanding its exploratory reach. Early in the space program, NASA was limited to space flybys of the planets, advancing to landers, and then rovers such as the 1996 Sojourner on Mars, followed by increasingly larger and more sophisticated rovers. Ingenuity represents a new step “into the third dimension” of surface exploration