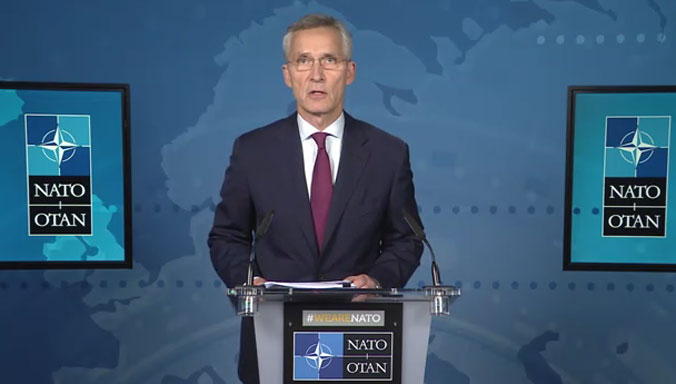 NATO defense ministers on June 17 agreed on three measures aimed at countering Russia’s “extensive and growing arsenal of nuclear-capable missiles” during the first of a two-day meeting held via secure teleconference due to the new coronavirus pandemic, NATO Secretary General Jens Stoltenberg said.

The “balanced package of political and military elements” includes efforts to strengthen the Alliance’s integrated air and missile defense as well as its advanced capabilities, and adapts NATO’s intelligence and exercises, Stoltenberg said.

“A number of allies have announced they are acquiring new air and missile defense systems, including Patriot and [Surface to Air Missile Platform/Terrain] batteries,” and allies also are investing in new platforms such as fifth-generation fighter aircraft, he said.

The announcement follows Russia’s decision last year to deploy SSC-8 missiles. Stoltenberg said the dual-capable, mobile missiles are “hard to detect” and “can reach European cities with little warning time.” They also “lower the threshold for the use of nuclear weapons,” he added, noting the deployment led to the end of the INF Treaty.

In addition, Russia’s hypersonic glide vehicle is now operational, and the country is modernizing its intercontinental ballistic missiles, has tested its air-launched ballistic missile system, and is developing a nuclear-powered cruise missile, he said.

“We have also seen a pattern over many years of irresponsible Russian nuclear rhetoric, aimed at intimidating and threatening NATO allies,” Stoltenberg said. “Russia’s behavior is destabilizing and dangerous.”

NATO’s Nuclear Planning Group also met and determined it will not deploy new land-based nuclear missiles in Europe, though it will maintain the Alliance’s deterrence and defense posture.

“NATO’s nuclear sharing arrangements have served us well for decades. Allowing us to forge common ground on nuclear issues,” Stoltenberg said. “The NATO nuclear deterrent in Europe remains vital for peace and freedom in Europe.”

The defense ministers also called on China, as a rising power, to participate in global arms control, reiterated their commitment to step up efforts in Iraq to ensure the Islamic State group does not return, and said it will adjust its presence in Afghanistan to support the peace process, though the defense leaders also emphasized the need for the Taliban to “live up to their commitments,” Stoltenberg said.