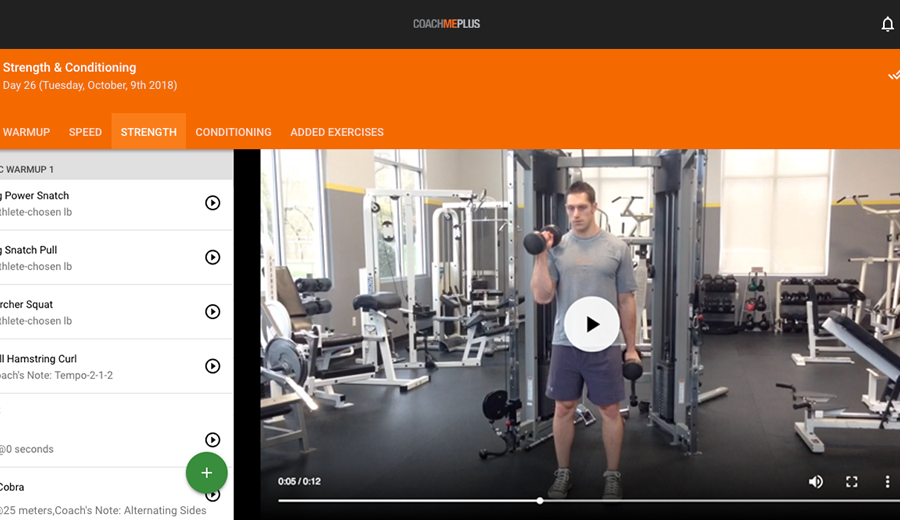 AFWERX is partnering with the makers of a human performance monitoring app known as the Warrior Performance Platform to use remote fitness to create a fitter, less injury-prone, and more lethal Air Force.

Last August, the USAF innovation incubator awarded a Phase II Small Business Innovation Research contract to CoachMePlus and The Informatics Applications Group so the duo could put their Warrior Performance Platform to work for USAF.

As part of this contract, the service undertook a 15-month pilot program to see how the platform, which grew out of a commercial product that was initially meant to enhance conditioning and reduce injuries among professional athletes, could be harnessed to help members of the Air Force’s reserve component be as fit as their Active-duty colleagues and meet evolving fitness standards.

“Our primary users were our Air National Guard air support operations squadrons or tactical air control party,” Capt. Bobby Carbonell, an Air National Guard Innovation Operations Officer and the co-founder of ARCWERX, a new innovation hub for USAF’s reserve component, told Air Force Magazine. “These guys go in on the ground with the Army to control aircraft and have one of the first higher-level fitness test requirements of all the Airmen.”

CoachMePlus President and Co-Founder Kevin Dawidowicz said the Air Force was particularly interested in helping Air National Guard members be in the same kind of shape as their Active-duty counterparts.

“These Airmen … are special forces operators who are the apex and pinnacle of … fitness and readiness. However, with the new fitness standards and new fitness testing that’s become available, the testing is different than they’ve been used to, so now they have a new set of requirements, … and we found that a lot of those Airmen were at risk for failing, or failing, their PT test.”

The platform will help them customize “their fitness experience in a remote setting on their mobile devices” so they can tackle the unique goals keeping them from passing the test.

“When you have a force that’s available, it’s lethal,” he said. “And that’s what we’re looking for.”

The following installations were selected for the Air Force’s Warrior Performance Platform pilot:

With the pilot still underway, CoachMePlus and TIAG announced in March that they were partnering with AFWERX to bring the Warrior Performance Platform to nine Air Force bases. While Dawidowicz did not name those bases, he said they’d come from the pool of pilot selectees.

“One of the biggest challenges and opportunities we face is optimizing the performance of our Airmen, while promoting their readiness and preventing injury,” Carbonell said in a March 2 release about the partnership. “We closely vetted potential technology partners to help us drive a measurable impact on the availability of our Airmen. Whether it’s reducing training injuries or guidance to improve our Airmen’s overall physical fitness, health, and test scores, nothing compared to the WP2 platform’s technology and the overall approach of the CoachMePlus team.”

Carbonell said U.S. Air Forces in Europe, the Air National Guard, and Air Combat Command all have expressed interest in partnering with them for Phase III follow-on contracts.

How the Platform Works

The Warrior Performance Platform, as Dawidowicz explains it, has three focus areas: “workout, distribution, and tracking.”

The platform consolidates the sum of its information about Airman users—such as information from coaches, trainers, and any other member of an organization, as well as biometric data that can be passively gathered from Airmen’s wearable devices—into “dashboards and reports to make it easy for decision makers to create intervention,” he explained.

He says two factors set WP2 apart from other health, nutrition, and fitness apps and tools:

“You know, [with] the health kits of the world and everybody else like that, there isn’t somebody else on the other side of it,” he explained. “You’re kind of … at the whim of the technology, whereas this, it’s a blend of technology and personnel that really kind of round out the experience and provide real guidance based on the information.”

And the COVID-19 pandemic has made USAF commands, Airmen, and dependents express interest in using the platform, Carbonell said.

“Obviously there’s a million ways to get a workout while you’re isolated or quarantined, or even on a day-to-day basis,” he said. “But the fact that the commands see that, ‘Hey, I’ve got my own PT leaders and my own fitness cells, and I can kind of tailor this to the needs of the mission and get it out to people on like a trusted platform?’ That’s a huge value proposition for them.”

While CoachMePlus plays point on the Warrior Performance Platform, its genesis was a team effort between the Buffalo, N.Y.-based outfit and TIAG, Dawidowicz said.

“We can deliver …. the goods when it comes to workouts, and data, and collection of data, and dashboards and, you know, just turning it into basically anything that you need in a use case,” Dawidowicz explained. “When it comes to navigating the complexity of a cybersecure environment, dealing with … telecommunication across secure networks, and the like, we just don’t have that experience. And TIAG has been our partner in this from Day One.”

Lessons Learned from the Pilot

Dawidowicz said he initially envisioned the pilot as a simple, straightforward endeavor in which some Airmen would be paired with an exercise physiologist who’d “do some direct programming,” and the rest of the pilot population following a “generalized education format.”

But the reality wound up being somewhat different.

“What we instead got was a rainbow of like, these different flavors of human performance,” he said. “You’ve got multiple programs that are being run all with their own … different initiatives and goals. You’ve got multiple levels of practitioners using the applications, so you’ve got four different scenarios that kind of played out.”

“All of these have presented a unique challenge and a different approach to the same goal: … improve performance, reduce injury risk, and so on,” Dawidowicz said. “And they’re all trying their own blend of activities to do that. Our ability to manage each of those locations and each of those practitioner styles under one system is really the key to what we feel is going to be successful in this program.”

Dawidowicz said that the flexibility the pilot demanded “has been a great test” of CoachMePlus’ ability to craft “a scalable, force-wide solution” for USAF.

The realization that everyone approaches fitness programming differently was one of the biggest lessons learned from the pilot, so far. Another, he said, was that Airmen weren’t going to show up with identical technology—whether it’s a FitBit, Garmin device, or an Apple Watch.

Since PT testing periods are only “once or twice a year,” Dawidowicz said  it’s too early in the ballgame to tell whether the pilot will result in fitter Airmen. Still, he said, the team has observed “a high level of compliance, which we theorize will turn into improved performance.”

“We’re hoping to see a pretty good jump from their diagnostic Tier 2 to their … for the record Tier 2 test,” Carbonell added.

Editor’s Note: This story was updated on April 24 at 11:06 p.m. EDT to clarify that the partnership announcement came from CoachMePlus and TIAG, not AFWERX.