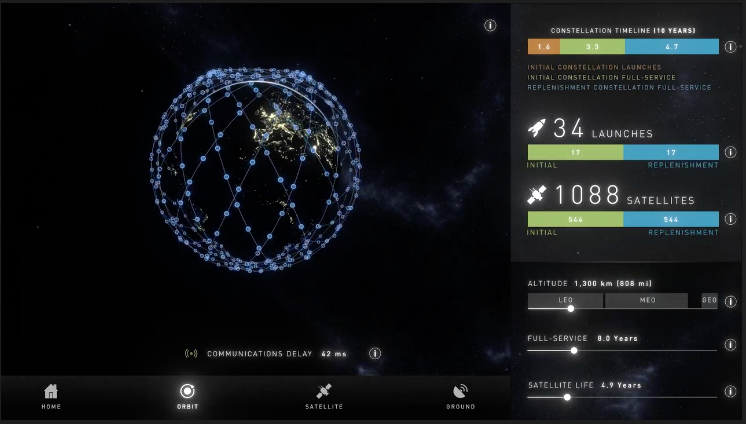 For all those who believe they could do better than Blue Origin boss Jeff Bezos or Space Development Agency chief Derek Tournear at designing communications satellite constellations—there’s now an app for that.

Constellations, a new app for iPhones and iPads, lets users simply and quickly visualize a globe-spanning network of satellites and shows easily how changing one parameter, like the orbital altitude, impacts others, like the number of satellites or ground stations needed.

“We wanted to create something that anyone could use, without any training, to show the way design decisions about constellation architecture impact each other—to show the interconnections and the trade-offs,” he said.

“I mastered it in a couple of minutes,” said Lockheed Martin Space spokesman Chris Pettigrew.

“There are a lot of conversations going on right now about the right architecture to use … in both commercial and military constellations,” explained Daehler. “We wanted a tool that would remove the mystery, … remove the gut instinct and the emotion, and provide scientific engineering data to help people understand the decisions that have to be made.”

Varying these design parameters changes other elements of the constellation visualized by the app, including:

Daehler said the tool could be used by the public, by people in the satellite business without a technical background in orbital engineering, or by others who might need the “big picture” input the app could provide. “Maybe a warfighter, thinking about a new program,” he said.

One satellite systems engineer, an independent contractor who asked for anonymity to speak freely, called the app “extremely high level.”

He said he liked the ease of use of the app, and believed “it has a lot of potential.”

But “It’s certainly not detailed enough to … base any decisions about an actual constellation on,” the engineer said. “There’s an awful lot of detail that goes into these engineering and design decisions,” he added.

“If you need a minimum elevation angle of say 30 percent,” the engineer explained, “that’s going to make a big difference to the number of satellites you need in your constellation.”

“The danger is in the oversimplification,” he concluded.