Skip to content
Shown is a B-21 Raider artist's rendering that highlights the future stealth bomber at Edwards Air Force Base, Calif. Designed to perform long-range conventional and nuclear missions and to operate in tomorrow’s high-end threat environment, the B-21 will be a visible and flexible component of the nuclear triad. Air Force graphic.
Expand Photo 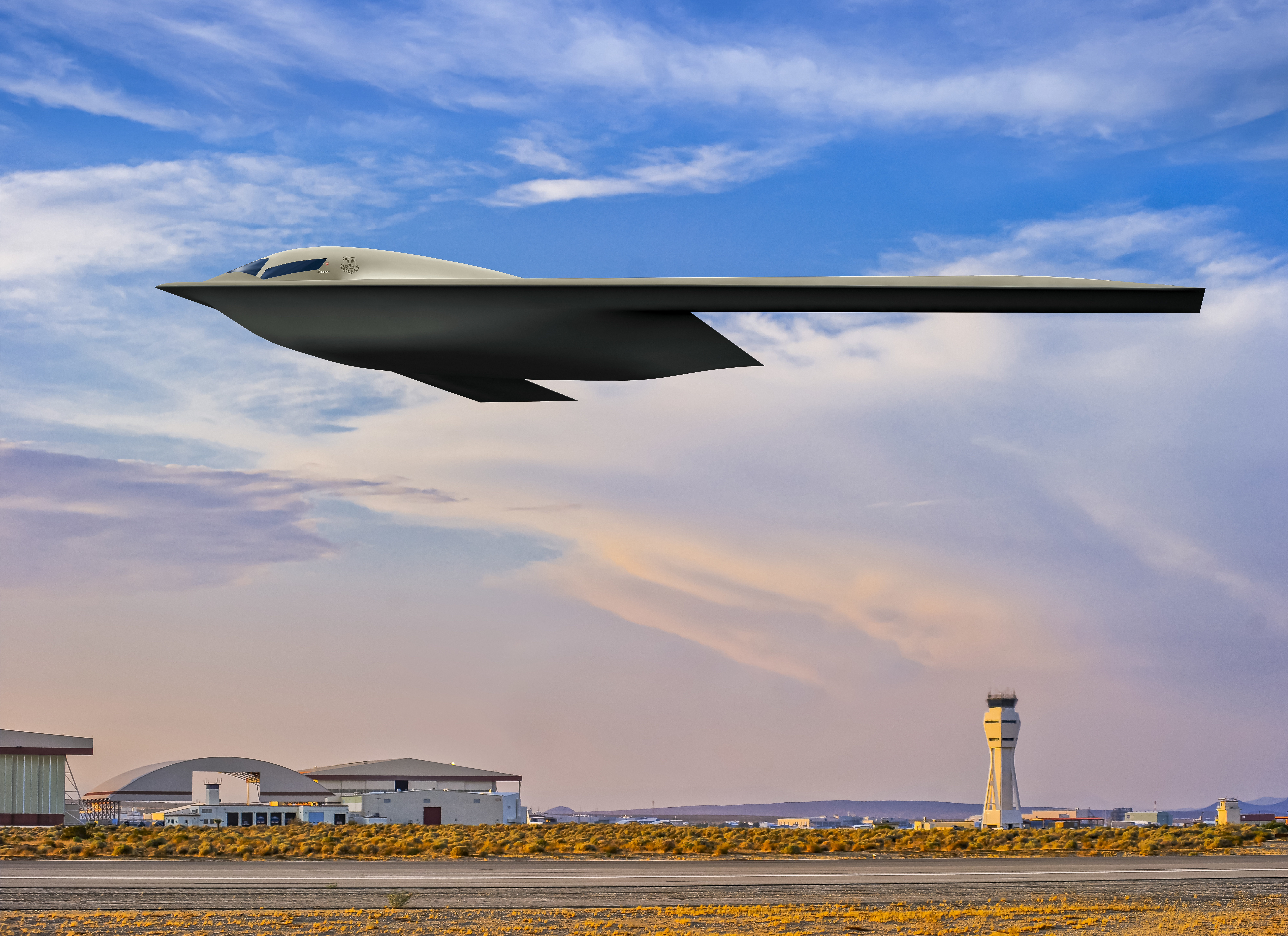 The Air Force’s newest rendering of the secret B-21 bomber shows an exotic layout of cockpit windows. The image, the third released so far, offers a new oblique view of the aircraft from below its port side, showing a deeper keel and wider weapons bay than that of the B-2 bomber it will succeed. But the air intakes, which have been redesigned, are obscured.

The new B-21 Raider image was published July 6 along with a new fact sheet. The Air Force identified it as an “artist’s interpretation.” It shows the aircraft taking off from Edwards Air Force Base, Calif., where it will be flight tested beginning early next year. The prior official illustrations were released in January 2021 and in February 2016.

The new picture shows a triangular, curved main forward cockpit window and a wide, arcing side window with no apparent interior framing. That departs from earlier views which showed B-2-style windows. Just aft of the side window is the Global Strike Command badge and stenciling for ground rescue instructions.

The nose of the aircraft confirms a more pronounced “Beak” or “Hawk’s bill” than on the B-2 Spirit, which the B-21 generally resembles. The underside of the aircraft seems to be deeper than the B-2, although details are obscured. When compared with the artist’s rendering released in January, the B-21 seems to have a greatly pronounced chine, or flattened leading edge, which then tapers into the blended-wing fuselage. This chine also marks a departure from the B-2, which has a more classic wing-like chord shape in cross section.

Northrop’s stealthy YF-23, which lost out to the F-22 in USAF’s Advanced Tactical Fighter competition some 30 years ago, also featured extended chines on the leading edges. The company’s X-47 autonomous carrier aircraft demonstrator featured an extended Hawk’s bill like that on the B-21.

The image obscures details of the B-21’s air intake, which underwent a “major redesign,” according to Program Executive Officer Randall Walden. He told Air Force Magazine early this year such a change is typical for a complex new aircraft program. New aircraft often have “installed engine inlet/exhaust integration issues that have to be resolved,” he said. Previous images have shown the intakes as shallow and straight-edged, unlike the B-2’s scalloped, rounded, and deep intakes.

Also absent from the new image is any detail of the exhaust, although it continues to show a tapered, pointed single tail in silhouette.

The image also suggests a two-tone paint scheme on the aircraft, with lighter gray above and darker gray below. There’s a sharp color break below the window, and the GSC badge is in dark gray, whereas such markings are in light gray on the B-2, to better contrast with that aircraft’s FS 36118 overall “Gunship Gray” paint scheme.

The January 2016 image also revealed that the B-21 rests on two two-wheel main landing gear, while the larger B-2 has four-wheel bogeys on each side. The new image suggests a thickening of the outer wing as well.

The new fact sheet released with the image mentions major program milestones and emphasizes the jet’s open-mission systems concept, which will make upgrades easier and quicker to incorporate. It does not provide any details on performance or dimensions but notes that the first B-21 operating base will be at Ellsworth Air Force Base, S.D.

The fact sheet also mentions that the B-21 is part of the “larger family of systems” for conducting conventional long-range strike. This family includes “intelligence, surveillance and reconnaissance, electronic attack, communication and other capabilities,” the Air Force said. The fact sheet confirmed that the B-21 will be nuclear capable and is “designed to accommodate manned or unmanned operations … It will be able to employ a broad mix of stand-off and direct-attack munitions.”

The B-21’s name “Raider” honors the Doolittle Raiders who conducted the first bombing of Japan of World War II in retaliation for that country’s attack on Pearl Harbor, Hawaii. The April 1942 strike was carried out by B-25 Mitchell bombers flown off the aircraft carrier USS Hornet. The designation “B-21” refers to the first Air Force bomber of the 21st century.

The average procurement unit cost of the new bomber is $550 million in base year 2010 dollars; inflated to 2019, the cost is $639 million each, the fact sheet said.