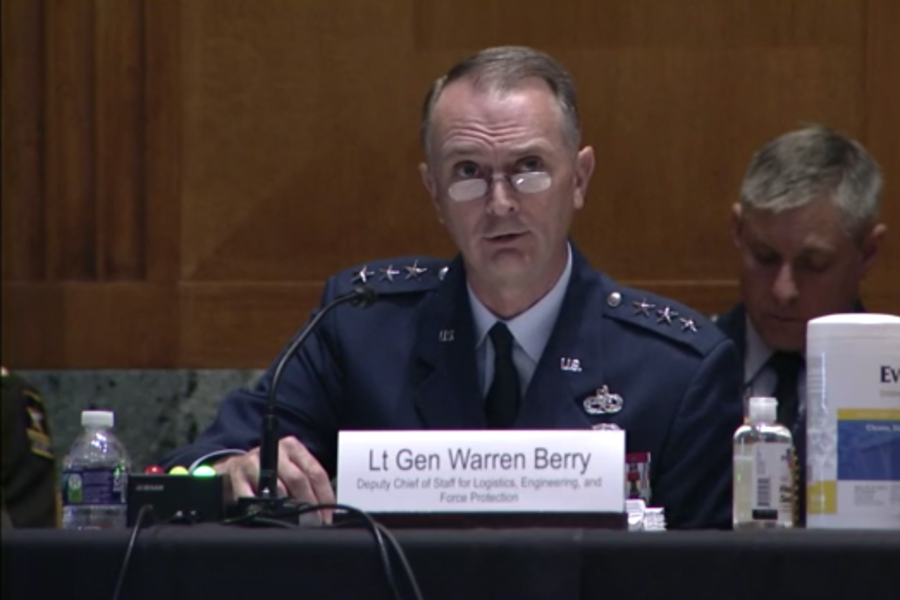 “GBSD, where you’re essentially going to replace a silo a week for eight years, is going to be a very complicated endeavor … so we’re very grateful for the authorities we’ve gotten from Congress,” said Berry, the deputy chief of staff for logistics, engineering, and force protection. “And I think those authorities that we have received have at least set us on the path to realizing the goal of staying on cost and on budget for the GBSD transition.”

But while GBSD remains on track and well funded in the budget, Berry was also pressed by Sen. John Hoeven (R-N.D.) about the lack of MILCON funding for a new Weapons Generation Facility at Minot Air Force Base in North Dakota that would accommodate both the base’s B-52 bombers and its land-based nuclear weapons.

“This is the only dual nuclear base in the country operating in an older facility, so it seems to me it’s of great importance. Can you tell me the timeline there?” Hoeven asked.

Berry said he could not offer a specific date for when that construction might begin but did note the challenges presented in trying to build a facility for both bombers and missiles.

“It is very, very complicated. The WGFs themselves are complicated and complex facilities, when you design in all of the safety and security standards that come with that weapons system,” Berry said.

Also at Minot, more than $70 million was appropriated across 2019 and 2020 for a consolidated helicopter facility to house, repair, and operate the new MH-139A Grey Wolf helicopter, which will replace the aging UH-1Ns used for security at the Air Force’s nuclear missile fields.

But while the MH-139A itself has been delayed by issues with FAA certification, there has also been no construction for the Minot facility despite Hoeven saying he was “expecting that y’all would have had a groundbreaking by now.”

The delay is due to higher-than-expected bids from constructors, and the service is looking for ways to reduce costs, Berry said. When a contract finally is awarded, it will take roughly two years to complete the facility, he added.

Sen. Jon Tester (D-Mont.) also questioned Berry on the status of construction for a new Weapons Storage and Maintenance Facility at Malmstrom Air Force Base in his state. About $235 million was authorized for the project in fiscal 2020.