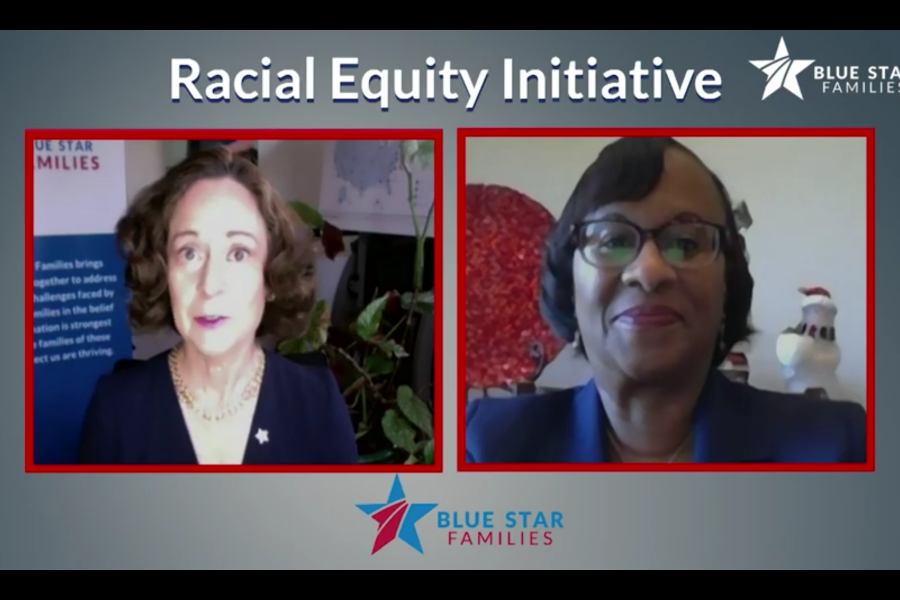 The nonprofit Blue Star Families recently debuted a million-dollar Racial Equity Initiative to diversify the military- and veteran-service organization communities and ensure that military families of color feel connected, included, and as though they belong.

“Through five impact areas—research and advocacy, training, leadership, collaboration, and community impact—the initiative will gather new resources and focus the energy of Blue Star Families and a broad assembly of corporate, foundation, and non-profit partners,” according to the initiative’s homepage.

The initiative was born out of the nationwide civil unrest that followed George Floyd’s Memorial Day killing in police custody, Blue Star Families CEO and Board President Kathy Roth-Douquet said during a Dec. 16 interview with Air Force Magazine.

“The U.S. military was activated or threatened to be activated both in a way that we saw was making our community very uncomfortable,” she recalled. “And [at] Blue Star Families, we lean heavy on data … so we did a pulse poll right away to see how our families were feeling both about the use of the military in, you know, ostensibly [the] civil unrest situation, but also how they were feeling, what their emotions were.”

That survey revealed that the BSF community was simultaneously experiencing a variety of “strong feelings,” including fear, worry, and hope, she said. It echoed a much broader survey conducted by the Air Force Inspector General’s office, which released a 150-page report on Dec. 21 citing widespread racial disparities within the Department of the Air Force.

“We also saw a lot of concern about use of … Active-duty forces,” she said. Although the concern was “universal” it “was a lot higher among military families of color,” she added.

While the organization hadn’t really historically examined its survey responses by race, this finding—paired with racial disparities it observed in subsequent “pulse polls”—served as a wake-up call.

“We realized that there is an opportunity for us to do much more work around the issues that are key to our mission, which are, ‘do military families experience that sense of belonging that one needs in order to thrive in order to … give us the strongest military that we need in our country?’” she said. “And it’s not hard to see that there is work to be done. And if not us, who? If not now, when?”

To get after this goal of increasing inclusion, Blue Star Families assembled an expert Racial Equity Committee co-chaired by retired Army Lt. Gen. Gwen Bingham, a Black former Army assistant chief of staff for installation management, and Ingrid Herrera-Yee, a clinical psychology health expert with Booz Allen Hamilton who is also a military spouse and a first-generation Latina-American.

While the initiative formally kicked off in mid-December, the committee has been meeting and brainstorming for months already, Roth-Douquet said.

Former Air Force Association President, former USAF Vice Chief of Staff, and retired Gen. Larry O. Spencer—also a member of the committee—told Air Force Magazine that Blue Star Families was the first person or organization to ask about how his race informed his and his family’s personal experience since he first joined the military.

Floyd’s and subsequent unrest has also shed more light on the struggles of undocumented immigrants and families being separated at the U.S.-Mexico border—issues that Herrera-Yee said also impact military families—and made Latino troops and their families feel more seen.

At the end of the day, minority troops and their families don’t exist in a bubble, Spencer said.

The initiative’s primary aims are to ensure that military families of color are informed about the support resources and programs at their disposal and to create a pipeline of leaders of color to support this diversity effort.

The initiative will also do community outreach and engagement and “cross-sector group of organizations,” the nonprofit writes.

The initiative is getting training, financial, or other support from groups including the Bush Institute, the Bob Woodruff Foundation, the American Red Cross, Syracuse University’s Institute for Veterans and Military Families, Starbucks, Lockheed Martin, the McCormick Foundation, and Craig Newmark Philantrophies, she said.

Spencer and Roth-Douquet agreed that military service organizations don’t have the luxury of ignoring the issue of racial inequality anymore.

“I don’t think this is a two sides issue,” he said. “I think it’s an American issue, it’s a matter of our society, continuing to move forward, and continuing to recognize, and, you know, treat everyone with dignity and respect.”