Skip to content
A mockup of Sukhoi’s “Checkmate” fighter is readied for display at the MAKS air show outside Moscow in this image circulated on the internet. The new fighter is set to be officially unveiled July 20. Images from @Сообщений / Paralay-Forum.
Expand Photo 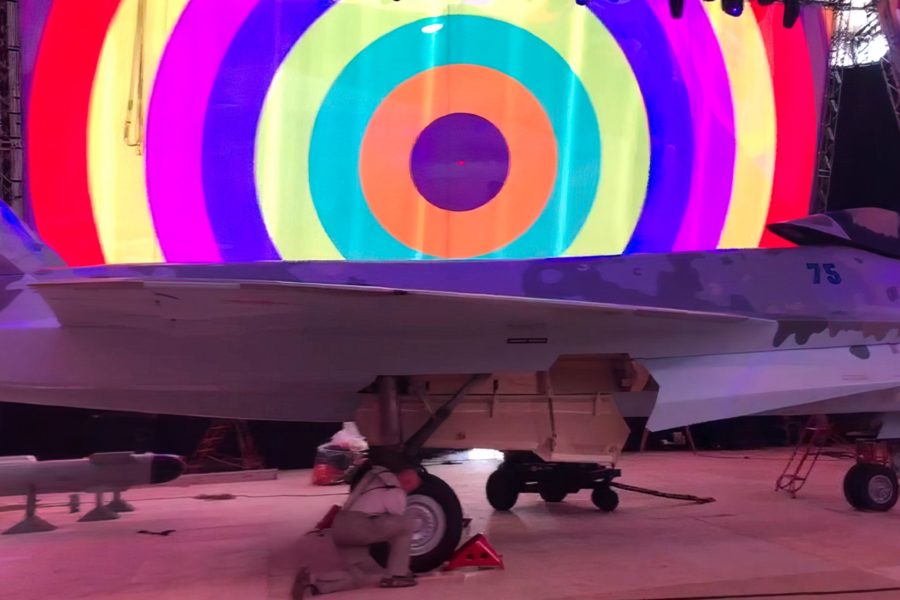 The new Russian single-engine fighter in the F-35 class—a field that is getting crowded—echoes designs dating back to the Joint Strike Fighter competition of the 1990s; ironically, borrowing most from the two concepts that lost that contest.

The Checkmate fighter from Sukhoi is to be officially unveiled at the MAKS airshow near Moscow on July 20, but leaked photos of a mockup in the exhibit hall, and fast-edited clips from promotional videos released by Russia’s United Aircraft Corp., appeared on the internet in the last few days.

The images show an aircraft with a large angular chin inlet reminiscent of Boeing’s X-32 contender in the JSF contest ultimately won by Lockheed Martin’s F-35 and also on China’s J-10B.

Checkmate also seems to have a short, clipped delta wing, which does not extend to the tail; again, like the X-32. The jet has two canted elevons rather than a standard empennage of stabilizers and elevators, harkening to both the X-32 and McDonnell Douglas’s JSF entrant, as well as to the YF-23 on which McDonnell Douglas was partnered with Northrop. The YF-23 lost out to the Lockheed Martin F-22 in the Advanced Tactical Fighter competition, and McDonnell Douglas’s loss in the must-win JSF contest was a major factor in the company’s 1996 merger with Boeing.

Like its larger Su-57 stablemate, the Checkmate has a bubble canopy that slides back, and its infrared search and track feature is mounted on the windscreen, as it is on all recent MiG and Sukhoi fighters. However, UAC has shown images online in recent weeks of a faceted electro-optical aperture like the F-35’s, seemingly mounted on the underside of an aircraft. Other images that have circulated on the internet showing portions of the Checkmate have revealed sawtooth edges on the otherwise round exhaust, very similar to those on the F-35’s F135 engine.

In the leaked airshow image, a starboard weapons bay is open. Narrow and long, it suggests capacity for just one long-range air-to-air missile, or perhaps multiple, small, tandem-mounted air-to-air missiles in the R-60 Aphid class. The jet may also have a large ventral weapons bay, but this is not clear from the image.

The width of the nose is hard to ascertain, offering no clues about the capacity of what will surely be an active electronically scanned array radar. The aircraft may also make use of sensors or radar mounted in the LERX and wing leading edges.

With a thick wing root and heavy twin “booms” under the twin tails, the aircraft may have high fuel capacity. No external stores or fuel tanks were shown on the aircraft.

A KH-59MK anti-ship missile is also visible in the airshow image, but it’s not clear if its presence is meant to indicate it’s a primary weapon of the Checkmate. The missile might just fit in the Checkmate’s narrow side weapons bay.

The MAKS mockup is painted in a blue-gray “spatter” scheme not very similar to those seen on previous Russian jets, such as the Su-57. The scheme bleeds slightly over the sharp edges onto the light blue underside.

In a UAC video ad released in the last week, putative pilots from Argentina, India, the United Arab Emirates, Vietnam, and other countries are shown expectantly awaiting the arrival of the Checkmate, suggesting it is an export fighter targeted at these countries, or that UAC is seeking a financial partner among them to develop and build it.

More images of the aircraft will allow a better analysis of whether it is intended to have all-aspect stealth—unlikely, given that its more expensive stablemate, the Su-57, is not stealthy in all aspects—or whether it has only been optimized for forward-quarter, low, or reduced observability.

The Checkmate joins a lengthening list of aircraft competing in the F-35’s category. Korea is developing a twin-engined F-35 lookalike called the KF-21, billed as a generation 4.5 fighter but lacking internal weapons bays. Turkey’s twin-engined developmental TF-X also resembles the F-35, as does China’s twin-engined FC-31. Britain’s Tempest combat jet design is similar to the F-35 in its nose area but has more of a delta wing. Japan’s F-X fighter is more in the F-22 class, and a consortium (France, Germany, and Spain) is developing the Future Combat Air System, billed as an advancement over the F-35, which in mockup form resembles a more streamlined and flatter F-22.

UAC’s website shows a countdown to the Checkmate’s unveiling, suggesting it will be midday July 20.