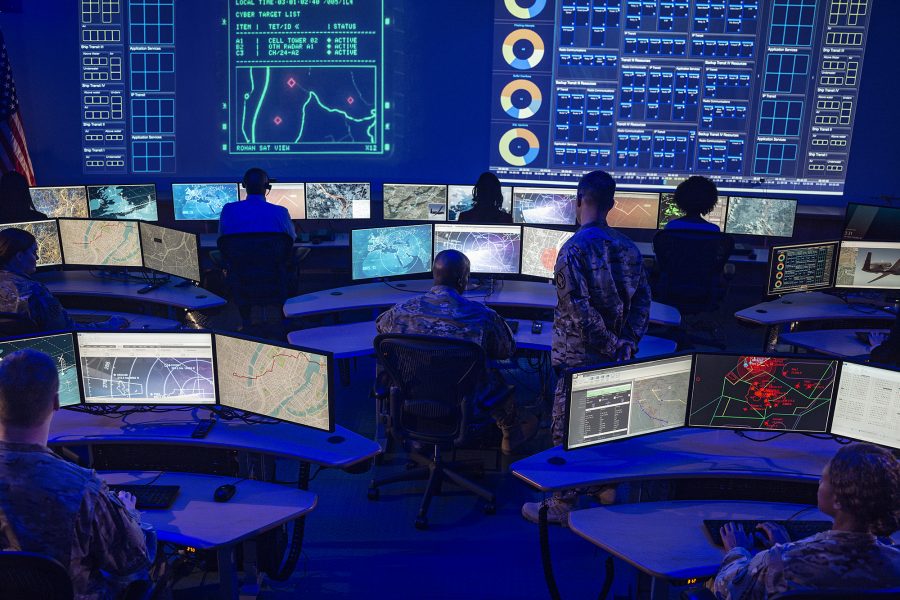 Three U.S. bombers are tasked with taking out multiple missile launchers in a dynamic and highly contested environment, as a mix of manned and unmanned support aircraft fly nearby. As the scene plays out on an oversized screen inside a command center, square boxes represent tasks to be accomplished and a heat map overlay indicates where it is and isn’t safe to fly, the red zones deepening as the bombers approach; a second screen catalogs mission tasks and available assets.

This is DA/RC—for Distributed Autonomous/Responsive Control—and with it Northrop Grumman aims to shed light on the joint all-domain command and control dilemma.

DA/RC knows the capabilities of every asset—what sensors and weapons each carries, how much fuel is on board, and where they are—and it applies that knowledge as aircraft bid on the tasks to be done. The aim is to select the asset best suited to each given mission, enabling a relatively few operators to manage and control many aircraft at once.

Employing a sliding scale of autonomy, DA/RC can be fully automated in case communications are disrupted, automatically taking changes into consideration, and generating new routes or reassigning tasks; it can also function as a fully manual process or somewhere in between, in which case operators must approve its suggestions to change tasking orders.

The aim is to never overwhelm the operator with data. “It is essentially a battle manager on steroids,” said Bryan Lima, Northrop’s director of future battle management.

Northrop has been working on DA/RC for 15 years, long before the Air Force canceled the E-8C Joint STARS recapitalization in favor of an open architecture family of systems it’s calling the Advanced Battle Management System. But DA/RC has really started to evolve over the last five years as ABMS picked up momentum and the services rallied around the concept of improved joint all-domain command and control.

The company envisions the DA/RC software as a “critical component” of ABMS in helping to piece together air, ground, and space sensor data. Northrop says it is in active discussions with the Air Force to incorporate it into the next round of ABMS experiments.

“We’re working very closely with the Air Force and pulling from our heritage of battle management,” said Lima, who previously worked as Northrop’s JSTARS program director.

Following USAF’s lead, DA/RC is designed to be completely heterogenous, so other companies’ components can plug in to take advantage of the system. Northrop has tested as many as 100 different systems networked together in a simulated environment and around 10 in a live scenario.

“I don’t think we’re trying to make money on people buying DA/RC,” said Scott Winship, vice president of advanced programs at Northrop. “It enables the kind of systems we sell. … I’m tired of people saying you can’t do that with an unmanned vehicle because it’s stick and throttle. That’s not true. Autonomy is here. You have to choose to use it if you want the cost out of the system.”