Skip to content
A box containing blood bags flies out of the back of a C-145 Skytruck for a study called Operation Blood Rain April 20 at Eglin Air Force Base, Fla. Bags of fresh blood were placed into a secure cooler then dropped out of an aircraft flying at a low level. The study was to see if the blood would be damaged in any way from the drop. Air Force courtesy photo.
Expand Photo 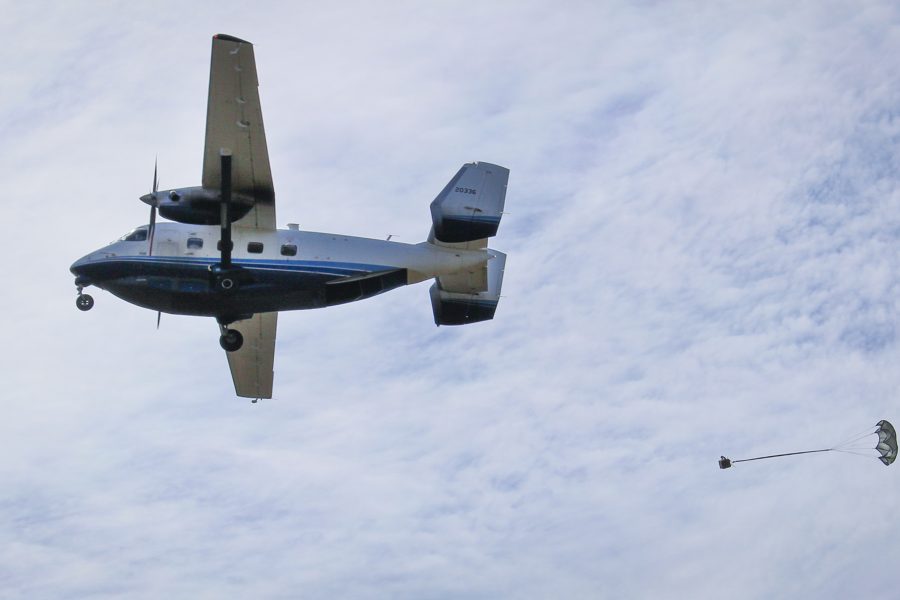 Earlier this year, the Air Force undertook an experiment to determine whether fresh blood could be safely airdropped to medics working in harsh settings.

During an April 20 test drop, USAF filled a cooler with four bags of volunteer-donated blood, attached a parachute to the cooler, and then pushed the container from a C-145 aircraft to see if the resource could survive the fall, according to a 96th Test Wing release Sept. 23.

“The C-145 passed over the drop zone at about 200 feet, flying at approximately 115 mph,” the release stated. “The loadmaster released the box of blood out of the aircraft and the parachute opened shortly after.”

After making a safe landing, Eglin Air Force Base laboratory technicians examined the blood, and compared it with a control batch of volunteer-donated blood, which was stored in vials and, notably, not dropped from any aircraft. The techs concluded that red blood cells in the airdropped samples didn’t disintegrate or otherwise break down, according to the release.

“The research team determined an airdrop is a viable way of delivering blood to combat medics treating hemorrhaging patients in a pre-hospital setting,” it continued. “However, further research is required to fully validate the safety of the method.”

The project team now plans to see if it can replicate the results of the airdrop using different airframes and ground conditions, the release said. In the long term, the group aspires to enable drones to fly blood to deployed combat medics, it added.

“These deliveries would help extend the ‘golden hour,’ or period of time following a traumatic injury when there is the highest likelihood that prompt medical and surgical treatment would prevent death,” the release said.

The experiment, which the release said “began as a dinner conversation during a combat aviation advisor team’s high altitude and cold weather training,” made it to the semifinals of Air Force Materiel Command’s Spark Tank innovation competition.

“The idea was ‘sparked’ by the time- and resource-intensive process of collecting fresh whole blood during their recent training as well as the various remote CAA deployment locations,” the release explained.

A team composed of physicians from the 96th Medical Group and combat aviation advisors from the 492nd Special Operations Wing started brainstorming the mechanics of the study in January, the wing wrote. The project’s timeline was compressed by virtue of the CAAs’ skillsets and gear, which made identifying project needs simple, the wing added.

Before Airmen actually dropped blood from the sky on April 20, teams from the 492nd Special Operations Wing did test runs using saline, the release noted.