Skip to content
MQ-9 Reaper aircrew, piloting the Reaper on its way to Aviation Nation at Nellis Air Force Base, Nev., coordinate with the Federal Aviation Administration as they transit on Nov. 15, 2019. Air Force photo by 1st Lt. Scarlett Trujillo.
Expand Photo 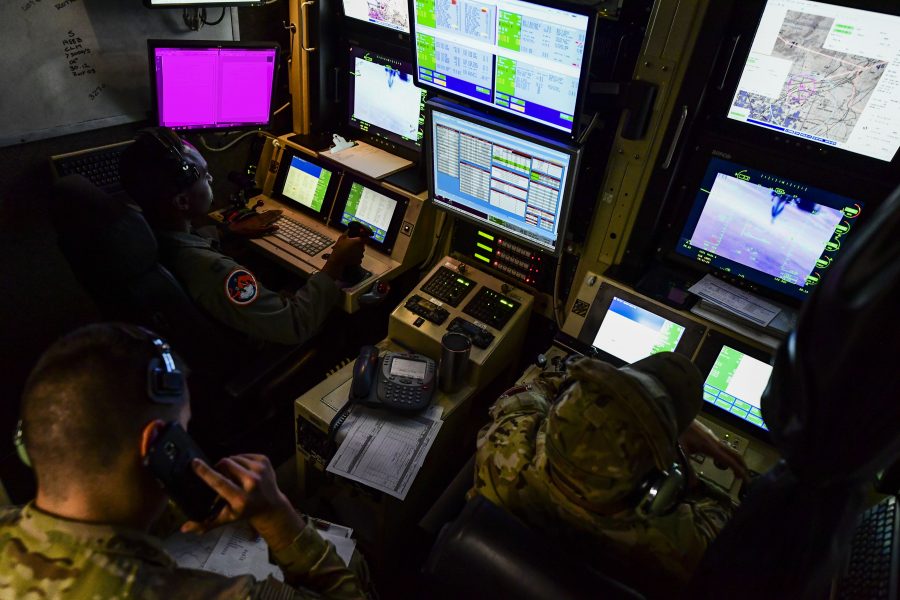 Drone pilots and their sensor operator partners are used to life in enclosed spaces. They sit side-by-side in ground control stations, or cockpits, that measure less than 200 square feet, but those close quarters make social distancing in the age of coronavirus a challenge.

Still, there’s no less demand for remotely piloted aircraft and the intelligence and airstrikes they provide, so the 432nd Wing/Air Expeditionary Wing at Creech Air Force Base, Nev., and 319th Reconnaissance Wing at Grand Forks Air Force Base, N.D., have had to adapt.

The 432nd has had one confirmed case of COVID-19, an Airman’s dependent who is in quarantine, according to 432nd Wing spokesperson 1st Lt. Scarlett Trujillo. Grand Forks Air Force Base also had one confirmed case of the COVID-19 illness related to the base as of April 15, which was contained through quarantine after the infected person came back from travel. That person has since recovered, 319th Wing spokesperson Tech. Sgt. Kamaile Casillas said April 27.

The MQ-9 enterprise is using the buddy system to limit potential coronavirus exposure. Instead of multiple people through a cockpit in one shift, the 432nd Wing is pairing people into teams of one Reaper pilot and one sensor operator who will work together for the duration of the pandemic. The wing is encouraging each pair to carpool to Creech as well because the shuttle that normally brings some Airmen to the desert outpost is no longer running.

Before the pandemic, Airmen would frequently rotate out, sometimes ending a shift with a different partner than they started with. They are spending more time flying as well: In the past, an average nine-hour shift included four to six hours of flying. Now, teams fly six to eight hours per shift so fewer pairs move through the cockpit.

First Lt. Robert, an MQ-9 pilot with the 22nd Attack Squadron, told Air Force Magazine in an April 23 interview the “hard crew” approach lets him forge a closer relationship with his sensor operator than he might have before. The Air Force did not provide his last name, citing operational security.

“Before, maybe we’d have two hours together,” Robert said. “That’s not really a whole lot of time to get to know somebody’s personal background. I’ve gotten to know my sensor a lot more on a personal level, like his family, his background, how they’re doing with all this. So it definitely allows it to grow a more personal relationship rather than just strictly professional, so that’s been really cool.”

The wing says COVID-19 hasn’t caused any lapses in the 24/7 drone flight schedule and its MQ-9 personnel overseas are operating as usual. Robert noted they are prioritizing basic flight qualification so they can get more people into operator seats, but holding off on other training like updating certifications during the pandemic.

Everyone left on base is deemed mission-essential, though that definition has evolved over time. At first, pilots and sensor operators were essential personnel. In the long run, the wing decided to expand that to include people involved with local launch and recovery training.

Robert said people are cautious around each other so as not to infect their coworkers or family members, but he’s not afraid to go to work. Creech is quieter now, with some noticeable absences like the base barber.

Global Hawk crews haven’t taken on longer flight hours, but have added a “ready Reserve” option to their day, night, and swing shifts.

“The Reserve shift is in standby crew rest, ready to come into the squadron on short notice in case we have to change out the entire force, disinfect the area, and put the new team in,” Col. Jeremy Fields, the 319th Reconnaissance Wing operations group commander, said in an email. “In a test run [at] the end of March, the proof of concept worked well.”

Members of the 319th are split into groups that are assigned to a particular schedule, so Airmen don’t mingle with people outside their own pool. Fewer people are allowed into the Global Hawk Operations Center now, and intelligence and weather support personnel are working remotely from elsewhere in the facility or in different buildings altogether. Maintainers show up for mission-essential upkeep and training, then leave.

“No sorties have been lost thus far due to COVID-19,” Col. Cameron Pringle, 319th Reconnaissance Wing commander, said in an email.

Briefings look different now, too. RQ-4 operators sometimes come in the day before flying to study their mission and receive a pre-briefing away from the operations center and their cockpits, to minimize the chance of spreading illness in those areas. Reaper crews are split into groups of six or fewer for “tiered” briefings, Trujillo said. Many squadrons are doing briefs via secure radios or phone lines instead of convening large groups in person.

When Airmen aren’t working, they’re cleaning. Creech Airmen clean their ground control stations as they rotate through shifts, wiping down controls, switches, screens, and seats. The only people who are allowed into cockpits are those who are going to fly missions. To stem the spread of the virus, Creech is funneling employees through single points of entry into buildings on base and telling people to stay out of common areas. Everyone wears face coverings.

“All personnel are required to wash their hands upon entering facilities and must use hand sanitizer prior to swiping their badge to get into any of our secure areas,” 319th Reconnaissance Wing spokesperson Lea Greene added. “Personnel are also required to wear masks at all times within operations facilities, unless they are guaranteed to be the only person working in an area.”

At the end of a shift, Robert trades his RPA controller for another kind. He plays “Call of Duty: Modern Warfare” to see his friends instead of hanging out in person, while his wife holds conversations on Zoom.