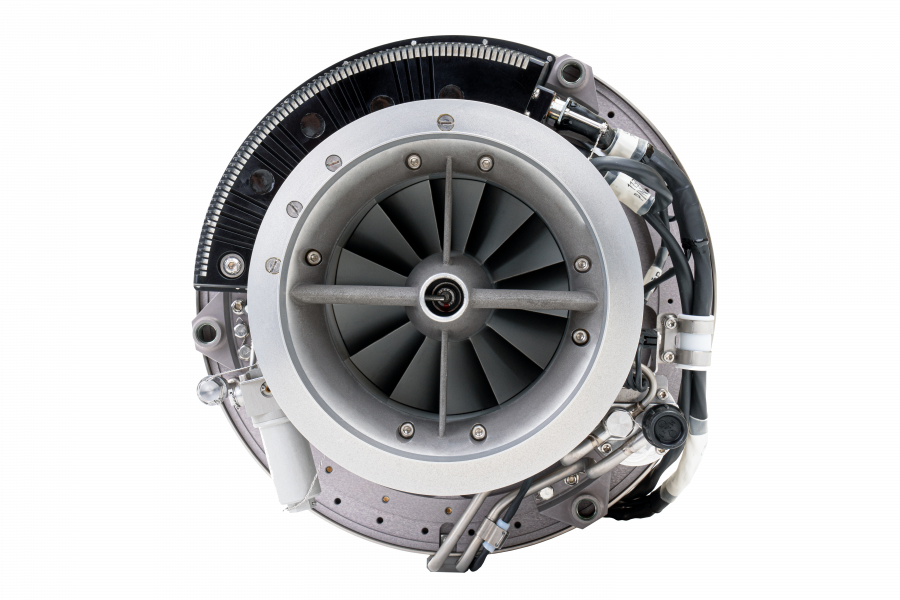 The latest addition to the PBS AEROSPACE Inc. engine’s stable is the PBS TJ100P—a response to the growing demand for a wide variety of small tactical UAVs and missile systems that require reliable engines of greater thrust, performance and lower overall cost.

PBS AEROSPACE Inc., with headquarters in Atlanta, GA, is the world’s leading manufacturer of small gas turbine propulsion and power products for UAVs, target drones, small missiles and guided munitions. The demonstrated high quality and reliability of PBS gas turbine engines and power systems are reflected in the fact that they have been installed and are being operated in several thousand air vehicle systems worldwide.

The PBS TJ100P is an oil-free version of the globally recognized and operated PBS TJ100 turbojet engine. Compared to the TJ100, the PBS TJ100P engine is lower in weight and system complexity, resulting in lower overall costs. The oil-free version makes it easier to store and operate the engine, including eliminating the need to add oil to the fuel system. The engine can be stored for months at a time with only minimal inspection and maintenance. The TJ100P engine can be operated in any position—the same as the TJ100.

The PBS TJ100P turbojet engine allows for the integration of up to 2 converters with a power output of up to 2.3kW, which means that the engine meets modern UAV system’s high-power supply requirements. This also reduces the necessary size and weight of air vehicle battery systems. The engine is started electrically and allows for in-flight starts as well. The turboshaft and turboprop versions of the TJ-100 are perfect for emerging distributed electric propulsion and other hybrid propulsion system technologies. PBS Aerospace is currently working with several smaller air vehicle primes in the development of such systems for both commercial and military applications.

The original PBS TJ100 turbojet engine is the most successful product in the PBS AEROSPACE engine portfolio. The development of PBS jet engines began in 2001 and serial deliveries started in 2004. Today, more than 1,000 PBS turbojet engines are powering both manned and Unmanned Air Systems and experimental aircraft worldwide.

The PBS TJ100 has a single-stage radial compressor, radial and axial diffuser, annular combustion chamber, and single-stage axial turbine. The engine excels in its compactness, low weight, reliability, and low fuel/oil consumption. All engine systems (except for ignition) are integrated into the engine. PBS Aerospace successfully increased thrust from the original design of 225 lbs. thrust, up to 292 lbs. thrust, and extended the time between overhaul (TBO) from 50 hours to 300 hours. Improving reliability and performance, while lowering both acquisition and operational costs, are at the forefront of PBS focus.

The engine has a starter generator, an ignition exciter system and a power supply unit with a DC-DC converter for up to 750 W. The sophisticated castings for the compressor impeller and turbine wheels, blades and vanes are supplied by the PBS investment casting division.

Frank Jones, the Business Development Manager for PBS Aerospace had this to say: “The TJ100 engine is one of the most versatile turbojet engines in the 300 lb. thrust class. The engine has over 20 different installation modifications for PBS customers. PBS Engineering takes pride in working with our customers to ensure the proper form, fit and function and successful ongoing operation of the engine for each air vehicle application!”

The unique ability of PBS AEROSPACE to carry out in-house design and development, the manufacture and testing of the engines in accordance with global aerospace standards has greatly contributed to its enduring success on the global market. Customers appreciate not only the technical features and proven reliability of the engines, but also the ability of PBS to respond to specific customer requirements and customize the engine for unique applications.

Following a nearly 30-year career with Rolls-Royce serving customers in the Defense, Energy and Small Helicopter engine markets, Christopher Culp was recently brought onboard as the Director of North American Sales and Operations for PBS Aerospace.

Christopher has been charged with leading expansion of the PBS Aerospace product line into the DoD market space. “I am excited for the opportunity to work with my dedicated team in building trust with both large and small air vehicle Primes, their DoD customers, and the Warfighter as part of demonstrating the exceptional value and performance that the acquisition of our products can provide.”