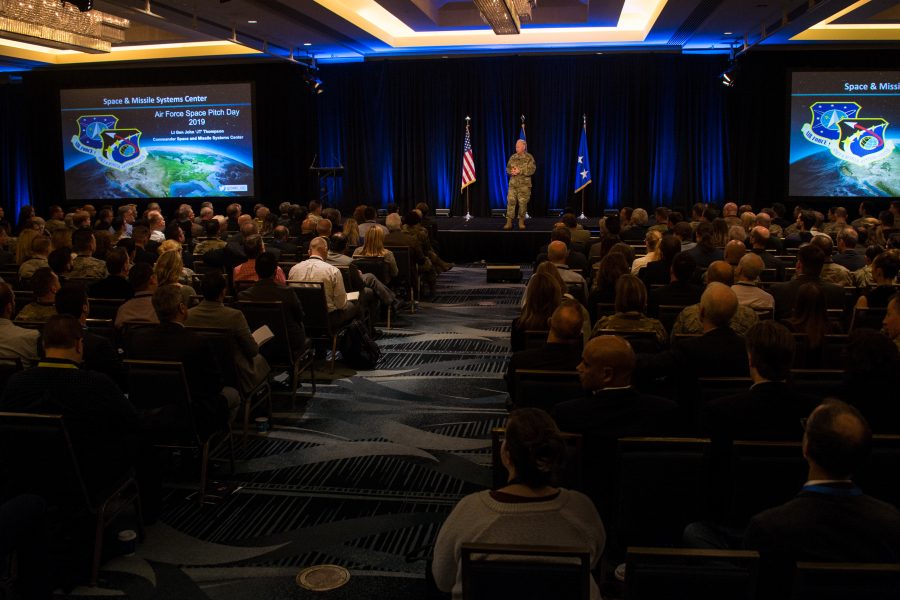 Space acquisition officials in the Pentagon will soon hold a meeting to discuss emergency measures to help the space industrial base, as the coronavirus pandemic threatens military and commercial satellite ambitions.

Within the next two weeks, key players from the Department of the Air Force, the Space Development Agency, Missile Defense Agency, and others will come together to decide how best to leverage the Defense Production Act’s support and economic stimulus funding to shore up their overlapping mission interests. They believe a united front could prove more successful when asking other parts of the government for help than if one agency were going it alone.

The pandemic comes as the space market is picking up speed, throwing a wrench into what is seen as a new golden age for space dominance and exploration. Pentagon officials are particularly concerned about emerging markets like small launch, as well as satellites and payloads for low Earth orbit, where the public and private sectors have grand plans for thousands of satellites that would bolster mass communication and defense missions on Earth.

“We’re all worried about the space industrial base during COVID-19, especially the smaller suppliers who are at risk and especially vendors who are reliant on commercial capital,” Air Force acquisition boss Will Roper said April 16. “We do see a hesitancy and conservatism starting to enter the market with all the uncertainty with COVID-19. Now is the time for the government to take a bold move and stabilize those markets.”

Commercial space products and services were valued at nearly $230 billion in 2018, comprising slightly more than half of the total space market, according to the Space Foundation’s latest annual report published in February.

Commercial companies are at the core of the Defense Department’s plan to rely more heavily on startups and nontraditional defense contractors, who are driving down the cost of space access and technologies. Those private-sector satellite constellations can bolster the military-unique networks largely managed by the Space Force, and are a major focus of the Space Development Agency’s idea for several new layers of military and commercial satellites that aid national security.

One issue is whether the supply chain could support the demand of global plans for space in the first place; another is how many satellite builders and suppliers will remain once the pandemic is under control.

The first question is under review at the Space Development Agency. The organization kept a close eye on the supply chain to begin with, but now says it has a “fiduciary responsibility” to understand how its prospective vendors get their parts and how they might be affected by the coronavirus. SDA wants to get ahead of those risks before program schedules fall behind.

Right now, SDA argues the supply chain can keep up with demand, and an initial batch of satellites known as “Tranche 0” will stay on track to launch at the end of fiscal 2022.

“With recent changes in the commercial market, and COVID-19 disruptions to the venture capitalist market, SDA is confident that the supply chain is now more than sufficient for SDA to achieve its goals,” the agency told Air Force Magazine. “As the aerospace sector rebounds, companies which were idled as a result of COVID-19 will likely rebound to support the increasing tempo of the aerospace sector.”

That’s a shift from a draft request for proposals SDA published March 26, which noted that the agency’s internal studies have suggested that supply chains “cannot currently handle the number of mega-constellations under development.”

But the space market constantly changes, with major players like OneWeb recently filing for Chapter 11 bankruptcy and once-promising suppliers like Alta Devices shutting down to look for new investors in its solar cells. Fewer satellite vendors require a smaller supplier base to meet their needs.

“SDA recognizes the complexity of the small satellite supply chains,” added Tim Boudreaux, the technical lead of the agency’s data transport group. “Prior to COVID-19, SDA’s internal analysis suggested that supply-side economics would allow new manufacturing entries into the small satellite market. These new entries would alleviate any deltas between supply and demand.”

The National Defense Industrial Association and Aerospace Industries Association, which represent the space industrial base, declined to comment on whether the supply chain can keep up with future demand.

A global pandemic puts new and unique pressures on the companies that comprise the new space age. Are venture capitalists willing to fund new vendors? How will quarantine rules impact established parts of the supply chain, like production of the star trackers that help position satellites at Italy-based Leonardo?

Ideally, SDA wants the aerospace market to rebound as sharply as it has dropped. Brian Weeden, a space policy expert at the Secure World Foundation, believes we’ve only seen the tip of the iceberg of companies that won’t survive the pandemic, especially as investors shy away from doling out seed money. He thinks those that are most likely to make it are the companies that have already secured government contracts or that hope to have new government work to fall back on.

Tournear argues it’s SDA’s role to create the market that can end up supporting those companies, saying he believes industry will answer the call and be able to ramp up satellite production when needed. Second- and third-tier suppliers face a greater challenge, he added.

“A lot of the long-lead items right now for these satellites are still solar panels; the optical crosslinks are still somewhat of a development item,” Tournear said. “For [Overhead Persistent Infrared missile-warning satellites], you have focal planes, and then the attitude determination, and control system, and flight computers are also long leads. But it’s not something that I think is completely out, that industry won’t be able to achieve.”