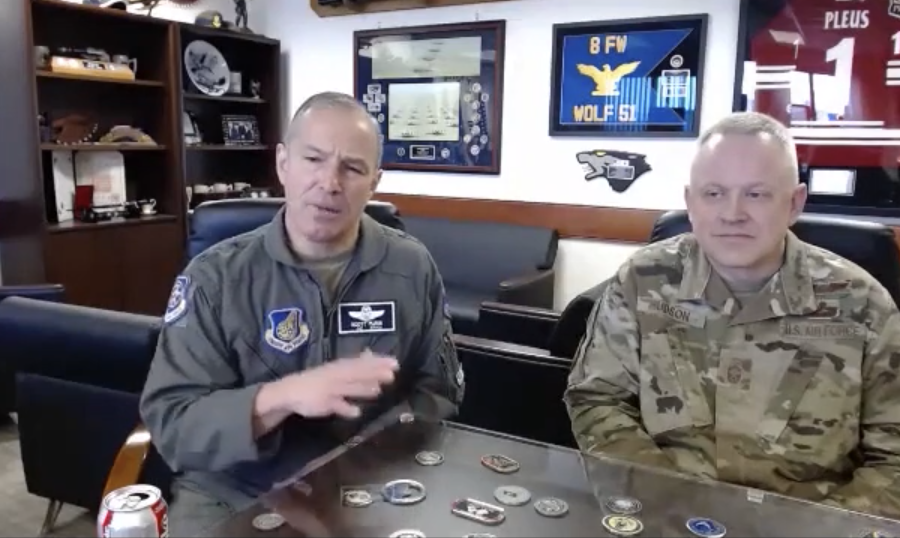 Pleus: US Capitol Attack Reverberated on the Korean Peninsula

While the Jan. 6 attack on the U.S. Capitol Building happened thousands of miles and a literal ocean away from his office at Osan Air Base, South Korea, 7th Air Force Commander and U.S. Forces-Korea Deputy Commander Lt. Gen. Scott L. Pleus said the event’s aftershocks were felt on the Korean Peninsula.

“People … here are watching, just like people all across the world, right?” he said during a Feb. 2 installment of the Air Force Association’s “Air and Space Warfighters in Action” virtual discussion series. “So for all of us that are … deployed, whether we’re PCSed or we’re actually … in a deployed status, what happens in the United States affects us, because that’s where our families are, that’s where our hearts are, that’s the flag we wear, that is the flag we gave an oath to. And when you see something like that where you see extremism, it is not only incompatible with our service, it goes against our moral fabric.”

Chief Master Sergeant Philip B. Hudson, 7AF’s command chief master sergeant, added that conversations have been happening within “private organizations” in the Osan community—including its AFA chapter—about how the events of Jan. 6 uniquely reverberated with different people.

Hudson said he observed multiple cases in which people who might’ve thought they were in opposition to one another came to realize they shared a perspective but “just had different words to describe it.”

“As long as you know that … we[‘re] all over here for the same reason—one is for ‘fight tonight’ and defending South Korea, our partners, but also, to represent America, and the very best of America forward in a foreign country,” he said.

Hudson praised Osan’s Airmen and Guardians for keeping the Air Force’s core values front of mind and putting them into action, both in their host-nation interactions and with each other.

This is the very attitude that Department of the Air Force leaders encouraged Airmen and Guardians to espouse in a Jan. 13 letter condemning the attack.

“As military and civilian Airmen and Guardians, we have a job to do,” the letter stated. “Guided by our core values, the American people expect us to be disciplined and focused on defending our country. Our actions build the sacred trust placed in the military by American citizens, but our actions can also erode our credibility as an institution. You are called to exhibit conduct of the highest standard.”

Pleus credited former U.S. Forces-Korea Commander Army Gen. Robert B. “Abe” Abrams with creating a safe space for American citizens under his purview to share their candid feelings about hot-button sociopolitical issues following the killing of George Floyd in police custody last May.

“From the very beginning, here in 7th Air Force and U.S. Forces-Korea, Gen. Abrams has made it absolutely clear that our American citizens have the right to publicly discourse with what is going on, and more importantly, that they have the ability … to do that as a common standard procedure here on the Korean Peninsula,” he said during the webinar.

To facilitate this, Abrams got formal permission from Washington to host protests within USFK facilities, a move that Pleus called “unheard of.”

This effort paved the way for a June 4, 2020, protest at Osan and a June 11, 2020, demonstration at U.S. Army Garrison Humphreys, Military.com reported at the time.

“We mentioned the tensions can be pretty high here in the Korean peninsula, and Gen. Abrams … said, ‘Hey, we are not immune just because we’re not in the country from this kind of discourse causing a problem … to our readiness, to our morale, and to the fabric of our military culture,” Pleus said.