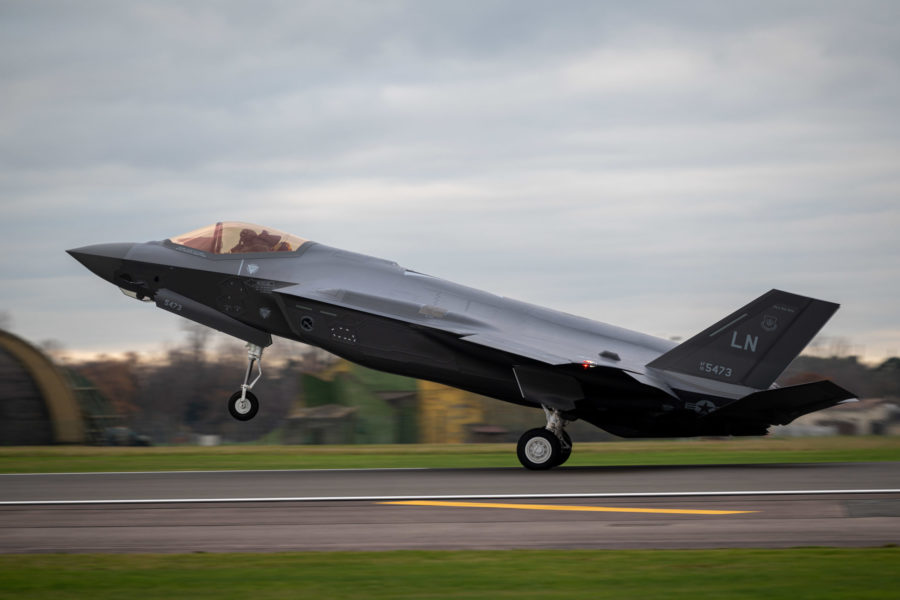 RAF Lakenheath on Dec. 15 became the first European base to receive a U.S. F-35A Lightning II, six years after plans for the delivery were announced as part of an eventual basing of two squadrons of the fifth-generation aircraft.

A 2015 decision to close RAF Mildenhall and realign its missions led to the plan to base 48 F-35As at Lakenheath, with deliveries to start in 2020. COVID-19 and base infrastructure improvements forced the timeline to slip, but USAFE still got its first F-35 before the end of 2021.

“The Valkyries are leading our F-35 integration across Europe,” said Gen. Jeffrey L. Harrigian, commander of U.S. Air Forces in Europe-Air Forces Africa, in a statement.

The 495th Fighter Squadron was nicknamed the Valkyries in 2020 for the female figure in Norse mythology who chooses who will live or die in battle.

“We’ve come a long way, and now we’re extending our reach as a coalition force and what we will accomplish together,” Harrigian said.

RAF Lakenheath’s selection was based on existing infrastructure and combined training opportunities with the United Kingdom. The U.K. is critical for training and combat readiness for Air Forces in Europe due to its participation in the F-35 program and excellent airspace, noted USAFE.

The new F-35 squadron will consist of 60 personnel and 27 F-35s, delivered in a phased approach. Lt. Col. Ian D. McLaughlin assumed command of the 495th on Oct. 1. New range infrastructure and training are projected to be in place by 2022, Harrigian previously said.

Speaking to reporters at a media roundtable at AFA’s Air, Space & Cyber Conference in September, Harrigian highlighted the number of European partners and allies choosing the F-35.

“We’ve already got some pretty good plans as we start thinking about how we leverage that capability, particularly with many of our partners that already have F-35s in the theater,” he said. “I really think it’ll be a truly important step as we continue to demonstrate the importance that the F-35 has baked into it from an interoperability perspective.”

The F-35 is the high-end fighter of choice for the United Kingdom, Norway, Italy, the Netherlands, Denmark, and Israel. Switzerland announced in June that it will purchase the fighter, and non-NATO partner Finland ordered 64 of the jets Dec. 10 to replace its aging F/A-18 fleet.