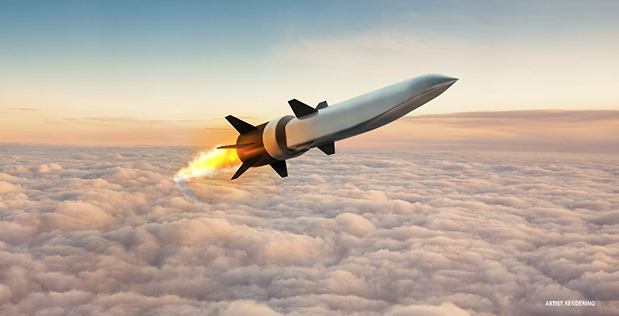 The Tactical Boost Glide program and the Hypersonic Air-breathing Weapon Concept still have value, even though the programs they support are either in source selection or flight testing, Gen. Duke Z. Richardson, head of Air Force Materiel Command, said Aug. 10.

The Air Force is pursuing the TBG and HAWC programs jointly with the Defense Advanced Research Projects Agency.

Speaking with reporters at the Life Cycle Industry Days conference in Dayton, Ohio, Richardson said the technologies in the AGM-183 Air-launched Rapid Response Weapon (ARRW) and Hypersonic Attack Cruise Missile (HACM) “are mature enough that they don’t require the completion” of the TBG and HAWC.

The ARRW is being readied for an operational flight test by the end of the year, Richardson said. The HACM is set for a source selection in September, with a contractor to be chosen from among Boeing, Lockheed Martin, and Raytheon.

“I do think there’s value in completing” the two hypersonic projects with DARPA, Richardson said.

“We can reduce risk by letting those programs run.” He said there’s a difference between “whether they’re required, or inform” the operational systems. He said the research teams and the companies building the operational missiles are “linked up pretty tight.” The HAWC has had successful test flights in the last year; both with the Lockheed Martin/Aerojet Rocketdyne team and the Raytheon/Northrop Grumman team.

However, Richardson said that continuing the TBG and HAWC will not create leapfrog technologies that will set the stage for future missiles that will go beyond the capabilities of the ARRW and HACM.

Richardson said he’s unconcerned by the test failures that have plagued the ARRW program, or as he called them, “burps.” The Russian invasion of Ukraine and China’s belligerence and technological advancement in recent years have created a greater tolerance for test failures, he said, and even Congress “gets” the need to be able to fail as a way to learn. What’s trying the patience of both Pentagon leaders and Congress is the pace of testing, which Richardson said is too slow, largely driven by lack of range space and test facilities such as wind tunnels.

“I don’t think folks mind failing. I think they just mind four- to six-month gaps between tests,” he said. “The question is … how do we get through failures faster? Because we’re going to fail.” Programs learn from failures, he said; the key is to fail quickly, fix the problem, and press on. With every failure, “we go through a process to figure out why.”

He noted that the Air Force is moving toward using Global Hawk platforms to collect telemetry on hypersonic missile tests rather than use ships for this purpose. This should speed up the process, he said.

Even so, he said “our process is probably a little more deliberate” than “our pacing challenger,” China. “We’re probably not going to have as many failures” as China does, he said. How the Air Force will use hypersonic missiles is also different than how China will employ them, he said, suggesting that a comparison with China in hypersonic progress isn’t meaningful.

Also, ARRW and HACM are different approaches to hypersonic weapons: ARRW is a glider, while the HACM will be an air-breathing system with longer range but can be made smaller than ARRW.

It will be up to “national leaders” to decide if the Air Force needs to choose either the ARRW or HACM.

“I hope not,” he said, indicating a preference to pursue both. But, “it remains to be seen.”

HACM is “trailing a little bit behind” ARRW in the development process, he said.

If ARRW works well in upcoming tests, there will be some “residual missiles” the Air Force will have available for operational use, he said. But, “if we have to burn through the residual missiles, there won’t be.” The Air Force funded 12 ARRWS in the fiscal 2022 budget.