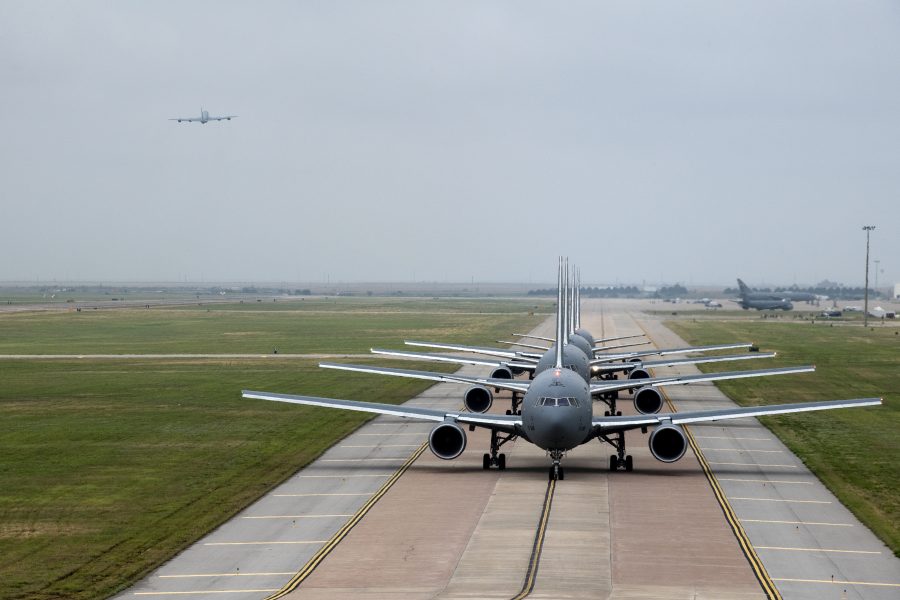 Roper: KC-46 IOT&E and Full-Rate Production Could Be Accelerated

Just a day after the Air Force announced that a full-rate production decision on the KC-46 tanker will have to wait until late fiscal 2024 due to extended testing of the redesigned Remote Vision System for tanking operations, the service’s acquisition executive offered his hope that the timetable may be accelerated by laboratory testing of RVS elements.

The service and Boeing will work with the new and improved Remote Vision System in hardware-in-the-loop laboratories—one at Wright-Patterson Air Force Base, Ohio, and one at Boeing’s Everett, Wash., facility, Air Force acquisition boss Will Roper said June 10. The new system—called RVS 2.0—will have 4K cameras, a LIDAR system for three-dimensional visualization and distance measuring; all to correct perception and distortion problems with the existing RVS.

“I’m … nursing hope that this hardware-in-the-loop environment may let us squeeze more time out of the testing,” he said, thus accelerating the completion of Initial Operational Test and Evaluation and the subsequent full-rate production decision.

“We’re going to work with our testers to see how much testing we can do virtually,” he said. If the hardware in the loop can be made “more like a [digital] twin and less like a surrogate, maybe we can do faster IOT&E when we get in there.”

He didn’t offer a guess as to how much full-up testing could be avoided with this approach.

While the Everett lab will be Boeing’s fiscal responsibility, Roper said it’s “well worth” the Air Force’s while to pay for its own similar lab “to be able to independently verify” the RVS work. He praised the company for giving the Air Force the hardware to work with ahead of the contractually-agreed timeline.

Such labs are “something that needs to be done beyond KC-46,” Roper said. “Digital engineering is going to change how we do test.”

The Air Force must buy at least 12 KC-46s a year under its contract, and can buy as many as 15 “without a penalty” in cost, Roper said. But until the RVS 2.0 is installed and tested, the Air Force cannot do the tanking mission with the jet, and it is limited to secondary missions such as flying cargo and aeromedical evacuation.

Despite these problems, Roper said it’s likely he’ll push to keep production at full rate when the time comes.

“I’m inclined to buy the 15 because I don’t want to pay more for the tanker than I have to,” he said.

The inability to conduct refueling is a frustration to Air Mobility Command, and “that’s why we’re very anxious to hold schedule with RVS, and so the discussion will be budget by budget, where we’re going to be between the 12 and the 15,” he said.

The way the program was structured “everything was awarded in one contract: the planes, the development and spares,” he said. “So, we have to keep that cadence of awards to keep that contract intact. I know that’s a frustration, that’s not optimal. But at the time it was awarded, no one thought we would be where we are with KC-46.”

Boeing has pitched an RVS 1.5 system for the KC-46, and Roper said the Air Force may allow the company to install it on some of the jets that have been delivered, at Boeing’s expense, but it is not the final solution to the problems and won’t expedite IOT&E.

“It’s kind of an upgrade to the current system, a lot of software changes, some moderate hardware changes, some field-programmable gate arrays, which are … computers with the ability to run algorithms, in the existing camera,” he explained. It can partially fix some of the RVS issues, such as the “rubber sheeting effect,” which is an unnatural distortion of the view outside the tanker’s back end, and image resolution.

Boeing will be flying RVS 1.5 within two weeks, Roper said, “and we have a variant of it in our hardware-in-the-loop simulator right now, at Dayton; our scientists are looking at it.”

Whether the system gets on USAF aircraft will be “driven by data, but based on our preliminary look at 1.5, we think it will provide some improvements, but not enough that we would remove operational restrictions.” That means that while the Air Force wouldn’t do peacetime tanking with it, the upgraded aircraft could be pressed into service in a war.

“So that is an operational choice, but whether they choose it or not, it will be Boeing’s expense to put the 1.5 solution into the fleet,” he said. “So, if Air Mobility Command wants it, Boeing has already indicated they would like to do the install.”

Roper said the Air Force is adamant that the 2.0 solution is the only acceptable one.

“It’s not going to close out operational test, because closing it out means we’re now ready to go do tanking for all operational missions at all times, and we’re not going to be there until we get RVS 2.0.”

The KC-46 has consumed more of Roper’s time than any other program since he assumed his post, but there’s nothing to be gained by an adversarial attitude with Boeing, he said.

“Coming into this job, I knew I was going to inherit KC-46,” he said. “Knowing that if we don’t get it fixed, we’ve got no good fallback option. And so I’m really trying to reset with KC-46.”

He called it “the cautionary tale in acquisition. It can teach you so much about what not to do. But it’s also a tale in hindsight.” No one who structured the contract anticipated the problems being encountered, he said, and it’s his job to “do the best that you can with it.”

“I really think we’ve done a great job with it,” Roper said, claiming to have turned it around from a “pounding on the table” argument “into science. Rigorous science. And we were able to make the negotiations so smooth because they were so numerically driven. … We made more progress in a few weeks than we had made in the previous years. And that’s what helped us get to this amazing new design that both sides agreed to. “