Skip to content
Assistant Secretary of the Air Force for Acquisition, Technology and Logistics Will Roper (left) hosts an online "Ask Me Anything" with AFWERX Director Col. Nate Diller to discuss AFVentures on Sept. 1, 2020. DOD photo by Lisa Ferdinando.
Expand Photo 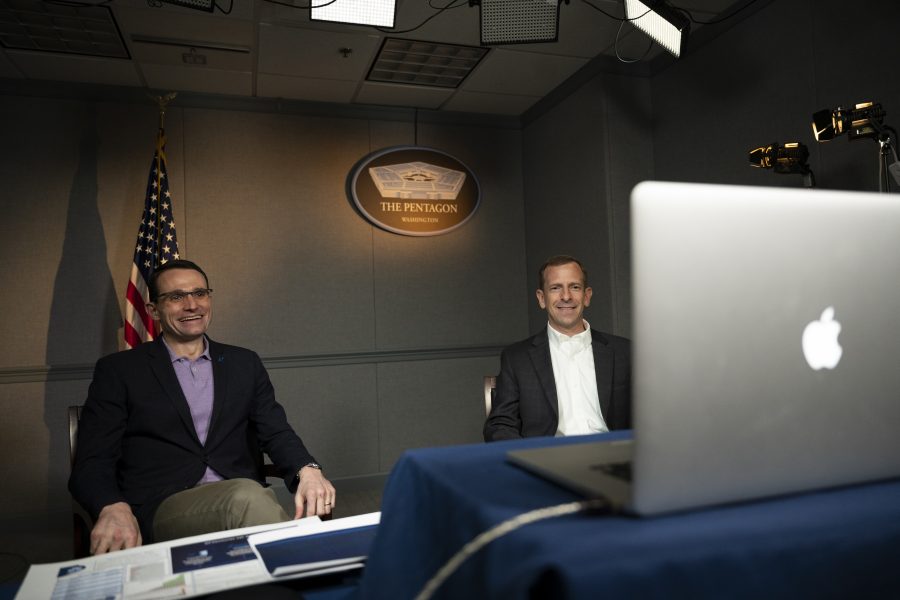 The Air Force is looking for “Skyshot” ideas—those short of a massive “Moon Shot” technology push, but much more than “baby steps” toward disruptive new technologies—that will spur industry while building relationships between the service and innovative startups, said department acquisition chief Will Roper.

In a streaming “Ask Me Anything” program, Roper said the new project will be akin to the already-underway “Agility Prime” effort, in which the Air Force is looking to develop a “flying car” technology potentially applicable to future, unmanned logistics or rescue of downed Airmen behind enemy lines. The Oct. 26 program solicited ideas for the next initiative, which will be announced at an AFWERX program in December.

Addressing small businesses, he said USAF is looking to “get you off the ground and help you take flight.” The projects the Air Force is looking for are not necessarily quick-turnaround ideas but “deep tech” that will have long-lasting, game-changing effects. The service will have the “patience” for sustained investment where the commercial capital market may not, he said, noting the Air Force can be a “de-risker” in the process.

Responding to chat messages, Roper said USAF would be interested in navigational alternatives to GPS; perhaps something that uses GoogleEarth-like data to recognize position from surrounding terrain. It’s also interested in all manner of hypersonics and has put some money toward a small company pursuing a hypersonic executive transport. The Air Force can be an incubator of such technologies, he said, noting that a hypersonic surveillance platform could work out the bugs in a future passenger-carrying system.

Other ideas Roper showed interest in were energy systems, including small nuclear powerplants; networks of new kinds of sensors, and “next-generation stealth,” which may be achieved by fooling the enemy’s artificial intelligence algorithms hooked up to its sensors, rather than reducing an aircraft’s signature.

The Air Force has no designs on owning the intellectual property derived from such investments, he said, but would perhaps want a time window where it can use the technology first, before it is commercially available.

Quantum-enabled technologies have “great potential” for Skyshots, he said, with application in computing and encryption, but also with sensing. He’s particularly interested in sensors that can “look around corners” or detect something “with a single photon” or “gravimeters” that can detect very heavy objects.

Operational artificial intelligence is another fertile area, he said, noting that USAF recently uploaded new AI software to a U-2 spy plane while it was flying an operational mission.

“We need AI hardened against adversary threats,” and “algorithmic” warfare capabilities for both defense and offense, he said. It’s a sure bet that if USAF deploys AI, an enemy “will try to break it.” This represents a “great opportunity” for small businesses.

The Air Force needs 3D printing capabilities that can yield flight-critical hardware, also, Roper said, and he’s looking for companies that can predictably certify that 3D methods using a variety of methods, machines, and materials in the same printed part will meet specifications.

“If you can solve that problem, … that has a huge return on investment,” Roper observed.

Digital engineering and digital manufacturing also represent a way to bring jobs back to the U.S. that are not affected by the availability of “cheap labor” overseas, Roper said. And “it’s not one-to-one coming back … it’s smarter, it’s more adaptable, and tailorable.”

The Air Force also isn’t interested only in traditional aerospace-related technologies such as exotic materials, for which it’s “always a customer,” Roper said, but in biological technology as well.

The U.S. “wasn’t ready for a crisis like COVID-19, and we need to be ready … for one that’s maliciously created,” Roper asserted, because the reaction to COVID-19 has shown a pandemic is a great distraction if an adversary wants to do something “that normally wouldn’t be allowed on the world stage.”

The Pentagon “is not ready” for another pandemic, and “this is an area where I need companies and investors to bring us big ideas and opportunities,” Roper said. While the Army usually handles such activities, that doesn’t “obviate” the Air Force from thinking about them, he said.

“What I’ve learned about … synthetic biology and gene editing” in responding to COVID, “makes me think the next strategic attack on the U.S. is not likely to be from conventional or nuclear weapons, but from ones we’ve never seen … before, except in great pandemics, but might have characteristics that pandemics of the past never had,” Roper said. “And if we’re not ready for that kind of crisis, then this current one has taught us nothing.”

Roper also said USAF is going to shift its process of answering operational needs away from traditional processes and towards speedier ones where new technologies are pushed toward operators.

“Right now, we’re driven from a requirement to a solution,” Roper said, where the operating parameters are stated by the user, and are “based on the warfighter understanding what they need.” But, “with technology changing so rapidly, it doesn’t make sense anymore.” The process “should shift from being requirements-based to being opportunity-based.”

If systems are “open,” meaning they can easily be reconfigured or reprogrammed, “then I don’t have to have a requirement from warfighters to bring them opportunities; things they didn’t even know they needed.”

During his time in the “classified acquisition system,” running the Pentagon’s Strategic Capabilities Office, “I think I created 53 or so capabilities; not a single one was requirements-driven,” Roper noted. “They were all opportunities that were either produced by industry or some strategist and then we found industry that could make them. We took it to a warfighter and they said, ‘absolutely.’ So that’s how this process will work.”

He said USAF is open to all such pitches—“bring them to us”—and said AFWERX “open topic solicitations … is the standard way to get us ideas.” He’s especially looking for commercial technology with potential dual-use applications that are not obvious.