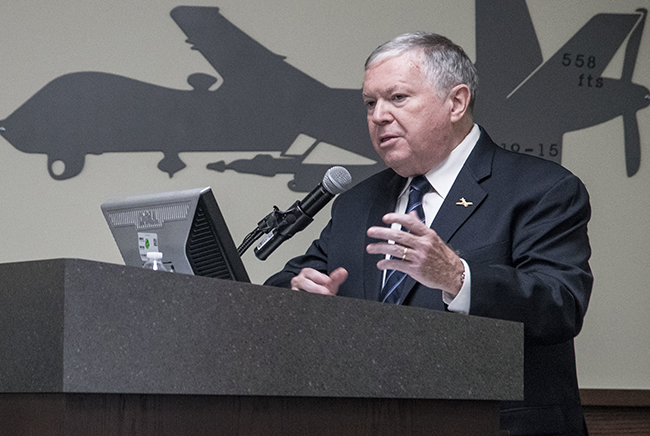 The Air Force’s sole center for undergraduate remotely piloted aircraft training, located at JBSA-Randolph, Texas, was renamed “Crawford Hall” on Nov. 13 in honor of the late Ollie Crawford, a World War II pilot and Air Force Association charter member who went on to lead the organization as national president and chairman of the board.

Crawford was also known—among other accomplishments—for encouraging the Air Force to formally recognize the efforts of the Flying Tigers, an American volunteer group in China, in the lead-up to WWII; for helping to get the Commemorative Air Force’s P-40 Warhawk restored; and for becoming the oldest recipient of a U-2 Dragon Lady orientation flight at age 84, Air Force Magazine previously reported. Crawford died on July 21 in Texas. He was 94.

James Clark, director of Air Force warfighting integration capability, who said he led the charge to immortalize Crawford at Randolph, called him “one of the most gracious, giving gentlemen I’ve had the honor to know,” in a Nov. 8 interview with Air Force Magazine.

“He always concentrated on the warfighter, on the airman, …and, you know, he loved aviation, but [he had] a true and abiding passion for our airmen and taking care of those airmen, and I saw that firsthand on many, many occasions,” said Clark, who also spoke at the Nov. 13 ceremony.

“Ollie Crawford represents the passion for his service and for his service to his nation,” he said. “If every airman could have just a thimbleful of that passion that he had and strongly believed in, it’d be even more powerful for our Air Force and for our joint forces and our nation today.”

Raaberg said that honoring Crawford in this way also pays homage to AFA.

“Personally and professionally, it’s a dedication to the Air Force Association, and Ollie would want it that way, as well as to his Air Force and to all his allied partners that he flew with and worked so closely with,” Raaberg said.

The 558th Flying Training Squadron, which heads up all undergraduate RPA pilot and sensor operator training for USAF and the Marine Corps—including three courses taught in the newly dedicated building—produces 440 pilots and 440 operators each year, AETC told Air Force Magazine.

“We at the 558th are honored that our one-of-a-kind mission can be represented by a one-of-a-kind hero like Col. Ollie Crawford,” 558th FTS Commander Lt. Col. Eric Bissonette told Air Force Magazine via email.

Clark said the airmen who pass through Crawford Hall have its namesake to thank for it.

“They’re there because of the legacy of great airmen like Ollie Crawford that made our Air Force possible today, and they are part of a very proud legacy that we hope they will continue,” he said. “I know that Ollie would be proud of those young RPA operatives coming out of Crawford Hall.”