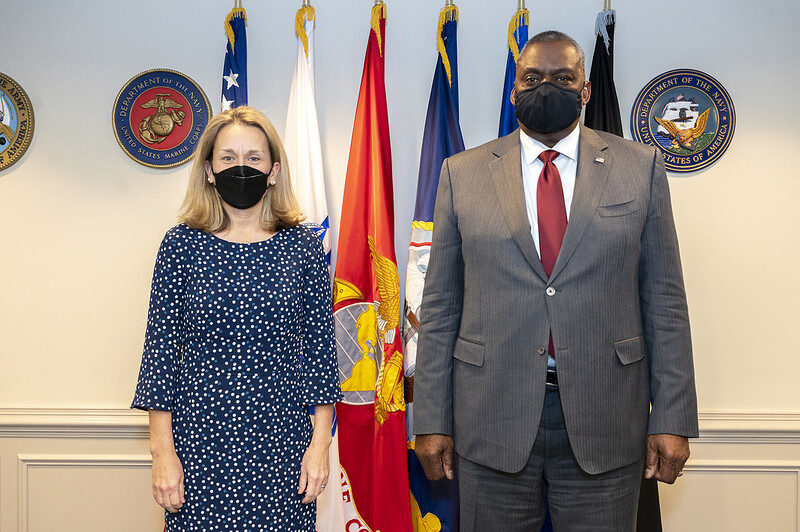 The first U.S.-Russia meeting Jan. 10 to resolve the Ukraine crisis was widely panned as an impasse, more attuned to an airing of grievances than a negotiation. Discussions now move to a multilateral phase with the NATO-Russia Council in Brussels on Jan. 12, hoping to diffuse tensions on the Russia-Ukraine border, where 100,000 Russian troops are poised.

Ahead of the meeting, U.S. Permanent Representative to NATO Ambassador Julianne Smith said the alliance was united in opposing Russia’s demands but still hoped diplomacy would lead to de-escalation.

“Let’s be clear: Russian actions have precipitated this crisis,” Smith told journalists on a press call from Brussels.

“We are committed to using diplomacy to de-escalate the situation, and we will do so in lockstep with our NATO allies and our European partners,” she added. “There is widespread unity and consensus across the alliance on the challenge that sits before us.”

“Today was a discussion, a better understanding of each other and each other’s priorities and concerns. It was not what you would call a negotiation,” Sherman told journalists on a press call 30 minutes after the conclusion of the meeting.

The White House also released a fact sheet Jan. 10 outlining its coordinated approach with partners and allies ahead of the multilateral meetings with Russia, which include the NATO-Russia Council on Jan. 12 and the Organization for Security and Cooperation in Europe (OSCE) on Jan. 13.

The document outlines three areas where the U.S. will not budge.

Smith said Sherman met with NATO Secretary-General Jens Stoltenberg early Jan. 11 and agreed on the need for Russia to de-escalate.

The Strategic Stability Dialogue meeting between Russia and the U.S. was the third since President Joe Biden met with Russian President Vladimir Putin in Geneva in June 2021.

The White House underscored Biden’s consultation with European partners, noting that the President has spoken to 16 European leaders and that Secretary of State Antony Blinken has spoken to more than two dozen foreign leaders and foreign ministers to coordinate the response to Russia’s military buildup on the Ukrainian border; and to discuss European security issues.

Chairman of the Joint Chiefs of Staff Gen. Mark A. Milley has also regularly consulted with his Ukrainian counterpart, Commander-in-Chief of the Ukrainian Armed Forces Lt. Gen. Valery Zaluzhny.

On Jan. 10, Milley spoke to Zaluzhny again to “exchange perspectives and assessments of the evolving security environment in Eastern Europe,” according to Joint Staff spokesperson Col. Dave Butler. Butler said in a statement to the media that Ukraine is a “key partner to NATO” and “plays a critical role in maintaining peace and stability in Europe.”

But Russia in recent public comments has been firm that Ukraine’s partnership with NATO should be rolled back and should never lead to NATO membership.

Still, the U.S. military holds joint exercises and training with Ukraine and other non-NATO partners, such as Georgia, against Russia’s wishes. Sherman and Smith both indicated that exercises may be one area where the U.S. can scale back if Russia reciprocates.

In broad brush strokes, Smith outlined other areas of potential common ground: “the broad themes of risk reduction, transparency, arms control, and various ways in which we communicate with each other.” Sherman had said the day before that complex issues such as arms control are long, drawn-out negotiation processes.

Defense assistance to Ukraine, meanwhile, continues, although it does not reach the level of lethality that Ukraine’s defense minister called for in a November visit to Washington, when he made a case for air defenses to deter a Russian invasion.

Pentagon Press Secretary John F. Kirby said Jan. 10 that he would provide an update on the findings of an air defense team that visited Ukraine in December.

Smith said the U.S. continues to study the security needs “of our friends in Kiev to better understand what their requirements are.”

Since 2014, the U.S. has provided more than $2 billion in security assistance to Ukraine. The annual figure reached $400 million in 2021, according to the State Department, and another $300 million is anticipated in the 2022 National Defense Authorization Act.

In past weeks, Defense Secretary Lloyd J. Austin III has spoken with eight of his European counterparts. National Security Advisor Jake Sullivan has made dozens of phone calls to his counterparts across Europe, Turkey, the Nordic countries, and eastern flank allies, and he has been in regular contact with his Ukrainian counterpart.

The White House fact sheet made specific mention of the close consultations with NATO’s eastern flank allies, who have expressed concern privately about the prospect of Russia closing in on their borders. Biden held numerous bilateral and multilateral calls in recent weeks with the allies known as the Bucharest Nine, a group of former Soviet and Warsaw Pact nations from the Baltics to the Black Sea.

Smith expressed hope such sanctions would not be necessary, but she flatly dismissed Russia’s December demand that NATO membership be withdrawn to 1997 borders and that the open-door policy for admitting new members be changed.

Despite differing perspectives from the larger economies of Western Europe to those closer to Russia in the east, Smith said the alliance enters discussions Jan. 12 with a common vision of the threat:

“Russia has essentially been the main threat to European security over the past two decades.”