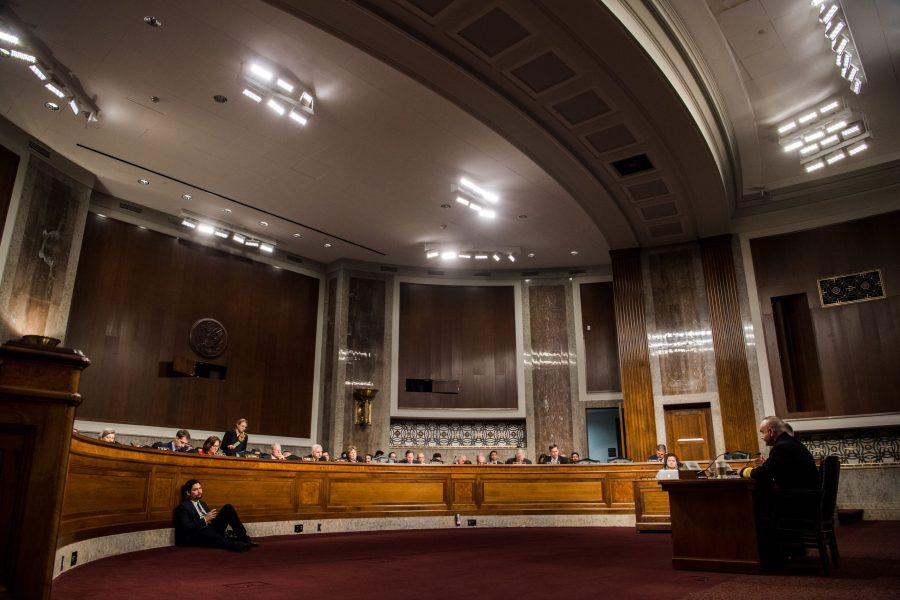 The Senate Armed Services Committee appears likely to maintain its status quo, as the prospect of Democratic control of the Senate has dimmed after Election Day.

If Democrats remain in the Senate minority, which looks more likely than pre-Election Day polling suggested, it keeps Reed from taking the helm of a committee that vets Pentagon officials, directs military policy, and sets priorities for the multibillion-dollar defense budget each year.

The GOP’s path to retaining control of the Senate runs through the chamber’s military affairs panel. Eight of the 14 Republicans and three of the 13 Democrats who sit on SASC are up for reelection this year.

Multiple SASC Republicans have fought in some of the Senate’s tightest races of the cycle. So far, the Associated Press has declared victory for four of the eight conservatives seeking reelection: Sens. Joni Ernst in Iowa, Tom Cotton in Arkansas, Mike Rounds in South Dakota, and Inhofe. That means Republicans will retain most of their sitting members on the committee.

Sen. Thom Tillis’s (R-N.C.) faceoff with Democrat Cal Cunningham was too close to call as of midday Nov. 4. That race may not be fully decided until next week, since mail ballots postmarked by Election Day are accepted until Nov. 12.

One of the most notable Republican losses this fall is that of Sen. Martha McSally (R-Ariz.), who was ousted by NASA astronaut Mark Kelly. McSally is a retired Air Force colonel known for being the first female Airman to fly in combat, as well as for her vocal defense of the A-10 attack plane. Last year, she notably went public with her experiences with sexual assault in the Air Force.

SASC Democrats have seen mixed results so far, with Sen. Doug Jones losing his seat to the GOP on Election Day. The Alabama Democrat narrowly won his special election in 2017 but fell by double digits to former college football coach Tommy Tuberville this week.

With most SASC members safe, and Republicans optimistic about keeping their Senate majority, committee business is likely to continue as usual—particularly if President Donald J. Trump earns a second term.

If a Biden administration continues to focus its defense policy and resources on competing with Russia and China, “that certainly argues in favor of high-end systems and capabilities,” Aboulafia said. “It’s particularly good for the B-21, and perhaps black budget funding for higher-end [intelligence, surveillance, and reconnaissance] systems and next-generation platforms.”

It’s still possible that Democrats could take the Senate or set up a 50-50 split, leaving the vice president as the tiebreaker during party-line votes. But a mixed government could play out much like the relationship between former President Barack Obama’s administration and a McCain-led SASC.

“There will still be all the classic debates ahead, such as nuclear modernization affordability and low-yield nuclear weapons,” said Mackenzie Eaglen, a resident defense fellow at the American Enterprise Institute. “But overall, the topline should be relatively stable [if not entirely flat], which is as helpful to Pentagon leaders as the amount.”

Todd Harrison, director of the Aerospace Security Project at the Center for Strategic and International Studies, said another Republican Senate will likely push back on any sharp cuts to defense spending and force Democrats to negotiate for smaller gains in non-defense areas like health care and education.

“If it’s a status quo election, I don’t think much will change in terms of defense policy,” meaning major modernization efforts and a pivot to great power competition would continue, he said.

There’s also plenty to hash out before the next congressional term begins in January. The annual defense policy and appropriations bills have been on hold for months as lawmakers awaited this week’s results, though experts differ on how much the election outcome will matter for those talks.

“The [National Defense Authorization Act] negotiations are nearly complete, independent of the presidential elections,” Eaglen said. “They can wrap the bill in three weeks after tonight. The big issues left for the chairs and ranking members will not be dramatically swayed based on the election outcomes—even with a Senate flip.”

Harrison argues Democrats may hold off on finalizing the NDAA until next year if they win the Senate and White House.

“Delaying to January would allow them to add things to the bill, like protections for transgender service, that they would otherwise have to wait another year to enact,” he said.