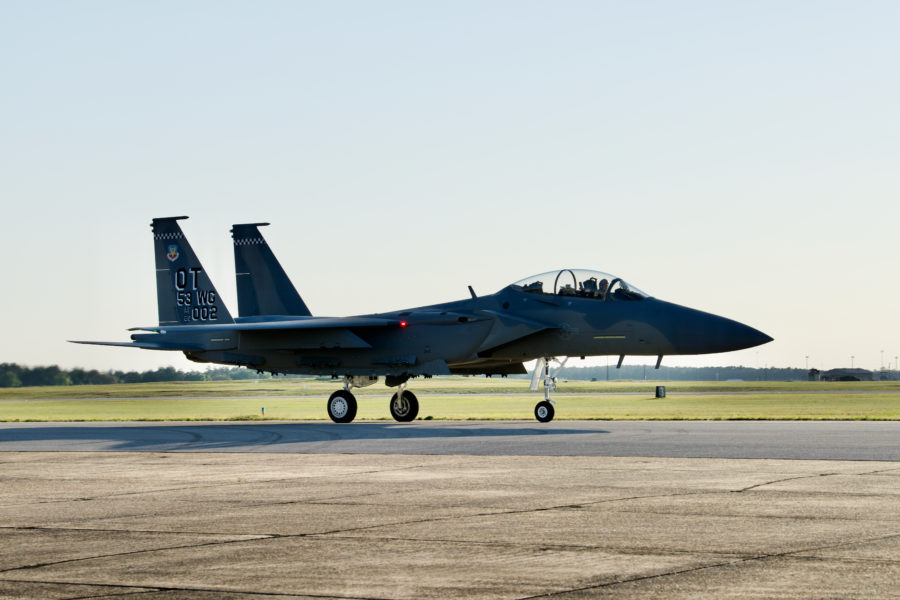 The second F-15EX Eagle II arrived at Eglin Air Force Base, Fla., on April 20, this one with a different tail flash than the first.

The new F-15, number 20-002, touched down with the “OT” tail flash used by the 53rd Wing at Eglin. This aircraft will be assigned to the 85th Test and Evaluation Squadron.

“The 53d Wing is honored to welcome the second-ever F-15EX, and we are extremely proud that it displays the ‘OT’ tail flash,” 53rd Wing Commander Col. Ryan Messer said in a release.

“However, that ‘OT’ represents more than just unit pride; it showcases the importance of early integration of operational and developmental test to directly fulfill the National Defense Strategy, which proclaims that, ‘success no longer goes to the country that develops a new technology first, but rather to the one that better integrates it and adapts its way of fighting’; a statement we believe and live out in all of our missions.”

The first F-15EX was delivered to Eglin last month. That aircraft has an “ET” tail flash for the 96th Test Wing. These are the two F-15EXs set to be delivered this year for testing by both the 85th TES and the 40th Flight Test Squadron before production ramps up. The Air Force expects to buy up to 144 of the aircraft to replace its aging F-15C/D fleet.

Future F-15EXs will head to the F-15 schoolhouse at Kingsley Field, Ore., and then the first operational base at Portland International Airport, Ore., for the Air National Guard’s 142nd Fighter Wing.

During a ceremony at Eglin earlier this month, the Air Force officially announced the F-15EX is named the “Eagle II.”

Despite just receiving the first aircraft, the Air Force is already planning its first exercise. The F-15EX will debut at Northern Edge 2021, according to Eglin. This Pacific Air Forces-hosted exercise is scheduled for May 3-14 in Alaska, and will include participants from the Air Force, U.S. Army, U.S. Navy, and U.S. Marine Corps, according to PACAF.